Dylan Playfair has that look— the one associated with James Dean and Marlon Brando, that miles-long stare that seems to rattle foes and love interests alike.

It’s no surprise then that Playfair plays an unattainable crush in indie drama Summerland, recently released on VOD. The feature debut from directing duo Lankyboy, Summerland tells the coming-of-age story of three high school friends as they road trip to the Summerland music festival. Main character Bray (Chris Ball) is determined to meet the mysterious Shawn (Playfair) after connecting on a Christian dating site. The only catch? Bray is using photos of his best friend Oliver’s (Rory J. Saper) girlfriend Stacey (Maddie Phillips) to make Shawn fall for him. 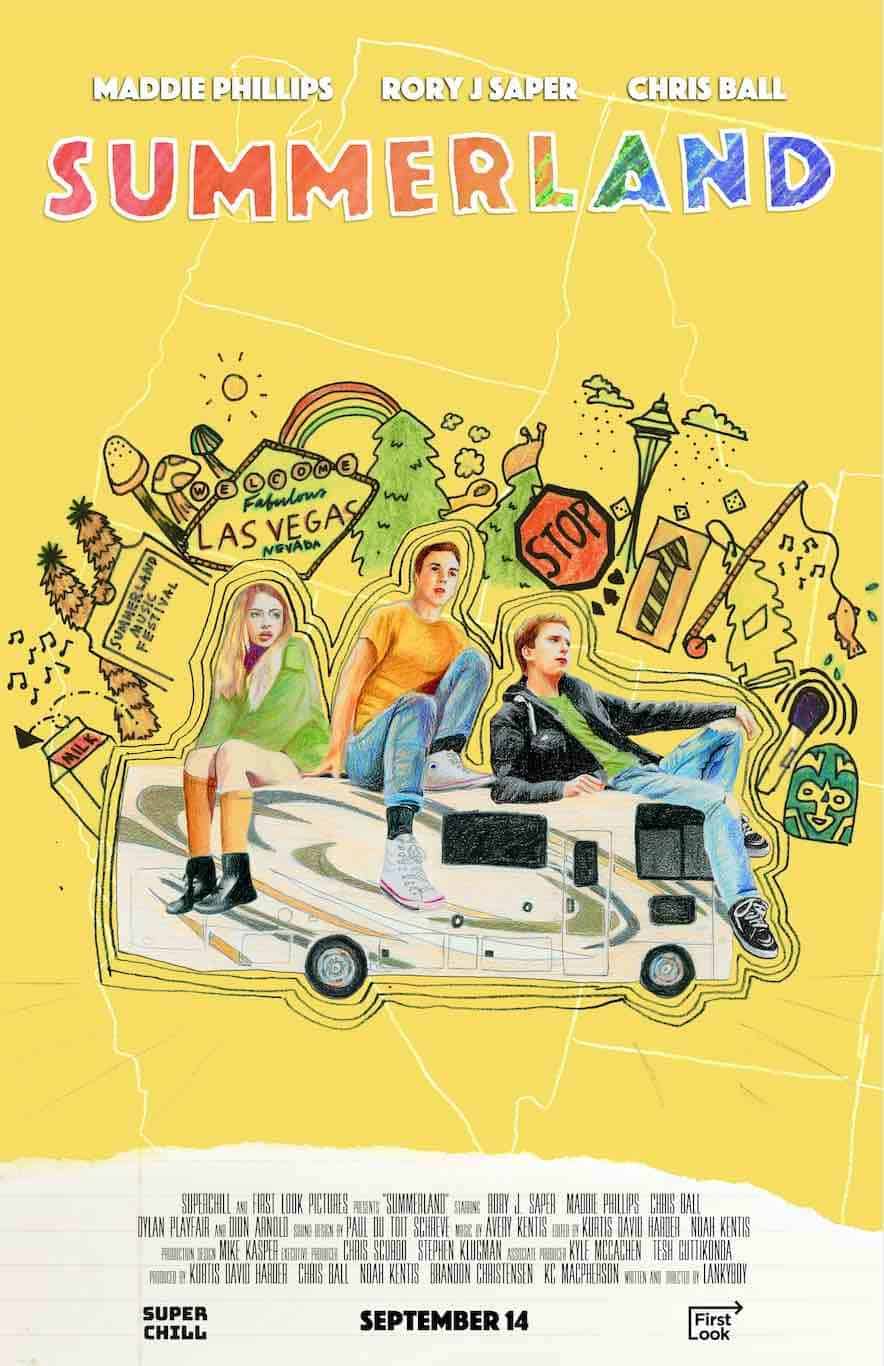 Lankyboy, consisting of Kurtis David Harder and Noah Kentis, co-wrote Summerland with Dylan Griffiths and lead actor Ball. The directors’ statement also pinpoints Ball’s own coming out story as a large inspiration for the film. Playfair, a longtime friend of Ball’s, was immediately drawn to the intimate story behind Summerland and signed on. While The Descendants followers and Letterkenny fans are already familiar with Playfair’s acting prowess, he’s just getting started.

Below, the Vancouver-based leading man opens up about filming “guerrilla-style,” his own love for outdoor music festivals, and what’s next for 2021—hint, he’s about to become a household name.

The Knockturnal: What originally drew you to the role of Shawn?

Dylan Playfair: I’ve known Chris Ball, Kurtis David Harder, and Maddie Phillips for quite some time. It’s funny, one of the first movies Maddie ever did was an indie film called If I Had Wings, and she and I got close on that film. And the first movie that I ever acted in, Chris was a production assistant on that…So I had known the guys for a while and I had known this project was being worked on for some time, and it was really a personal story for Chris. So when he reached out and asked if I was interested in coming out and filming with them, he made it very clear that it was an independent film, it was being done really guerrilla-style and low-budget, but it’s something that everyone is really passionate about. I’ve always enjoyed that style of filmmaking. I think it’s grassroots and sort of helps you ground yourself in what’s important in storytelling. I had just finished up with The Descendants 2 at that time, and I was in Las Vegas working on another project. It was only 45 minutes to drive out and do my couple of days on set [for Summerland], so I read the script and thought it was really awesome, and I said yes. 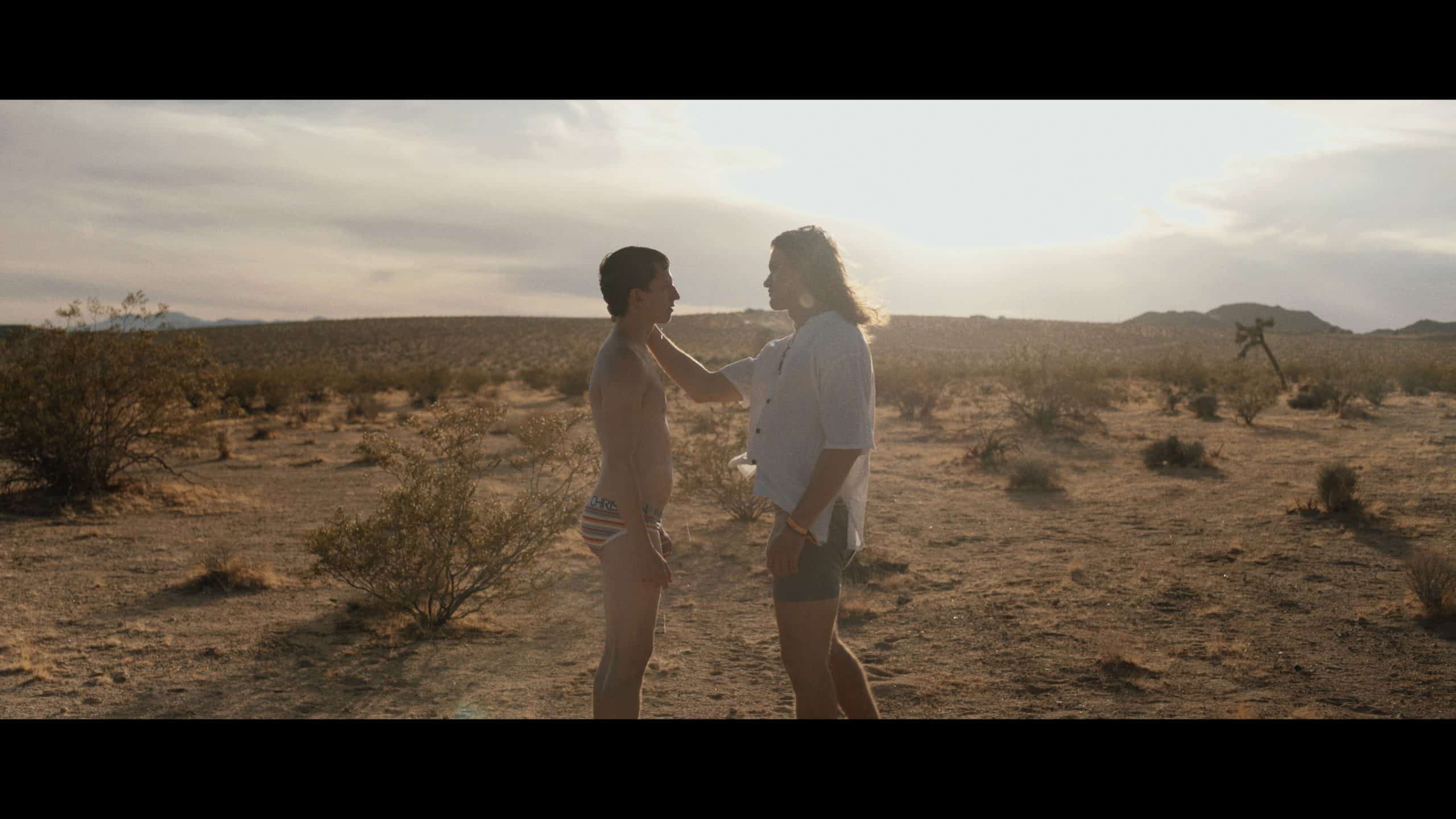 The Knockturnal: How was it working with a directing duo on set? Did that dynamic differ from some of your past projects?

Dylan Playfair: It was really creatively freeing to work with Lankyboy. They really allowed me to bring my own energy to the character and into the script. A lot of it was more trying things out as opposed to fitting this really rigid vision of who Shawn was in the story. I had discussed the lynchpin of this person being the reason why they’re going to this festival. There’s a big unseen element of it, because it’s one of the first characters we’re introduced to but we don’t see him until the end of the film. I really wanted to make sure I was fitting their version of that, of who that needed to be. When I was discussing that, Chris was so awesome. He said, “I had written this character with you in mind, so play this however you see fit, however you see Shawn behaving.” It was nice, I just got to put myself in Shawn’s position. I really had a lot of fun with it, and it was something that I didn’t really have to think too much about. Shawn’s a young guy who’s being misled. There’s not a bunch of crazy chaotic obstacles that he has to come through. He’s sort of this character who helps Chris’s character realize who he needs to be to find true love, which is yourself. I think that’s a beautiful message for anyone. If you’re true to yourself, the rest of it falls into place. That’s what I tried to bring to Shawn. 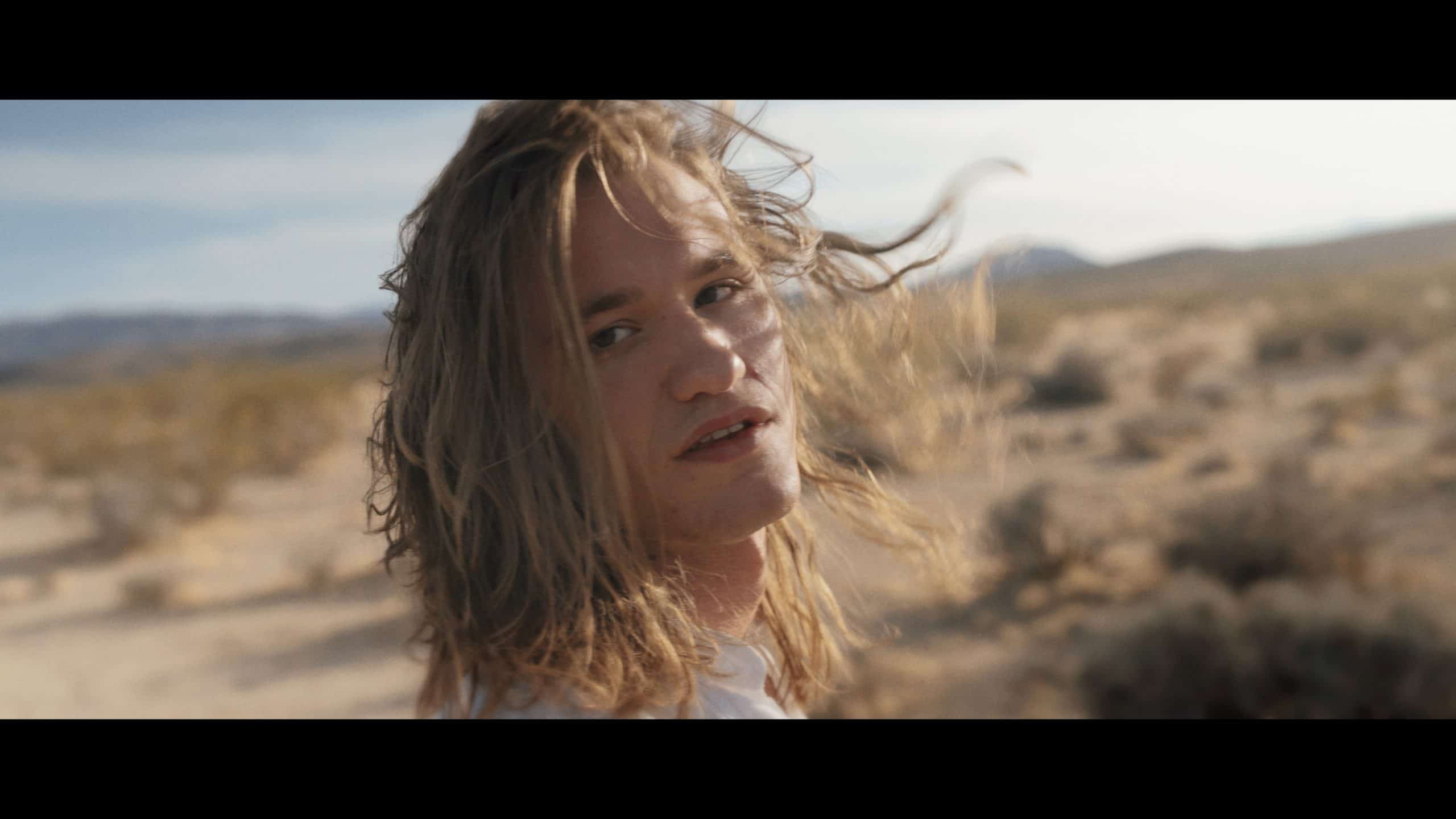 The Knockturnal: There is a sense of community that really shines through in the film. Is there anything you can share about working on set?

Dylan Playfair: Definitely. The road trip element of it was funny. A good friend of mine, Kyle McCachen, and I had gone to Burning Man around 2014. We went to film a political documentary on youth voter advocacy, why young people don’t vote. We had gone and made this film in a very similar fashion where it was run-and-gun and everyone helps out. There’s no rigid guidelines as far as what you can and cannot help with, where a lot of bigger productions, you’re doing your one thing and that’s it. So that part of everyone sort of chipping in was really cool, and then it’s a real road trip so that appeal of the film, that teen coming-of-age road trip movie, it’s all there. We’re all young adults, we’re all on an actual road trip, and the story is played out in chronological order—which is super rare to have in any project, let alone an independent film where your budget is tight. It was really about being present with the most important thing in making that film work. 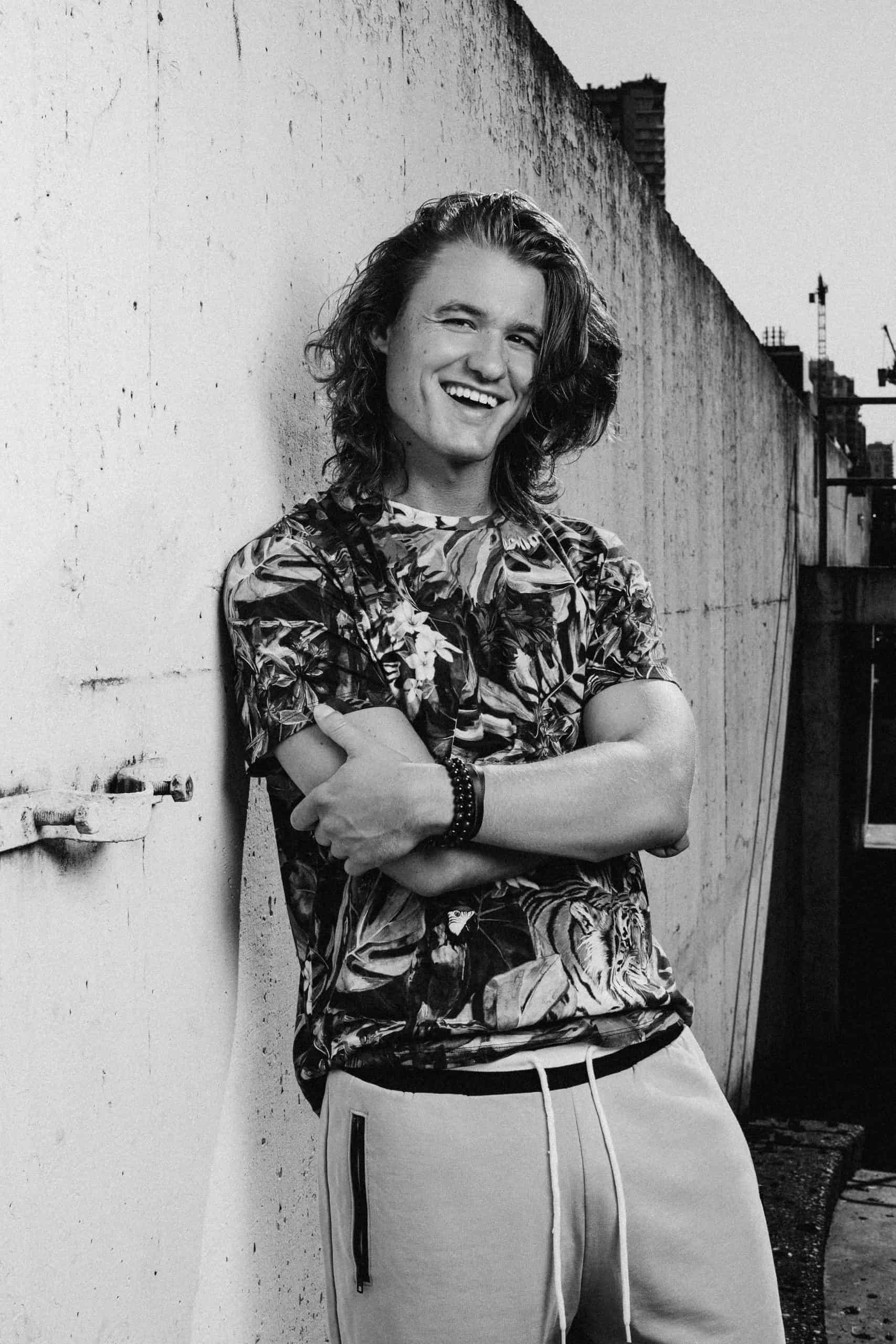 The Knockturnal: Let’s talk about what’s next for you. It was recently announced that you are set to star on the Disney+ show, The Mighty Ducks. We know that you’re also a hockey player in real life. What else are you currently working on that you can discuss?

Dylan Playfair: I think it’s the worst kept secret that I’m on Mighty Ducks! It’s one of the coolest projects that I’ve been part of because of that nostalgia equation. It’s also a really fun character to play, so I’m involved with The Mighty Ducks series which is super exciting. Letterkenny is still in production. We’ve been pushed because of COVID, so Letterkenny is still happening but it’s gone until next year. We don’t have the official dates for that yet, but it’s sort of one of those things where I had a really busy year penciled in for 2020. It was going to be a really, really chaotic year: I was going to shoot three series and two movies and get married, and COVID really threw a wrench into that plan. So when the environment of COVID is cleared up again, we’re going to try to get The Last Tour back on which was stopped halfway through with Letterkenny. The Mighty Ducks is filming right now with COVID protocol, and I’m developing a lot of stuff. I’ve been working on my career as a director during the pandemic because it’s something I have more control over, as opposed to film and TV, you’re waiting for someone else to give you the go-ahead. I have a production company called Media Button, and we’re developing television and film projects right now. We’ve done a lot of corporate commercials. That’s been my main focus in between the productions that have been put on hold right now. It’s a moving target for sure, as this whole industry is, but I think staying adaptive and staying hungry is really important.

“Summerland” is available on VOD and streaming.