A few weeks after using Dollar Shave Club’s new 6 Blade vs 4 Blade Razor Starter Set, I found myself using each blade in equal parts.
Sometimes it feels good be choosy. Now available at retailers across the country, Dollar Shave Club, considered the pioneer of the affordable razor subscription set, continues to evolve its offering with an innovative new product- well, two products really.
Dollar Shave Club has introduced the 6 Blade vs 4 Blade Razor Starter Set, an opportunity for those new to the brand and loyalists alike to test two of Dollar Shave Club’s signature offerings. Dollar Shave Club has recognized the reality that every person’s hair, growth and texture is different (just this week they launched the #MenGetReal campaign, exploring the vulnerabilities of men and grooming).
I took a few weeks to give the two blades a try. The kit includes a sturdy and tastefully-designed handle which supports Dollar Shave Club’s interchangeable heads. The handle has a good heft; it feels valuable in the hand. Each head fits into the handle perfectly.
Even for those of us who don’t grow lengthy beards or have patchy facial hair that comes in over the course of a week, both blades have value. The 4 Blade is effective for those days of growth with wiry hair. I found it extremely useful for touching up before dinner as well as cleaning up at the beginning of the week. The blades were reasonably sharp, allowing me continued use for several weeks. The 4 Blade is also good for razoring other parts of the body such as a the chest, where the 6 Blade could become clogged.
The 6 Blade worked great for more patient shaving work. I let my facial hair grow a bit longer and fill in. The 6 Blade cleared the mustache and chin with no nicks. It did require a few goes over the same area, but more to make sure everything was covered, not because the shave was uneven. The feeling after was great; nice and smooth. You’ll have to rinse the 6 Blade a bit more frequently, but the close shave is excellent. 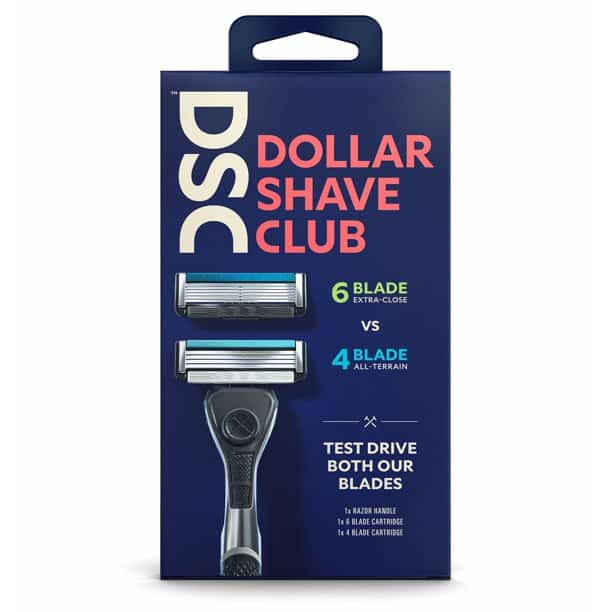 With both the 4 Blade and the 6 Blade, don’t worry about tugging or pulling. These razors remained sharp. The 6 Blade also features a built-in trimmer for hitting corners such as sideburns and near the nose.
Regardless of the blade you choose, augment your shaving with Dollar Shave Club’s hydrating Post Shave Cream. I really like it and it’s ideal for people with dry skin after a shave- particularly handy on my travel. It’s even good for those that shave in the shower, as a post-shower treatment. It was a nice addition to my routine.
The best part is Dollar Shave Club’ original mission: getting refills through their subscription program. Both blades are available in retailers, but Dollar Shave Club is best when delivered on your terms.
I found value from both options in the new 6 Blade vs 4 Blade Razor Starter Set, depending on my needs. Both are worth keeping in the cabinet for use. Give them a test drive, the kit starts at $9.99 and can be found online or at https://www.dollarshaveclub.com
6 Blade vs 4 Blade Razor Starter Setdollar shave clubdscmengetrealmens groomingrazorReviewshaving kit
0 comment
0
FacebookTwitterPinterestEmail

A Preview of the Outfest Fusion Festival

If You Love Clean Beauty, Alaffia Should Be...