NYFW’s Women on the Move: A Panel That Reflected Inclusivity in Fashion

Lindsay Peoples Wagner, Lauren Wasser and Becca McCharen-Tran spoke about diversity and defying stereotypes in the fashion industry during NYFW.

Designers, models, and members of the press gathered in the Sunken Living Room of Spring Studios on Sunday, Sept. 9 to hear from a panel composed of groundbreaking women of the fashion world.

The panel, called “Women on the Move,” was moderated by Mary Ann Reilly, the Senior Vice President of North American Marketing at Visa.

The “Women on the Move” conversation began at 11 a.m. and was one of New York Fashion Week’s many events, The Talks, as part of The Shows in TriBeca.

The three featured panelists were Lindsay Peoples-Wagner, the editor-in-chief of Teen Vogue and author of “Becoming a Fashion Designer,” Lauren Wasser, model, activist and Toxic Shock Syndrome [TSS] survivor, and Becca McCharen-Tran, the founder and creative director of Chromat. 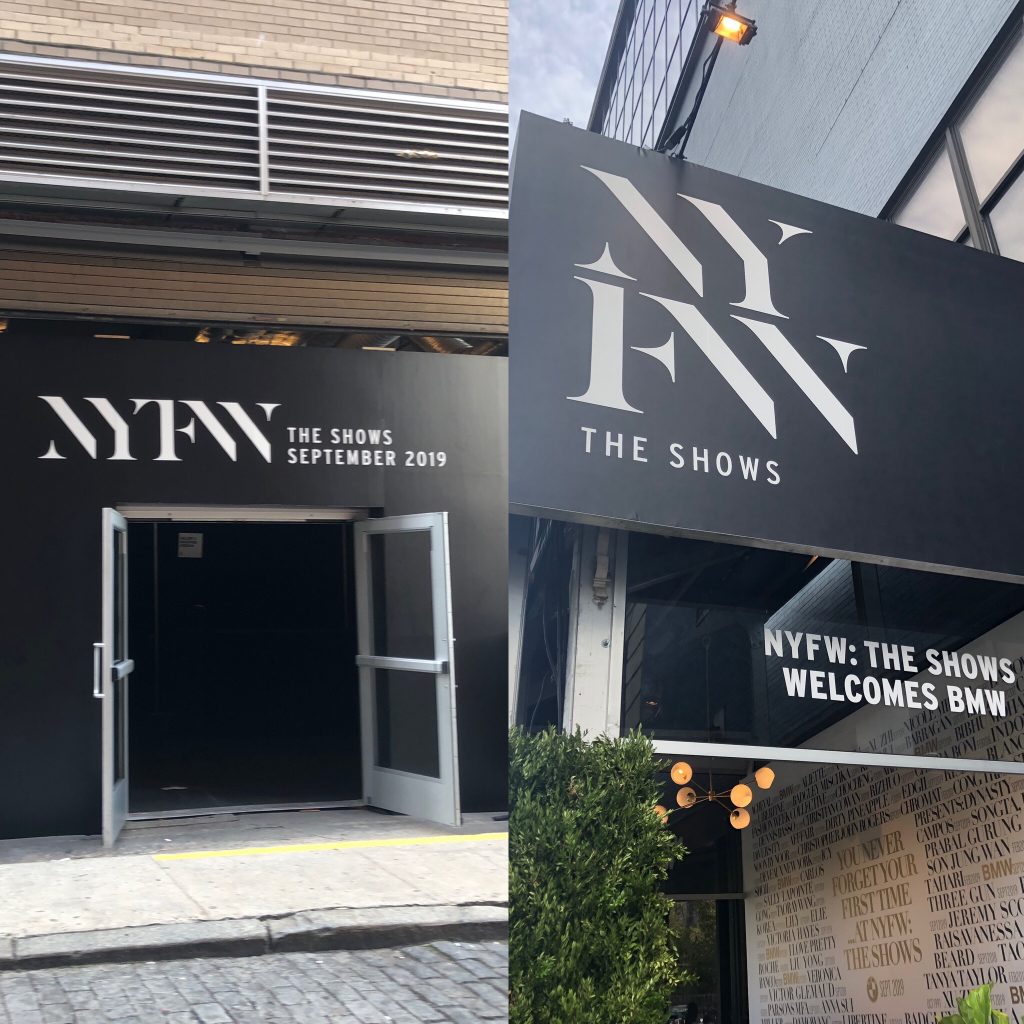 Peoples Wagner was first asked about how Teen Vogue began to include other writing topics that were unrelated to fashion. The publication continues to center much of its content around political events and news.

“Since I assisted at Teen Vogue when I was younger and I interned there, I had a different idea of what I felt like it should be,” said Peoples Wagner. “For me it was always, yes, I like fashion, clothes, and a lot of the things that we all love, but that doesn’t mean that you can’t also care about the world, and that you also can’t care about inclusivity.” 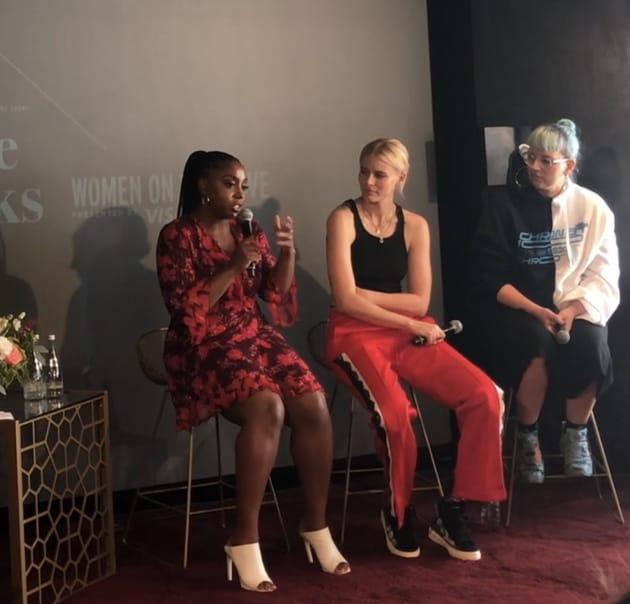 McCharen-Tran was asked about her career beginnings and how she shifted from studying architecture in college to ultimately becoming a fashion designer and founding Chromat.

“Growing up, I was interested in fashion. In a small town in Virginia, being fashionable meant going to the mall, being trendy, being skinny and looking like a model I would see in the magazines,” McCharen-Tran said. “In my teen years, I was really trapped by a single definition of beauty, and trying to aspire to what I thought should be the ideal. So many years later when I found myself working in fashion, I knew that I didn’t want to go by those same rules. I felt that if I wanted to do fashion, I wanted to do it my own way.” 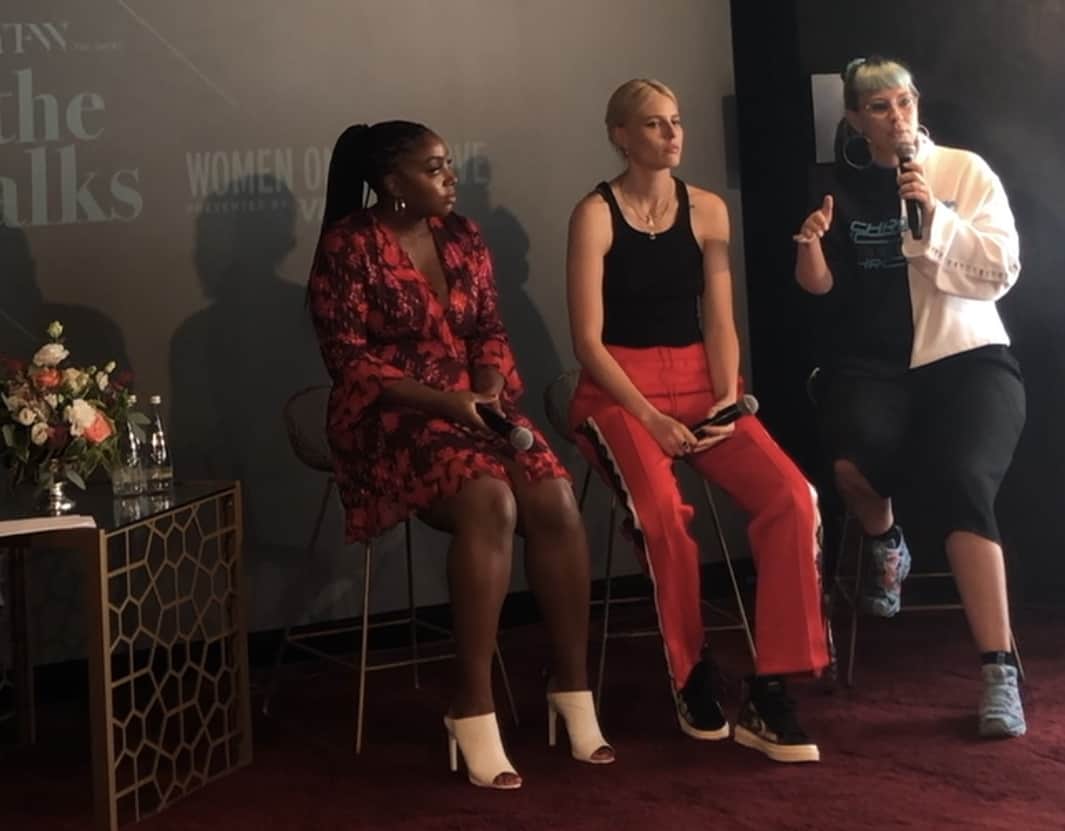 She continued to speak about Chromat’s diverse casting. Their runway show at Spring Studios earlier this week featured body-positive models such as Tess Holliday and gained traction on social media.

“I’ve always utilized the platform that we have with Chromat to celebrate people of all gender identities, of all shapes and sizes. This is how it should be. This is normal to me,” said McCharen-Tran.

“When I first started doing this on the runways here at New York Fashion Week, a lot of the press was about our casting, how bold and revolutionary it was. I think it’s more shocking and more press-worthy when people cast all skinny, white models. I think that is something people should be really shocked by.”

Wasser was asked about her modeling career, and how she became an activist for Toxic Shock Syndrome survivors. She then told her personal story of surviving the condition, losing her legs, and overcoming the difficulties that came soon after. 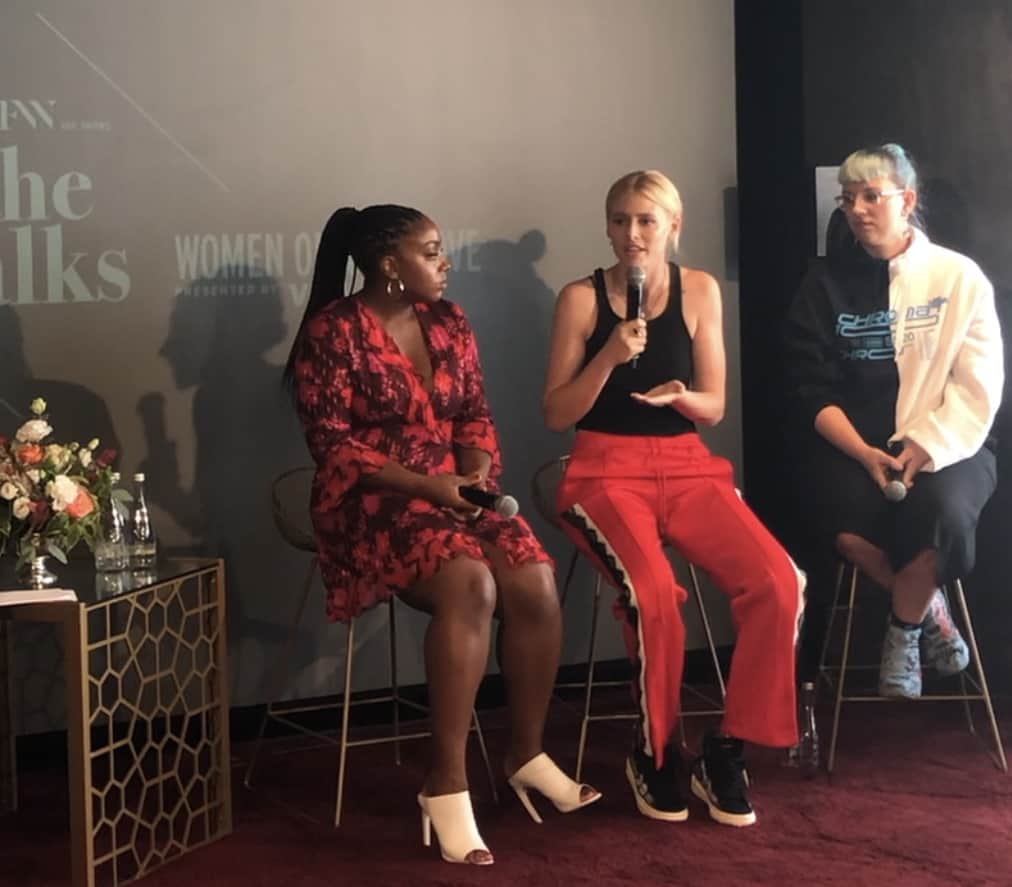 “When I was 24 I was modelling, trying to figure it all out. I then took a break from modelling [at that time] and was playing basketball. I was an athlete. I was on my period, it was super heavy and I was using super absorbent tampons, as a lot of us women do. I was using the product as I should have and I almost lost my life,” Wasser said.

“I lost my right leg, and I just lost my left leg because I have complications from the incident when it first happened. My whole journey back has been about redefining who I am, and where I am in my life. I’m back in an industry that was only seen as one-sided for so long.”

Wasser continued to speak about her parents, who were both models and how growing up in the modelling industry skewed her idea of beauty.

“Growing up with only one vision, I was sure that there was no way in hell that the fashion world would ever accept me back, this way. By the grace of God I survived, and not only that but I’m now being embraced by an industry that is definitely changing.” 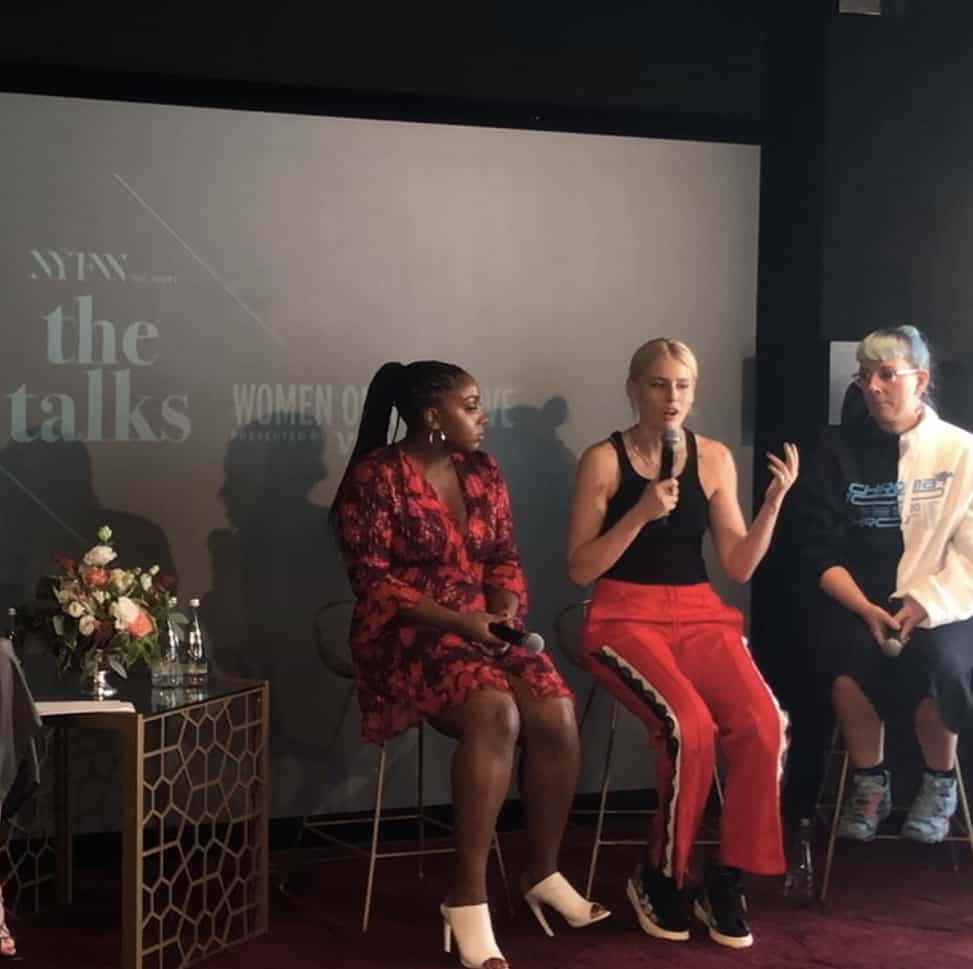 She then thanked McCharen-Tran, who she has modeled for, and spoke about how advocating for TSS survivors gave her a new outlook on life.

“I’m so thankful for Becca [McCharen-Tran] because she definitely gave me my first opportunity back when I was first coming back to the runway.  I’m now trying to raise awareness about Toxic Shock Syndrome, that it is a huge women’s health issue, getting women to be more aware about what they’re putting inside their bodies, and demanding safer products for us.”

Reilly then asked the three women individualized questions about their careers and activism.

McCharen-Tran was asked what she wished she knew when she first entered the fashion industry. She explained the importance of networking as a fashion designer.

“The people who have been there since day one are the people who are going to help you get to the next level. That’s something I’ve always wanted to remember,” she said. 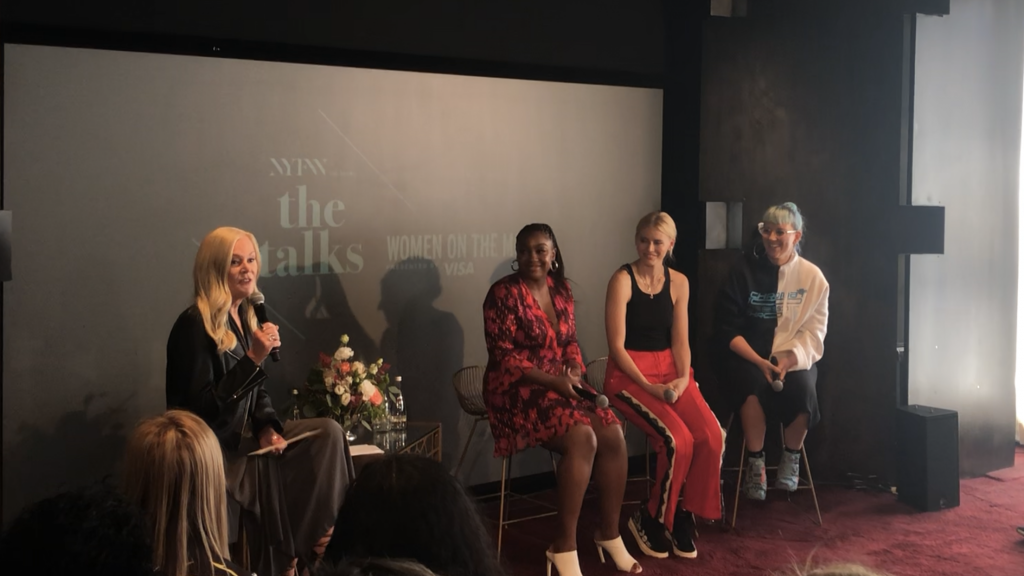 Peoples Wagner was asked how she plans to foster or mentor the next generation of Teen Vogue writers and readers, since the publication’s content is much more politically-conscious than ever before.

“If I am doing work that is inclusive and giving a platform to voices that I feel like other people aren’t covering enough, that to me is the best thing I can ever do with my life,” Peoples Wagner said.

Wasser was asked how she developed the confidence to become a groundbreaking model and athlete. She encouraged the audience to be self-assured and to uplift those with conditions and disabilities.

“Being an athlete is really what got me back on my feet. I pushed myself to those extreme levels, was uncomfortable, and in difficult spots. Having to go that extra mile really forced me to see this more so as a challenge and trying to use it to my advantage. I think that’s why I made [my prosthetic legs] gold as well, I made them myself,” Wasser said. 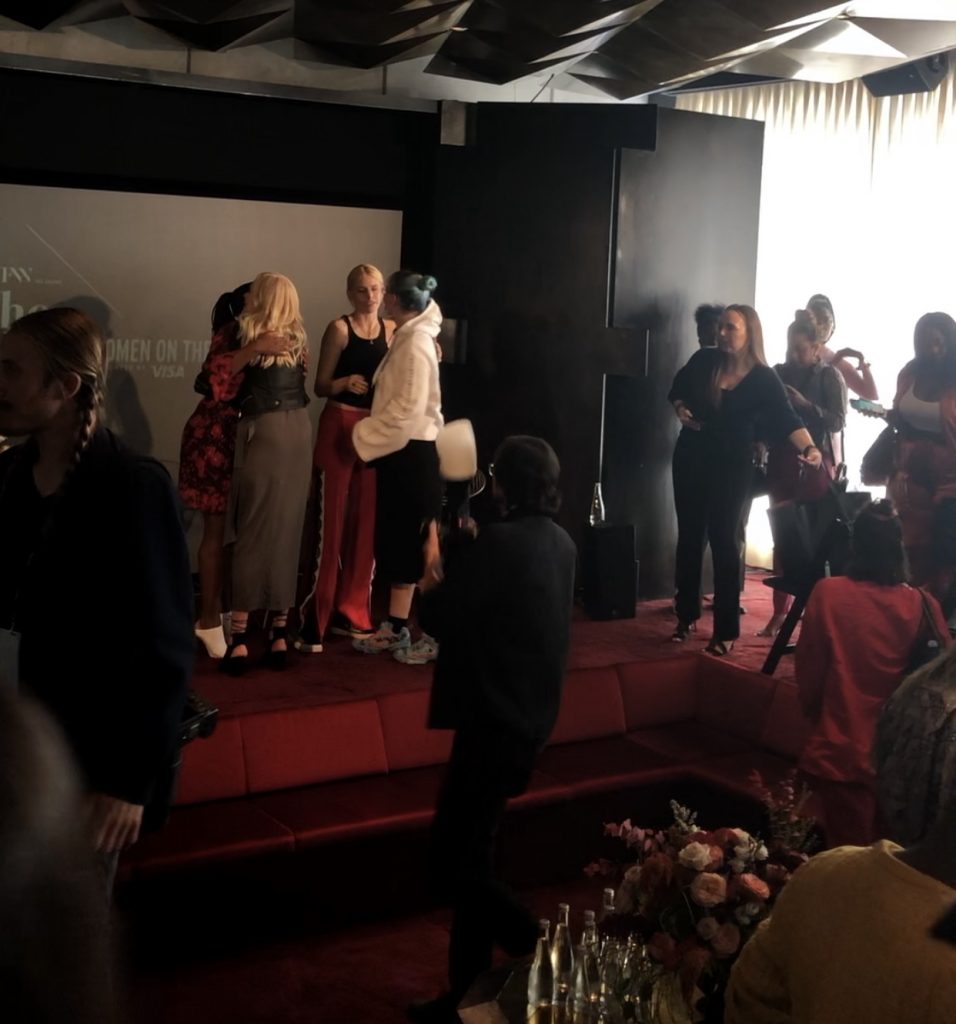 Wasser elaborated on her choice to make her prosthetic legs gold.

“I love A$AP Rocky so I was like, he rocks gold teeth so I’ll rock gold legs. I’ve grown so much and seen what beauty really is. At the end of the day, it’s in your heart, what you exude, and it’s about all of those trials and tribulations that in the end are just pushing you to be uncomfortable so you’ll get to the next level.”

She offered advice to the audience regarding practicing self-love and confidence.

“Just keep pushing yourself, even when you want to give up. You don’t know what you’re capable of and I think you’ll surprise yourself.”

The panelists were also asked what cultural change they wanted to see happen.

Peoples Wagner spoke about her popular August 2018 article for The Cut, “Everywhere and Nowhere: What it’s really like to be black and work in fashion.” She shared with the audience  the changes she wished to see regarding editors of fashion publications and her experience navigating through the industry as a black woman. 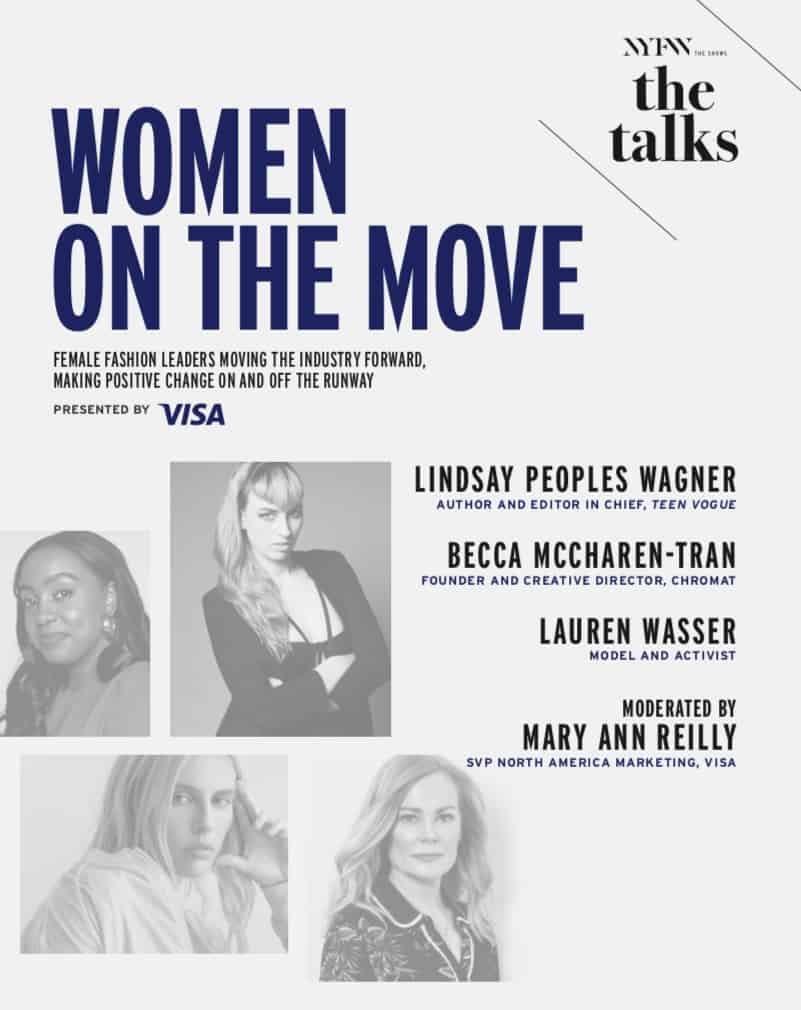 “We say things are changing. I do understand that me even being in the business I’m in does mean there has been a change, but I don’t think things are changing as fast as people say they are. We like to throw that around a lot. There’s been progress, but as Becca [Mccharen-Tran] was saying, there is still a lot of old-school thinking as to who can be cool and chic, who is deserving and worthy,” Peoples Wagner said.

“There is CurvyCon right now, all editors should be at that. It shouldn’t just be people who want to go there. It should be a part of Fashion Week as well,” she continued, “The next step has to be a concerted effort from the whole industry, not just the same people caring about inclusivity.”

Mccharen-Tran added, “I would add women, femmes and non-binary people to the conversation because gender is not a binary.” She then acknowledged how Peoples Wagner and Wasser inspired her.

“Every one of us has gone through our own trials and tribulations, we’ve had a lot and overcome obstacles, but now we’re here and doing so much and hopefully opening the doors for other people.”

Wasser then said, “Lots of conversations [about diversity] are happening. That’s all we can do. We can keep these conversations happening and being where we’re not supposed to be.” 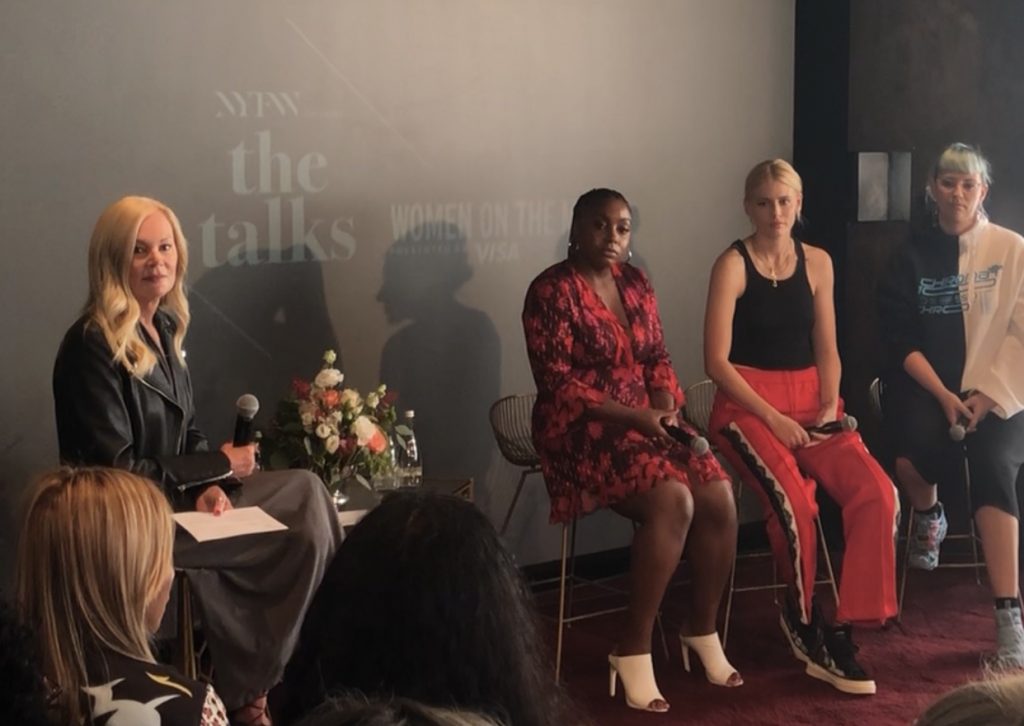 Reilly, the moderator, lastly asked the panelists to give advice to those in the room who wanted to make an impact regarding inclusivity.

“Doing the work is hard. It’s hard to continue to fight against all of these rules in the industry,” Peoples Wagner said, “This industry is so old-school and there are so many things that have to be torn down. You have to be prepared to hustle, to do the work and to not just use a hashtag”

Wasser encouraged social media users to advocate for change with their accounts and to be supportive of others in what they post.

“I think everyone in this room can utilize their platforms, whether it’s Twitter, Facebook or Instagram. If you have something that you’re trying to bring attention to, keep on it, push it and be that voice. You’re not alone. Someone is facing the same or a similar battle you may be facing. Be able to connect with those people and fight it together.” 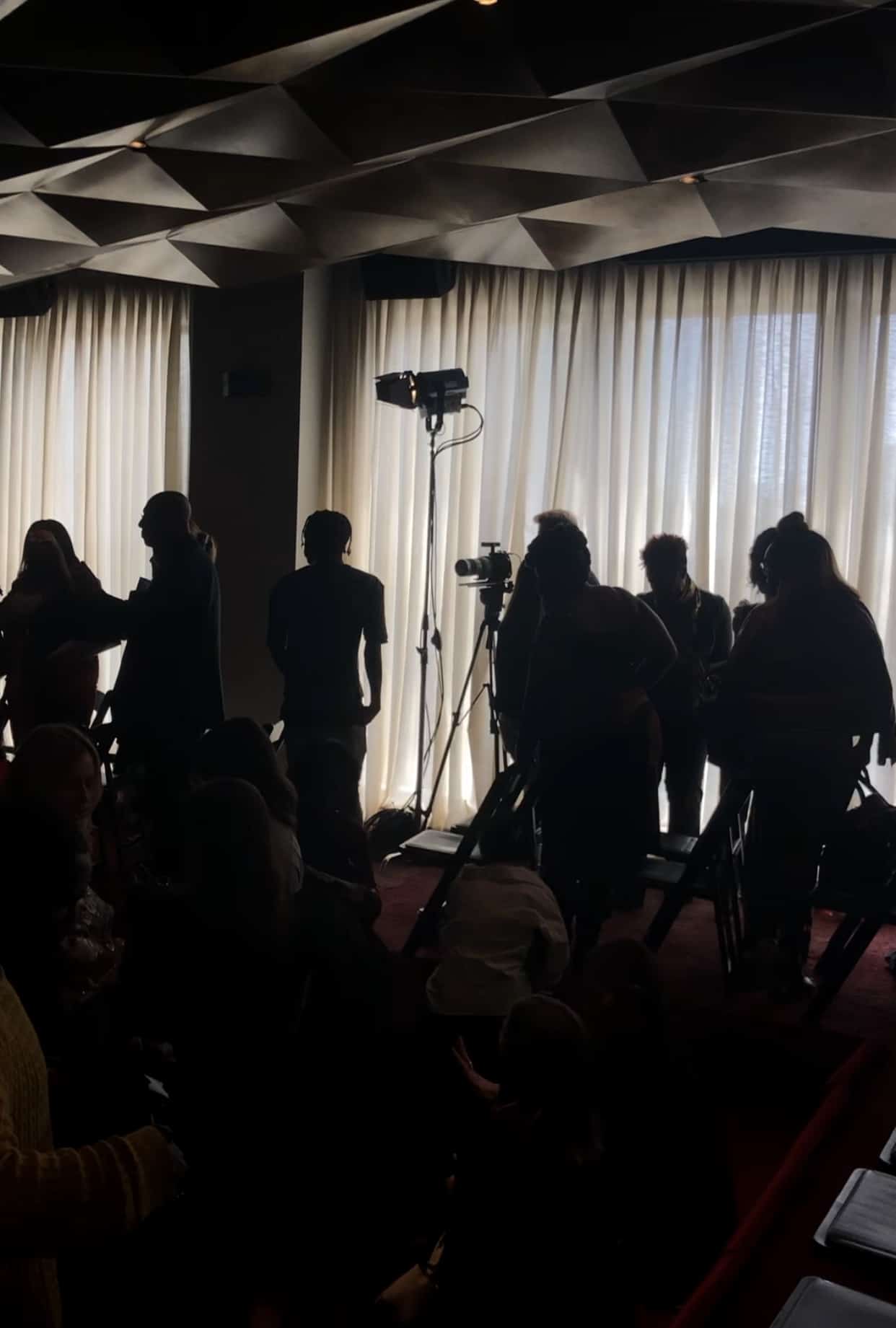 The panelists then welcomed questions from audience members. The questions related to being a minority in the workplace and gaining courage to be vocal about personal experiences.

“For me, it’s just using that seat at the table to actually speak up,” said Peoples Wagner, “I think that we’ve seen a lot of people [of color] get positions, the front row is more diverse, there are more people at shows and in the industry.”

“People are getting more jobs and things are changing but there’s still not enough people speaking up and having these conversations.”

Mccharen-Tran added, “It shouldn’t have to be only black people speaking about institutional racism and white supremacy and how embedded it is in the fashion industry.”

After the panel discussion concluded, attendees were able to walk through an exclusive pop-up with representation from various brands such TreSemme and Nespresso. Peoples Wagner also signed copies of her book, “Becoming a Fashion Designer,” that was written about three experiences of acclaimed designers and the road to success in competitive professions within the fashion industry. 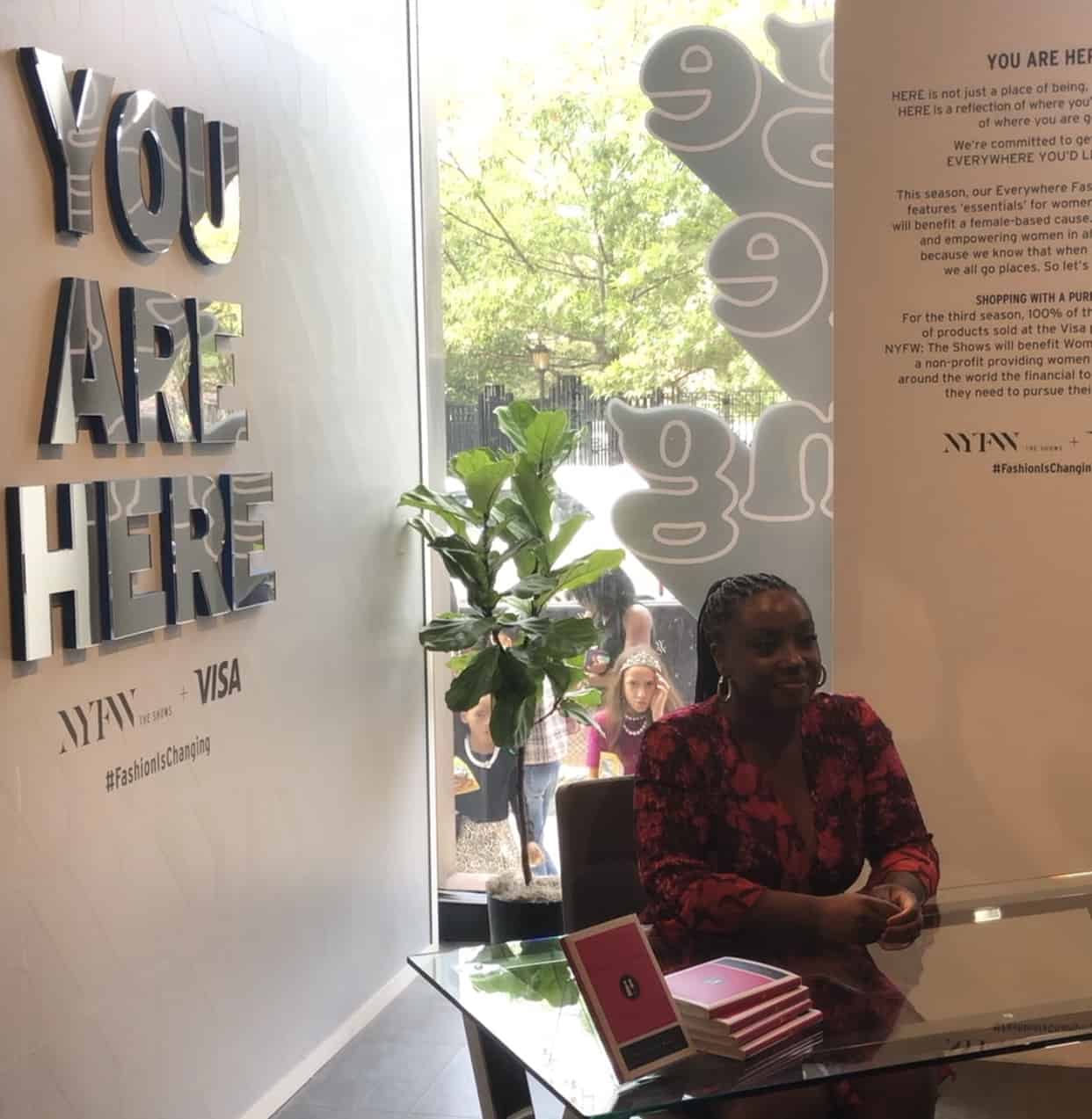 “Women on the Move” provided its audience with real-life examples of diversity within the fashion world. The event ended with overwhelming applause for the women who dedicated their lives and careers to inclusivity and access for fashion lovers from all backgrounds. 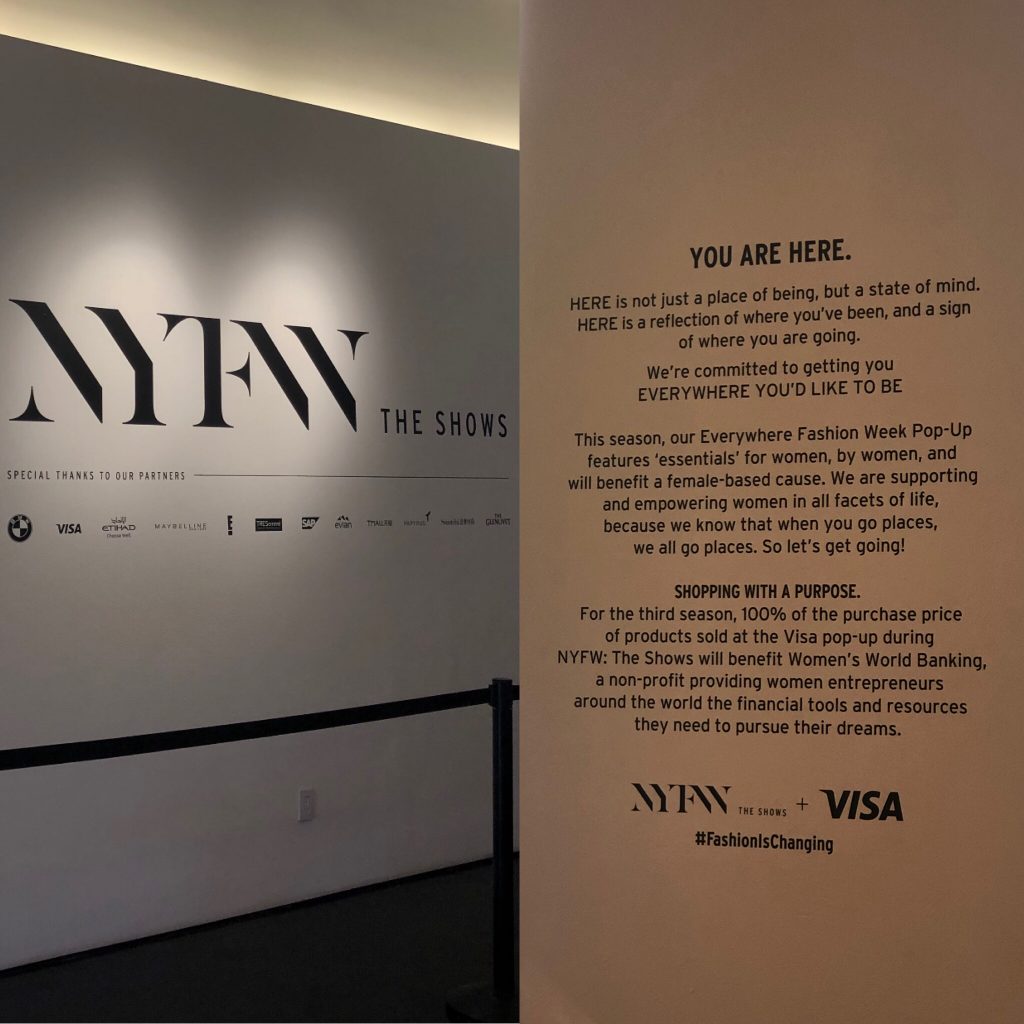 ‘The Game Changers’: A Game-Changing Documentary on the Benefits of Plant-Based Nutrition