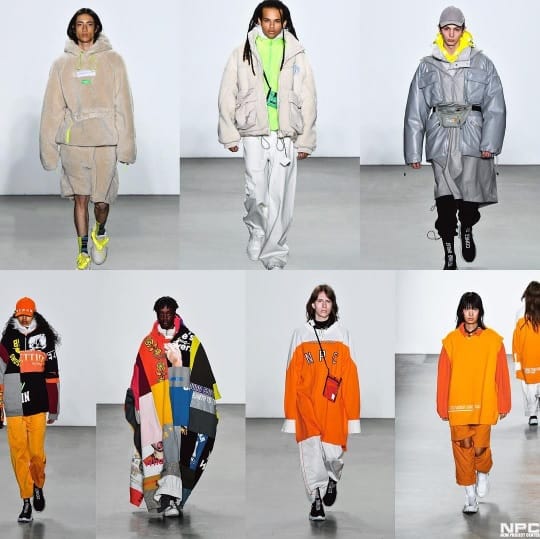 They felt that space exploration provided an ideal metaphor for their journey into entrepreneurship, and aimed to reflect that in their Fall/Winter 2019 collection during New York Fashion Week. The streetwear that made its way down the runway during the show on Wednesday, February 13 was bright and unapologetically eclectic. Prints, jackets, and boots were styled in a way that was distinctly urban and boldly trendsetting. There were a few trends we noticed during the show that gave NPC’s urban style a modern twist.

Who says there are rules for where you have to wear your fanny pack? Not only did the collection bring back the 90s megatrend as an accessory worn in many different ways, but in a wide variety of colors and styles as well. Not only did NPC prove that giving a popular past trend a comeback can be original, but that being unique doesn’t have to mean sacrificing functionality.

One of the standout pieces in the NPC fall/winter 2019 collection was a patchwork hooded poncho that appeared as creative as it looked cozy. Complete with a tassle that adorned a few of the other pieces throughout the collection, the poncho was designed with everything from text, to yellow printed roses. Similar to the oversized sweaters and jackets that made their way down the runway with other styles during the show, its size was all the more showstopping and would surely turn heads on the street.

While space is characterized by the absence of color, neon has always carried a futuristic aspect along with it that tends to be associated with alien lifeforms or intergalactic travel. So, it was no surprise that bring neon colors were out in full force throughout the NPC’s space-inspired collection. At times, the bright hints of green and yellow would be a subtle addition to an otherwise neutral-colored style, and sometimes it was meant to take center stage.

On The Scene: The Fader Presents “Countin’ Up”