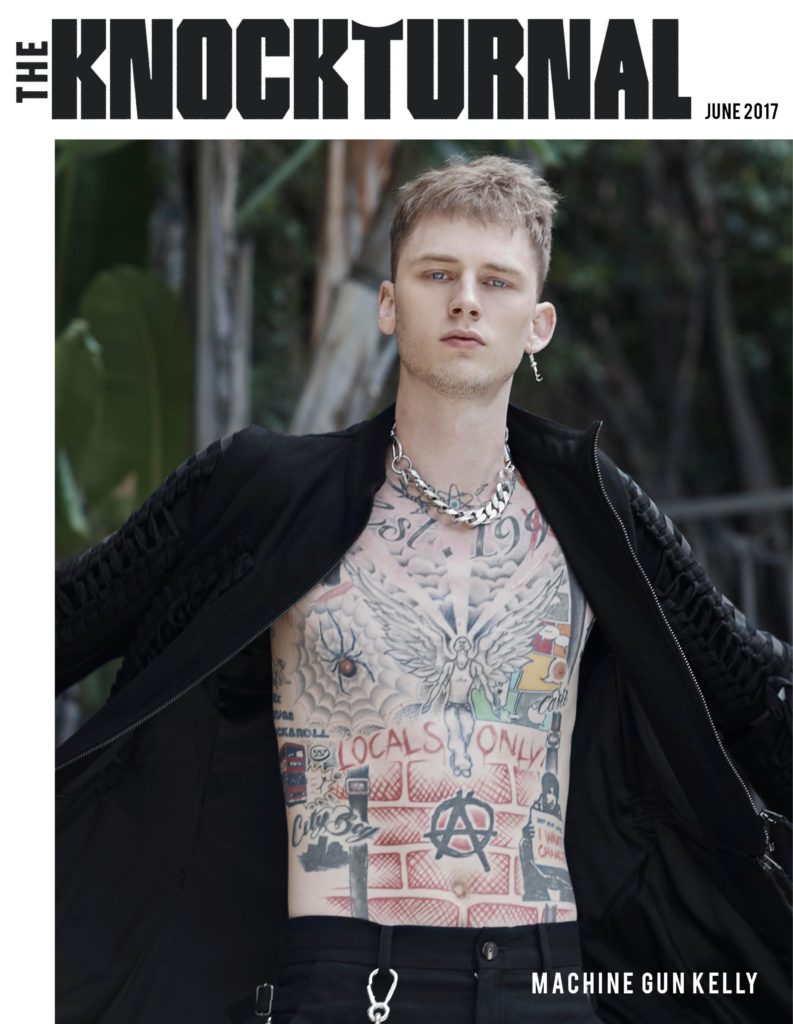 Rain crashed against the foggy top-floored penthouse New York City corner office windows, as sirens roared from below – creating a fitting ambiance and introduction for the rapper and self-proclaimed wild boy, Machine Gun Kelly. In the past years, MGK, born Colson Baker, 27, defied the odds by overcoming a dark adolescence in Cleveland, Ohio with limited guidance. His social media credits some of his influences as, “tattoo pain” and “the girlfriends’ of all the haters I’ve had sex with,” making his warm demeanor and scholarly tongue a bit of a mind fuck. “I’ve definitely been someone who openly speaks out on what his influences are. It’s not just hip-hop, which most people would predict,” said the blond-haired, blue-eyed, fearless rhymer, MGK.

His complex relationship with his parents left him with more than growing pains, as he’s survived depression, addiction, and homelessness – all highlighted on his introductory independent mixtapes. This real-life pain and loner mindset only influenced MGK’s gift for storytelling. Eventually, earning his music an award for the “Best Midwest Artist” at the Underground Music Awards. Soon, the gates opened for the South by Southwest performance that changed his life.  The legendary Sean “P. Diddy” Combs became further intrigued by MGK’s sound, they had met prior, but no business was discussed. Following MGK’s energetic performance, Sean Combs signed him to Bad Boy Records, and the rest has been splashed across headlines ever since.

His newly released third album Bloom is a vulnerable genre-fusion of music – presenting an openness from an emcee known to have the balls the size of Tommy Lee’s. The album’s lusty lead single, “Bad Things,” featuring Camila Cabello, is his biggest hit to date. The millennial Romeo & Juliet plotted music video is climbing towards two hundred million views on YouTube. Validating this year as the most successful in MGK’s career, overall. And the lyricist is drawing upon some unexpected inspiration.

“The alternative scene that was going on in the nineties, and the pop punk scene that was going on in the early two-thousands. So I think ‘Let You Go’ and ’27’ are a huge sum up of the music I was in love with when I was a kid, and I kinda wanted to bring that back for my generation,” enlightened MGK. And he does! Whether he’s rapping upside down over his concert-goers, from a sky-scraping height, or shredding his guitar, before long jumping into his fans’ mosh pit – MGK brings the rage. 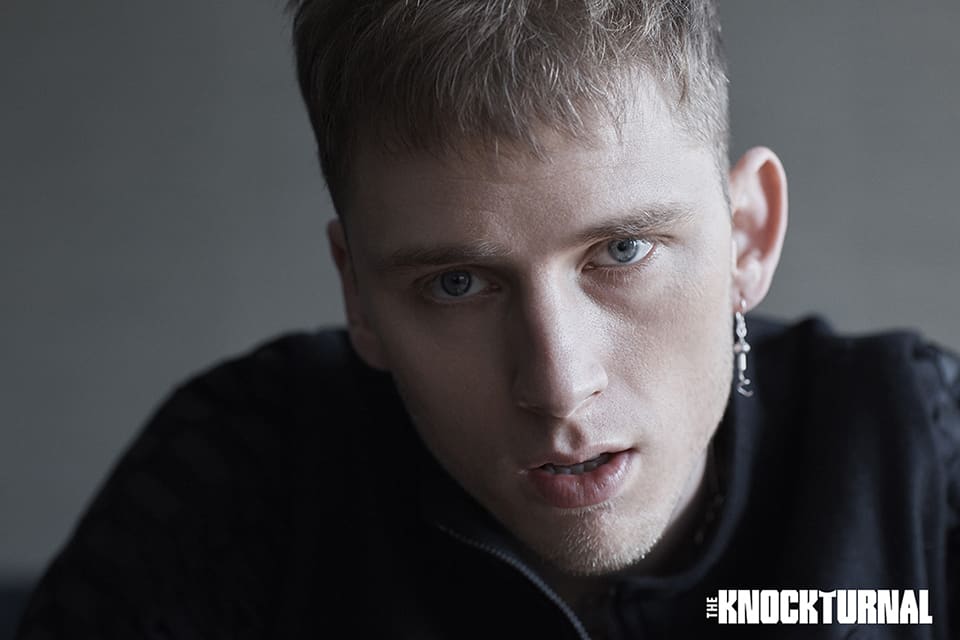 Sean Combs signed him to Bad Boy Records, and the rest has been splashed across headlines ever since.

Currently touring, a daring display of ink is spotlighted nightly. His immense 6’4 physique is etched in a mosaic of hundreds of tattoos comparable to the rock gods of the past. A cult-like following indulges alongside MGK on his “Alpha Omega Tour,” for drug-infused lyrics containing trippy mushroom depictions. But with time comes growth. He’s been honest with his fans about the obstacles of substance abuse, run-ins with the law, and even escaping the clutches of death numerous times. However, his transition into manhood is arguably his greatest rap illustration yet.

Heartfelt song “At My Best,” featuring pop star, Hailee Steinfeld, serves a powerful upbeat chorus as pain medicine for MGK listeners battling adversity. This record of self-discovery is one of many on Bloom, featuring the sincerity of enriched life experiences. Still, when he took his artistry a step further, by singing about a letdown relationship on the guitar-heavy rap-ballad, “Let You Go,” some listeners were caught off-guard. 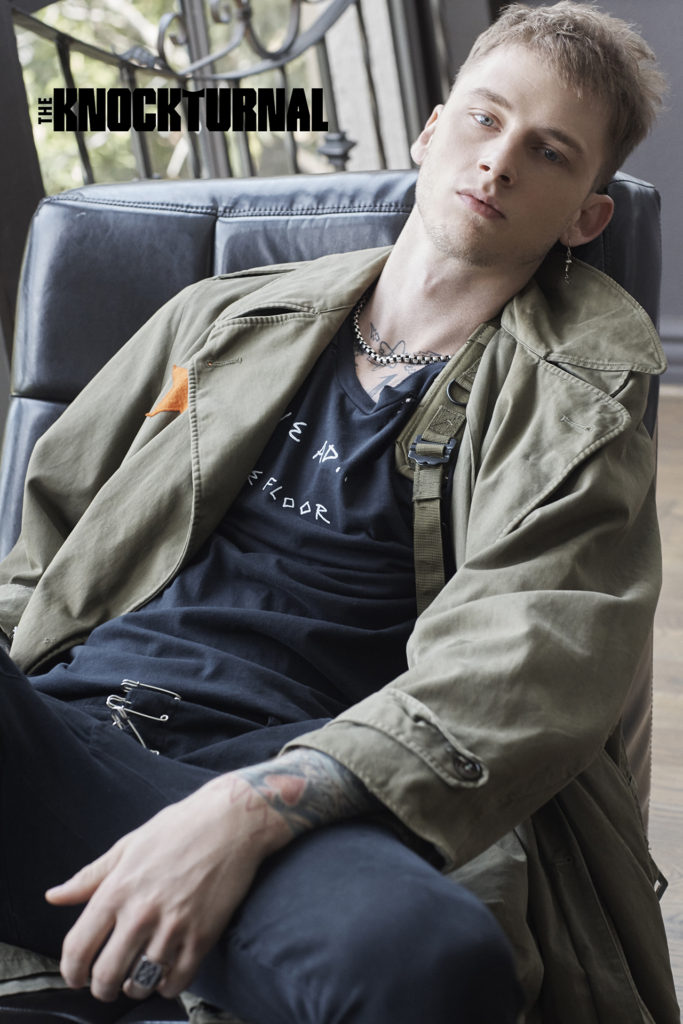 “Ya’ll know I changed rap. Live shows I changed that – mosh pit since way back. My guitar I played that.”

“My passion for the guitar came back when we started seeing a lot of people not just copying things we were doing, but blatantly exploiting them,” he explained. “[Artists were] taking things we had done in the live shows and brought them to a bigger audience as if it was theirs. We just had to keep upping the ante,” MGK accepted.

While most performers might have charged it to the game, the OG mosh pit king broadened his musicianship by learning to read music and play with his band. “What we were known for was big shocking moments [in concert]. I didn’t want to be known as a circus act. I wanted to be known as a musical act. It was important to establish that next step – me picking up a guitar,” he acknowledged. This cemented his legacy as a boundless performer.

If anyone forgot that he could spit, he reminded them on a hip-hop pit stop to L.A. renowned Power106. MGK damaged airwaves with a savage-like freestyle that jogged the public’s memory. “Ya’ll know I changed rap. Live shows I changed that – mosh pit since way back. My guitar I played that. Ya’ll witnessing a rock star – kissing on a pop star,” he continued to pop off at the station, in classic Machine Gun fashion. The Bad Boy emcee finessed his freestyle seamlessly for the LA Leakers, warning everyone to not get shit twisted – he could snatch your chick, and wax opposing rappers with lyrics. Still, he wasn’t content dropping the mic – there was news to break of his return to the big screen. His first film, Beyond the Lights, highlighted the pressures of stardom, and his supporting film roles to follow polished his acting chops.

Captive State is a sci-fi thriller slated to release the fall of 2018. MGK, unable to reveal much, cautiously advised his character is a “young, bad influence on the protagonist in the movie.” Alongside distinguished actor John Goodman, he has been pulling his own stunts and endured a devastating sternum injury. The damage was a testament to his commitment to his fans. Footage has since gone viral of him gripping his chest in severe pain during his latest performances. “When you’re a rock star, you don’t manage,” said MGK confidently. Pausing for nothing, he continues on, in the name of art and frenzy. 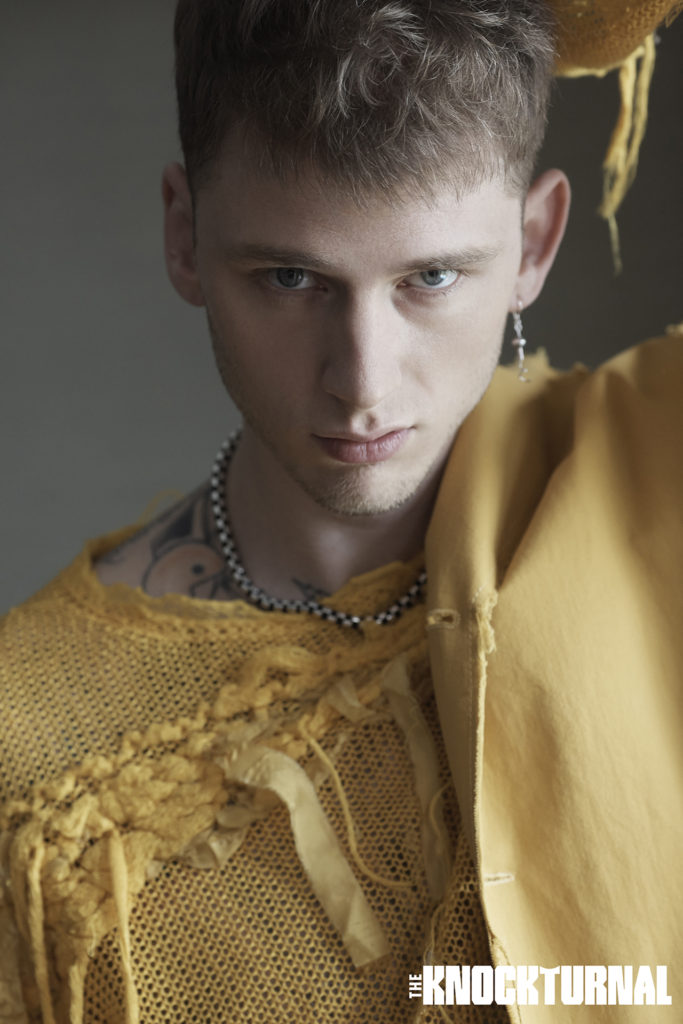 Stimulated by the narration of his upcoming film announcement, MGK looks forward to fans seeing his first satirical music video. “The ‘Let You Go’ video is a period piece, which takes place in the fifties. Me and all my guys dress up almost like Buddy Holly and his band, and it just really has this Beatlemania-type vibe going on. The girls are losing their minds and fainting. They’re dressed in these beautiful fifties skirts and outfits. This one’s completely making fun of ourselves and us just being goofy,” said a now glowing MGK. Although he is enthralled for the release, he acknowledged some potential interference with his vision.

“I don’t think that social media allows people to purely love the music anymore,” he continued. “You have expectations. You’re reading what other people are saying, and how other people feel about stuff. When you expect more than the music, you set yourself up for disappointment,” MGK clarified. In hopes fans will fall in love with Bloom, he presented a memo through song. “My message to my fans is the song ’27.’ Keep the vibe alive forever,” said MGK. 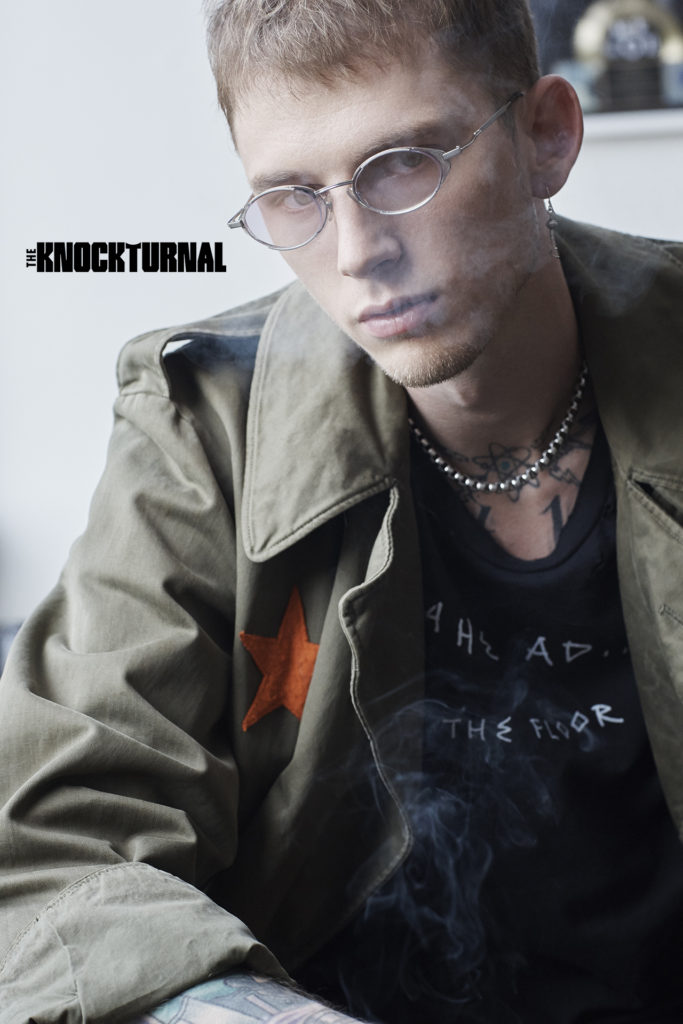 “She’s the epitome of everything.”

Even so, his ultimate creation appeared to countless fans for the first time on the orange carpet of the Kids’ Choice Awards. Sporting a cute ponytail, fierce powder pink boots, and a massive smile for her daddy – Casie Baker stole the show. The youngster exuded a personality as colorful as her father’s, prior to his live performance.

MGK’s voice bursted with affection as he admitted, “It’s the biggest honor I’ve had in my life! Even being able to drop her off at school this morning before the airport. I forgot my bag in the car and she ran it to me,” he appreciated. “It’s weird how receiving an award doesn’t mean as much as her retrieving a backpack. My kid remembered I had important stuff in there. That is the coolest trophy. She’s the epitome of everything,” said MGK. The famous badass is head-over-heels in love. Fatherhood looks good on him and is his priority, above all. Their bond drives MGK’s motivation. His daughter is the muse behind his broken personal chains and mainstream development.

These undertakings include the announcement of his upcoming tour with his (internationally acclaimed) childhood heroes – Linkin Park. The “One More Light” tour will kick off in the UK and make its way back to the States. “There’s nothing better than seeing us when we’re in a happy state. Especially like the day one [fans], who’ve been with us when we clearly were not in a good space. We’ve been through blank periods where nothing’s come out for years,” recalls MGK.

His second album General Admission wasn’t as celebrated as his first, Lace Up. Hip-hop heads remembered yelling, “Yeah, Bitch! Call Me Steve-O,” on his breakthrough single, “Wild Boy.” With this tour momentum, MGK emphasizes, “Fans can feel when the energy’s up – like it was when we first came out. It’s just a really cool bridging of the gap.” These approaching concerts beside Linkin Park represent the perfect storm for band fans past and present. Their collision of vibes will undoubtedly change MGK’s poetic passage forever.

As the accolades mount, it is clear he is more than an entertainer, but rather, a natural born leader. In tune with his purpose, a man once troubled with orphan-like baggage, grew to be a tremendous father and star. Visionaries don’t get blueprints, and Machine Gun Kelly continues to thrive against all odds. The actor-rapper-guitarist lives up to his self-appointed name as the “voice for the voiceless.” Honing on fresh successes, he hasn’t taken a moment to rest. Bloom exemplified how he has blossomed in his craft. He has no doubts he will flourish in his endeavors to come, and asserts, “I’m a bad mother fucker!”

On The Scene: KIMOA Celebrates Its U.S. Launch

24K Goldn and Geojam team up to celebrate...

Premiere of the BE GOOD Torch Song Music...