Florian Zeller’s “The Father” starring Anthony Hopkins and Olivia Colman will premiere this week just before the Golden Globes.

Based on Zeller’s play of the same name, The Father examines the relationship between Anthony (Anthony Hopkins) and his daughter Anne (Olivia Colman) as Anthony ages and becomes increasingly confused due to dementia. With Anthony unwilling to admit that he needs assistance, Anne faces tough decisions regarding how to best care for him. She’s already reached the conclusion that she cannot take on the task alone.

Undoubtedly, the most notable aspect of The Father is Hopkins’ and Colman’s performances within this father-daughter relationship. Hopkins particularly could not be more perfect for the role. He presents an ailing man who hides his confusion with charm, manipulation, and sometimes aggression. Yet he also maintains a tinge of paranoia rooted in Anthony’s fear of his unstable surroundings and of losing his independence. Colman matches Anthony’s overwhelming personality with a quiet demeanor. She always tries to muster up a smile for her father no matter how painful the circumstance. It’s clear that Anne is caught between caring for her beloved father and living her own life. It’s even clearer that Anthony does not recognize the toll he is taking on his daughter. 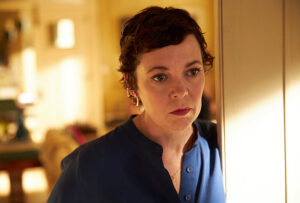 Hopkins and Colman’s performances are well-deserved in receiving critical attention, however, that is not the only noteworthy aspect of the film.  Specifically, The Father‘s set design and locations add to the theme of dementia. There are few locations, the majority of the movie takes place in a flat, and they are almost all interiors. These locations lend themselves to a feeling of enclosure, which adds to the pressure put on Anthony and Anne’s relationship. It also makes Anthony seem even more closed in as he loses his grip on reality. 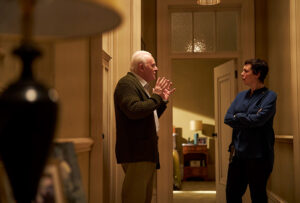 The Father is a character-driven drama similar to Marriage Story (2019) and Pieces of a Woman (2020). It too dives into a somewhat common reality (elderly parents, divorce, and the loss of a child, respectively) and examines how a relationship evolves under that pressure. What makes The Father unique is that it taps into a parent-child relationship, which is not often highlighted in movies, yet is so universal. In this case, the relationship was never expected to be equal. Anthony has always been the father, but with his health in decline, Anne must gain authority.

What’s most engrossing about The Father is how the story meanders through the walls of the flat just as Anthony does. It’s genius how as Anthony attempts to regain control of his ailing mental sanity, the audience too loses control of the plot. What’s reality and what’s imaginary is constantly put into question. While this method of storytelling will sustain your interest throughout the film, it’s also worth noting that the movie is an extreme bummer. It never gets easy to watch Anthony try to navigate his confusion or to see Anne tiptoe around his illness. There’s rarely a moment of relief and as time goes on, he only gets older, and less lucid. The movie painfully examines Anne and Anthony’s strained relationship. It does not resolve it.

NYFW:Rebecca Minkoff Continues To Amaze With Her SS21 Collection