Italy’s official entry to the Oscars for Best International Film is the documentary Notturno from award-winning director Gianfranco Rosi. Over three years, Rosi traveled through Iraq, Kurdistan, Syria, and Lebanon and captured vignettes of the citizens within those countries.

Rosi directed, filmed, and recorded sound for Notturno. His process involved first building relationships and trust with his subjects to gain access to their most intimate spaces.

In an early scene, women whimper throughout an abandoned prison where their sons were imprisoned, tortured and killed. The mother’s communal suffering is so personal and specific that the presence of the camera almost feels intrusive. Yet, Rosi’s excellently composed shots, a staple throughout the film, eases an impression of the invasion of privacy. While some documentaries favor lower-quality, jerky footage to express the story’s “realness”, Rosi’s footage is highly cinematic. The details of the scenes are rich and the camera is solitary. Often, one has to remind themselves that they are watching the lives of real people and not an auteur film. 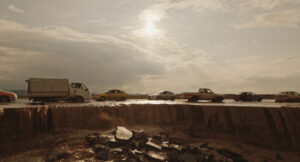 In addition to his cinematic style, Notturno’s editing is also noteworthy. Edited by Jacopo Quadri, the film opens with text describing the tumultuous history of Iraq, Kurdistan, Syria, and Lebanon. Subsequently, Notturno moves from scene to scene, from day to night, occasionally returning to a subject, but otherwise presenting stories that never fully play out. Oftentimes it is even unclear what region the footage is from.

From a foreign and western perspective, the lack of context is initially frustrating. There are no cold hard facts to inform the scenes. There is no clear message to stand behind. Instead, the viewer blindly follows the emotions of the subjects. The documentary then shifts from frustrating to immersive.

If Notturno offers any contextualization, it’s from scenes shot at a psychiatric hospital where patients rehearse a play about their homeland, its history, and the trauma brought upon its citizens. Through their lines, the patients repeat their frustrations with corruption, racism, terrorism, and a government that places foreign interests over the lives of its own people. These themes echo over the scenes of the other subjects.

Rosi’s Notturno excellently balances artistry and realism. Although a documentary, the film is poetic in how it weaves through scenes of various landscapes, peoples, and traumas to provide an intimate portrait of the experiences of the citizens of Iraq, Kurdistan, Syria, and Lebanon. His mastery is no surprise as the director is highly regarded for his previous films such as El Sicario – Room 164, Sacro Gra, and Fire at Sea. With three months until the Oscars ceremony, it will be interesting to see how Rosi’s documentary will stack up to other potential nominees.

Notturno is available through virtual cinema and will be released On Demand and Hulu on January 29th.