There’s a new Disney Princess coming to the screen and this time she’ll be voiced by Kelly Marie Tran!

Known for playing Rose Tico in the Star Wars sequels and most recently for voicing Dawn Betterman in The Croods 2, Tran will now play Raya in the upcoming Raya and the Last Dragon.

Raya and The Last Dragon takes place in the fictional world of Kumandra comprised of five regions: Fang, Spine, Heart, Talon, and Tail. Over 500 years ago the people of Kumandra lived peacefully with dragons. Then the evil Druun came along and turned everyone in their wake to stone. The dragon Sisu created a gem to defeat the Druun and return all Kumandrans back to life. However, the dragons remained turned to stone. When we meet Raya in the present day, the regions of Kumandra are fighting over possession of the Dragon Gem. The Druun returns and Raya must find Sisu, the last dragon, to fight the Druun and save the world.

Raya is the first Southeast Asian Disney Princess. Although Kumandra is a fictional world, it is highly influenced by Southeast Asian cultures from the clothing and architecture, to the food and cultural practices presented in the film. Sisu is even inspired by the Naga, a legendary creature originating from Southeast Asia. However, Sisu is not exactly the noble dragon Raya expected. Voiced by Awkwafina, Sisu is awkward, clumsy, and at times naïve. She is starkly different from Raya, a determined warrior who is reluctant to trust others. Nevertheless, the two embark on a journey to recover the Dragon Gem and defeat the Druun. 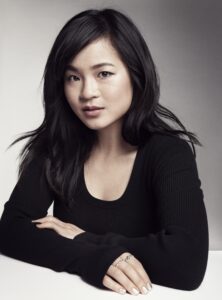 The Knockturnal asked Kelly Marie Tran about creating the relationship between Raya and Sisu as well as how she connected to the role of Raya.

I wanted to know about building the relationship between Raya and Sisu. What was that process like, especially having a more serious character and playing off of Awkwafina’s awkward, funny dragon?

Kelly Marie Tran: Yeah it’s kind of crazy because Awkwafina and I have been doing press together for Raya so now we get to interact a little bit but while we were recording and working on this movie we really didn’t interact at all. So, I feel like a lot of the work of sort of developing that relationship came from the writers and the directors and editors of sort of like working with us individually to find these characters and then figure out how they fit together. I think it’s a really cool relationship of someone like Raya who is trying to figure out how to trust people in the world again and someone like Sisu who is trying to, you know, who is almost, like, too trustworthy. So yeah, wildly it’s been just a really fun ride and I’m really excited to share with the world their relationship.

Kelly Marie Tran: Wow. That’s a good question. Um, did I learn something from her? Yeah, Yeah. She is so unafraid to stand up for herself and what she believes in and to sort of give up everything in order to fight for this sort of beautiful vision of what she believes the world could be. Actually, you know what’s funny, because I don’t actually think that she believes the world could be good in the beginning of the movie. By the end I think she does. But I think that sort of fight that she has throughout the whole movie and despite something scary and dangerous, she still puts herself out there and that’s something I’m trying to learn all the time. It’s definitely something I’m learning from her. Something that I think she could’ve learned from me? It’s so hard. I don’t know. Oh, actually, I do know. I, you know, one of the best things about my life is that––it sounds so weird to say “one of the best things about my life”––is that I have really supportive friends. And I went through, you know, they were my friends before I became a working actor, they’re still my friends and I think that Raya in the beginning of the movie doesn’t really have many friends. She’s sort of a lone ranger. And, if there is anything that I could teach her it might be that, you know, not everyone you meet is going to be a dangerous enemy or a competitor. And, maybe, rejecting the way that the world tells us that we need to compete with other women. I think that that’s a good lesson to learn. Something that I, you know, I cherish making long friendships so much and I think it’s going to be really cool for people to see the way that Raya learns how to trust people again.

Raya and the Last Dragon comes to theaters and Disney+ with Premier Access on March 5.