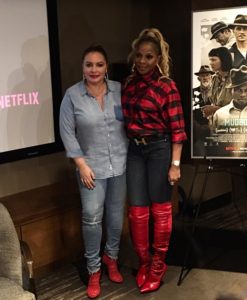 Angie Martinez: I was watching it because I know you. I know the things that were going on in your life while shooting this [film]. What kind of headspace were you in, to get there, to be her?

Mary J. Blige: Well, I was already miserable. I was already suffering, and I was already [stuck with] all this heaviest. There was an unsurety, and not knowing what was going on. I did not know what was going to happen in my life. I knew that I was hurting really bad, though. Something had to give. I gave all my heaviness, [and the] insecurities [to my character]. You know?

I was mad insecure after so many years of being beaten down, mentally. So, I just gave everything to Florence. Then when Dee [Rees] said, “No wigs. No eyelashes.” You know, [not wearing] the nails, whatever, whatever. But, I was like, “Damn! Was she born with lashes? [Laughs.] Can I do a strip of lashes? Can I do a wavy wig instead of my texture of hair?”

You know, I’ve been fighting with that. That’s why I’ve been rocking wigs for years. You know I was scared to show my forehead off. You know the hair of my texture to me was wack.

And, Dee Rees, the director, who is amazing, she stood her ground and said, “No! This is going to make Florence beautiful. Because the women back then, they didn’t care about any of this. My grandmother was this woman, my aunts were [this woman]. So, I saw this woman [before].

She did not have a strip of makeup on. It was just [that] she knew who she was. So, Dee helped with the transformation. And, I just gave her [all I had]. Of course, Tasha Smith was my acting coach. She is amazing.

You know? I’d run over to Tasha’s house crying, and going through it. And Tasha would say, “Okay! Stop right there. I need you to give all this shit to Florence.” [She’d say] those exact words, “Just give all your shit to Florence.”  And I did exactly that. I just let Florence live. 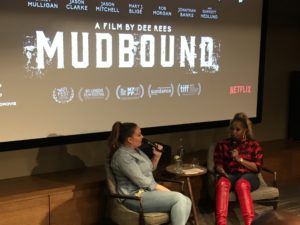 Mary J. Blige: Yeah, yeah! As an actress, I feel like I don’t want to do it any other way. We watched like Meryl Streep, Viola Davis, and Angela Bassett they make us feel something. I want people to feel something when they watch me act.

Angie Martinez: When you watch it back for the first time, what does that feel like? Do you recognize her? Is it like, “That’s me,” or does she look like someone else to you.

Mary J. Blige: Well, when I went to see it at Sundance [Film Festival] for the first time, I cried when I saw my character. ‘Cause, you know, I hadn’t seen the movie.

Angie Martinez: So you didn’t watch the trailers? You [had to] see trailers.

Angie Martinez: So, what has it been like now? The reception has been really good, right? And, Mary is on the cover of the Hollywood Reporter… which, I almost cried when I saw it.

Mary J. Blige: Thank you, I feel so good, Angie. You know how we talked earlier [about this]. You know, we work hard. No one gives us anything.

We don’t complain. We just go hard. It just feels good to know that I’ve earned everything and people are recognizing me as an actress.

Angie Martinez: That is a beautiful thing.

Mary J. Blige: I am just so grateful and humbled by the whole thing, seriously.

Mary J. Blige: Of course, [I’m going to do more acting]. People are knocking on my door. Yeah!

Angie Martinez: Light stuff? Are you going to keep doing heavy stuff? This [film] was tough to watch.

Mary J. Blige: Like, I said, yes. It probably won’t all be this tough. But, I’m not ready to be a comedian yet.

Mary J. Blige:  I don’t have anything to draw from. Maybe later. Maybe. [Laughs.]

Angie Martinez: So, it comes out tonight. Is that exciting for you? By the way, [the audience] I was right about what I said earlier [tonight]. Midnight it comes out on Netflix. Right?

That’s tonight! I like being right, by the way. [Laughs.] The audience was trying to say, “It’s tomorrow!” It is tomorrow, technically. But at midnight it comes out. Is this exciting? Are you nervous?

Mary J. Blige: I’m excited. I am nervous. I am everything.

Angie Martinez: Yeah, because you are so vulnerable. What do you want people to get from not only your role but this project?

This is not a game. We all need to learn, that it’s hard [for everyone]. We need to learn how to pray for our enemy. You know?

We are in this together, and it is hard. Like, I am really learning how to pray for my enemy right now. You know what I am talking about, Angie.

Angie Martinez: I do!

Mary J. Blige: But this is the only way it is going to go away. You know? So, if we keep talking about it, or throwing tomatoes at it, it is just going to keep existing. We are going to keep being mad.

Then [the things they did] are going to keep being ugly, ugly, ugly! So, let’s just fight together. That is what I hope people walk away with. We all belong.

Angie Martinez: You’re amazing. We are so proud of you. The movie is great. Congratulations! The film is on Netflix.