A thrill ride that is also truly important for the time we’re living in, ‘David Byrne’s American Utopia’ speaks to the mood of 2020.

I was lucky enough to see American Utopia during its Broadway run, back in December of 2019. As a life-long fan of the Talking Heads (thanks, Mom!) and a lover of curious stage shows, I was hooked. I’ve had the soundtrack on repeat in the months since. And something remarkable has happened in 2020. The soundtrack has become an escape. As the world has gotten stranger and more disastrous, as COVID has ravaged the country and protests have continued, I kept coming back to the sounds of American Utopia. And now, with Spike Lee’s directorial efforts, I can watch David Byrne’s American Utopia every time I feel even a little unhappy. That’s the magic of American Utopia, as vital as ever at the 58th New York Film Festival. 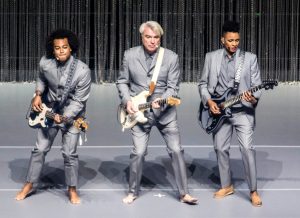 Byrne, the lead singer of The Talking Heads and an Oscar and Grammy winner, is now 68 years old yet has made a show that feels vital still. A multicultural and international assortment of performers makes up the band that accompanies Byrne. Their talents are just as incredible. Byrne directed and choreographed the Broadway show along with Annie B-Parsons. The team brings life to some of his greatest hits and newer songs everyone will enjoy.

The setlist for American Utopia blends the music people love from The Talking Heads with newer songs that Byrne wrote in the past few years, even including a cover of a Janelle Monae single. This blend of musical talents makes for a thoroughly wonderful time. Lee stages in such a way that you cannot help but dance along in your seat. Director Spike Lee puts his usual visual style to the film, which owes a lot to the works of Jonathan Demme, the late collaborator of Byrne’s who also directed Stop Making Sense. But Lee also brings his own sensibilities that feel more like a film of 2020 then anyone else could make. 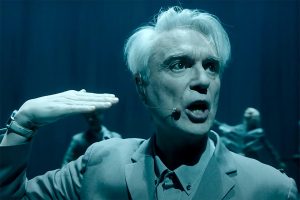 To put context into my own experience with American Utopia even further, I found myself watching the film on the night of Ruth Bader Ginsburg’s death. Hearing a man sing a song about finding a community in a shattered world feels more important than ever. Seeing an audience uniting in their enjoyment adds to that love. But the concept of a utopia means something new in 2020, more than it did in 2019. Lines like “home is where I want to be/but I guess I’m already there” and “I remove my mask when I am done” hit differently now when we’re trapped at home and wearing masks otherwise. Similarly, there are references to remind the world that there are ideas “beyond war and nationalism” that are worth remembering.

When a song about police brutality occurs around the halfway mark of the film, Spike Lee gives it format-breaking attention. It includes a moment that made me burst into tears in my own living room. Not long prior, Byrne discusses the need for young people to vote. The hairs on the back of my neck stood on end. Hell, Byrne even sings “Put away that gun/this part is simple.” You can’t ignore the relevancies if you tried.

I can’t guarantee that American Utopia is for everyone. I am certainly in a special group for having a lot more experience with the music and the show. But there is something so sincere and effective about seeing a group of people in well-fitting grey suits dance on a barren stage and call it a utopia. Right now as the world seems more chaotic than ever, it is all the escape I need.