Check out our exclusive interview with Renée Élise Goldsberry from the hit Broadway musical, “Hamilton”, coming to Disney+ July 3! 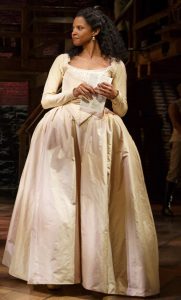 To anybody who knows a thing or two about the Broadway scene, Lin Manuel Miranda’s Hamilton is no hidden gem. Following its 2015 opening, the show became an almost instant hit. Nominated for a record-breaking 16 Tony awards and winning 11 of them, the show has gone on to become one of the most popular and adored Broadway shows of all time. Renée Élise Goldsberry is known for many iconic broadway roles, one incredible one being her originating of Angelica Schuyler in Hamilton, her breathtaking performance earning her the 2016 Tony Award for Best Featured Actress in a Musical. I had the pleasure of speaking to Renée about her experience working on Hamilton, and the upcoming Hamilton movie starring her and the rest of the original Broadway cast, coming to Disney+ on July 3rd. Here is our exclusive interview.

The Knockturnal: So it is definitely needless to say that Hamilton is one of the most iconic musicals on broadway, you guys are the newest member of Broadway’s one billion club, you guys have millions of adoring fans worldwide. Your version of satisfied plays in my house almost every single day, so we’re no stranger to how amazing you and the rest of the original Broadway cast are and I’m sure that most people aren’t either. Now you originated the role of Angelica Schuluer, how does it feel to see this show that you worked on from the beginning, and before it even came to broadway, become something so big that so many people love?

Renée Élise Goldsberry: Breathtaking. It literally took my breath away. I laughed, I cheered, I wept, and I was so humbled, and so, you know, I never forgot how beautiful the show was, how brilliant the creators were, how talented and brave my fellow actors were, I never forgot that. But I got to rediscover it when I saw it on film.

The Knockturnal: That’s amazing. Now, this was a project that you were apart of from the very beginning, you played Angelica off-broadway at the Public theater in 2015, what was it like back then before you knew the impact it would have? how was the process different off-broadway then it was on Broadway?

The Knockturnal: That’s an amazing analogy, I love that.

Renée Élise Goldsberry: So it definitely changed to different levels while trying to figure out how to honor it, how to stay with it, how to further it, how to support that family, and how to live on the platform responsibly that it afforded us. It’s a continually changing relationship but it never stops giving to us all.

The Knockturnal: After your opening in August in 2015, you guys started to rapidly gain popularity, and you were no stranger to iconic shows at that point, you did “Rent”, “The Color Purple”, “The Lion King”, but with “Hamilton”, how did it feel to all of the sudden have so many people loving this show that you guys were doing? Did it change your process, did it change the way you performed every night?

Renée Élise Goldsberry: There’s definitely a great pressure to live up to whatever group of people got that ticket. There was never- I felt that way always, I mean I never take for granted that anybody showed up to watch me sing or act or do anything. I’m always grateful for anybody who wants to show up and see a show, I always feel like those people are my people, but you can start to rest a little bit in other shows, and for whatever reason, in Hamilton, it always felt like holding up an Olympic torch. So we really kind of leaned on each other to keep going and to encourage each other. It’s a beautiful thing to be able to originate one of these roles. You know, I’m not the original Mimi, that’s Dafne, Dafne will always hold that crown, I could never take it from her if I tried, you know. But you know, these great roles can be inhabited by so many different people and become new again in beautiful and brand new ways. To be the first, I knew was something that I’m going to hold alone for a very short time. Now so many women have played her and will continue to play her, and now it’ll be playing in everyone’s living room, so our family, the family of Angelica lovers, will grow.

The Knockturnal: So on July 3rd the entire original cast of Hamilton is coming to Disney plus, and this is a recording of 3 separate performances from June 2016, so these performances are going to be kept alive for generations now, and so many people are going to get to see you guys perform for the first time. And this is a show that means so much to so many people, a lot of which haven’t even gotten the chance to see it yet, so this will undoubtedly be an incredible experience for so many. What do you hope that the viewers will take away most from that experience of getting to see you guys for the first time, and maybe other times?

Renée Élise Goldsberry: I hope that they will remember how beautiful it is to be together. When we can come together and sit next to each other as strangers and friends and watch a group of people tell stories on a stage, and we miss that right now. But that’s one of the best things about being human, being able to congregate that way and to celebrate and cry and laugh together in that way. So I hope that they feel that, and even stronger than we’ve, we’ve kind of upheld it virtually, I hope that they remember how beautiful the theater is. And I hope that everybody, when they’re looking at how this country was founded while were asking questions about hey some people are still oppressed, why some things still need to change, why we haven’t figured everything out yet, I hope that when you see these roles played by this diverse group of people, I hope that everyone sees that and feels an ownership in this country. And I hope that everyone sees it and feels that their voice matters and that their opinions can create change. And that anything that’s right, we can still celebrate, and anything that’s wrong we can still change.

The Knockturnal: 100 percent, I was saying before that I think our world really needs “Hamilton” right now. That this is a story that everybody really needs to see you guys performing it, so I think that it’s the perfect time for it to be on our screens. Is there something that you’re most excited about regarding the movie? Most excited for people to see?

Renée Élise Goldsberry: I’m just excited for people that didn’t make it to the theater yet to see it. I’m excited that it’s available to everybody, I’m excited that this will no longer be something that was exclusive that, you know, was good. I’m about, you know, democracy, I want everybody to have an equal share. In anything that I think is great and I think that Hamilton is a beautiful gift and I want everybody everywhere to be able to check it out for themselves and take whatever there is there. You know, for good.

The Knockturnal: How was your experience working on Hamilton different from your other Broadway experiences? Because you’ve had many, and you were so incredible in all of them, but how was this one different?

Renée Élise Goldsberry: This one always felt like it was for prosperity.  It always felt like it was bigger than any particular moment. Everything feels that way on a certain level but this, this always felt like I needed an extra dose of prayer. And you know an extra, just more time on my knees, more help, just to live up to it, just to enjoy it. I have had the opportunity outside of the shows I have been in myself. I had the opportunity to be around other people doing shows when they blew up. I mean I was in, you know, I was in Ally McBeal a million years ago, playing, I was one of the background singers. And I got to see a lot of really talented people just really kind of blow up. I mean, I enjoy watching people’s lives change as their dreams come true, I really enjoy watching that. And I know that it’s, as often as it is, it’s challenging. I always say life kind of sometimes hits you like an ice bucket challenge. So you know, every show feels that way, but Hamilton more than any other, felt like that. And I’m grateful that I was able to do it with this particular family because we held each other up. And lastly, I will say, my own family. My husband, my children. My family, without their support, I mean even now, even watching that movie, I had to hold my husband’s hand watching the film. Just, even that. Without my family, I wouldn’t have been able to do it so I’m so grateful that everyone’s family will have an opportunity to watch it together, mine included.

Hamilton is available to stream on Disney+ exclusively on July 3rd!

Dale Audrey R.D.H & White2Nite Want Us To Smile For a Cause