Check out our exclusive interview with Leslie Odom Jr. from the hit Broadway musical “Hamilton”, coming to Disney+ soon!

Lin-Manuel Miranda’s ‘Hamilton’ is a Broadway sensation that uses hip hop and a diverse cast to tell the story of America’s founding and Alexander Hamilton’s life. It has won 11 Tony awards, as well as a Grammy and Pulitzer, while also becoming the most exclusive ticket in town. As such, most weren’t able to watch the opening cast performing the iconic songs, but that will all change on July 3, when ‘Hamilton’ will be available on Disney+ as a filmed Broadway performance. The Knockturnal got the chance to speak with the incredibly talented  Leslie Odom Jr., who plays Aaron Burr in ‘Hamilton.’ The Tony Award-winning actor, dancer, and singer/songwriter discussed his love for ‘Rent,’ his experience filming ‘Hamilton’ for Disney+, and his most valuable piece of advice.

The Knockturnal: How are you? How have you and your family been doing during quarantine?

Leslie Odom Jr.: You know, it’s been pretty dull. We’ve found our flow, we’ve found our rhythm. We’re antsy like everybody else, it’s not anything like we’re used to. It’s not normal, but we’re doing what we have to do to keep each other safe, keep our neighbors safe. So all things considered, I’d say we’re doing okay, we’re alright.

The Knockturnal: How have you been staying busy and creative?

Leslie Odom Jr.: Oh, it’s not a problem staying busy at all. I have an Apple show, I’m on an animated show called ‘Central Park.’ We both write into ‘Hamilton.’ I’m working on a directorate. I’m also a husband and father of a toddler, so staying busy is not an issue.

The Knockturnal: So I want to talk about ‘Hamilton,’ of course, but I first would love to know where your passion for theater comes from. What made you realize that you wanted to be on Broadway?

The Knockturnal: ‘Rent’ is one of my favorite movies, but I’ve never seen the show.

Leslie Odom Jr.: Before the movie, there was a show. I was about thirteen years old when I discovered the show, and it changed my life. There was something about the themes of love over everything, friendship over everything, art over everything. It was really attractive to a young thirteen-year-old. I really dedicated myself to the dream that one day I would be a part of that company somewhere, that I would be a part of that group of artists. That’s the show that brought me to the theater. I ended up doing the show when I was seventeen years old; I was on Broadway in ‘Rent.’

The Knockturnal: How did you feel that first show?

Leslie Odom Jr.: I wish it for everybody. I wish that for everybody at one point in their life—because it happens once, it’s such a profoundly healing experience. It is just a really profound experience to expand on the timeline of your life and to know it in that moment that a dream is coming true. I’m not talking mythology, I’m talking that was my literal dream. I was standing on stage as it came true.

The Knockturnal: Wow that’s incredible. So once you were in ‘Rent,” you knew that was a changing point where you decided that was what you wanted to do with your life?

Leslie Odom Jr.: It was, yeah. To see adults really gave me perspective. Because I was the youngest person there, there were people in their twenties or thirties who had done three or four Broadway shows, who had apartments and families. It gave me the chance to get up close to it and to see how it could work practically. I went into the business of preparing for that. I went to Carnegie Melon University after that and really prepared for the journey ahead. Because I was talented, but I was not prepared. So I went and got myself ready.

The Knockturnal: So how many years later was this when you started performing in ‘Hamilton’ as Aaron Burr?

Leslie Odom Jr.: So that was over ten years later. When ‘Hamilton’ came along, I think I was 32 or 33 when I got the original email from Lin many years later. And I could really appreciate another full-circle moment. The show ‘Rent’ had given me so much at a formative age of my life and now I was a part of something that felt, in a lot of ways, that it was doing the same thing for some other young person.

The Knockturnal: What was your favorite thing about playing Aaron Burr in ‘Hamilton?’

Leslie Odom Jr.: Singing that score every night. Singing that brilliant music. It’s full of so much joy and so much life. That was my favorite part. And then also being a part of that company, looking to my left and to my right and realizing that I had a spot on a championship team, among all-stars.

The Knockturnal: So what was the process like recording the film for Disney+? That must have been really different than a typical show. How did that work?

Leslie Odom Jr.: It was. Yeah, it was different in that I was fortunate enough to have some television experience. Most of what I’ve done since coming out of college was actually not theater. I’ve done a fair amount of theater but I’ve done way more television.  Just because of the hours that I’ve logged in front of a camera since coming out of college, I was like okay, the cameras are here and now I get to add that layer to the storytelling. So there’s some subtlety that I was able to add into the performance that just would not have registered in the theater. Once they brought the cameras in, it was an opportunity to add.

The Knockturnal: How long did it take you to film ‘Hamilton?’

Leslie Odom Jr.: They filmed two or three performances and then there was one full day where they got on stage for close-ups and things like that. Not a terribly long time. Also, remember that by this point, I had done over 500 shows. We were really ready for however many times we needed to capture it. I felt like, I can do this. 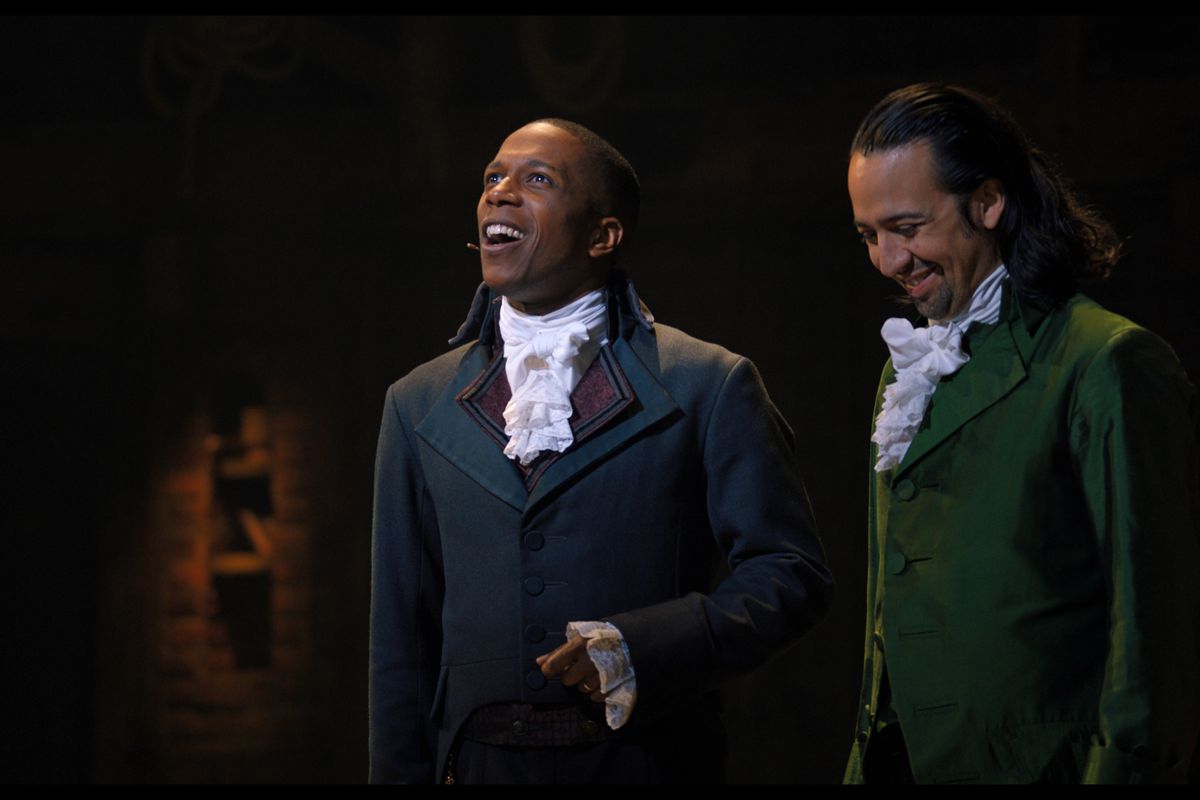 The Knockturnal: Once you’ve done that many shows, is it still as exciting for you? Does it ever get old?

Leslie Odom Jr.: Never gets old. Not for me. Because the thing we sign up for in theater is ephemeral, it slips away every moment we do it. You don’t get to hold on to any of it. Most theater that I’ve done, there’s no record of it. There are no videos of it; there’s the thing that exists in the moment and that’s it. Because of that, we knew that ‘Hamilton’ was not something we were going to get to hold on to. We signed up to be a part of something that we were letting go of the whole time. I feel very lucky that we now get to preserve it in this way, we get to film it, but none of us were expecting that.

The Knockturnal: What does it mean to you now that millions of people will have access to ‘Hamilton’ from their homes?

Leslie Odom Jr.: It means a lot because I know that ticket prices, at the height of the success of the show, were prohibitive. It was a real economic barrier to entry and that happens with supply and demand, and the capitalist society. We’re not the first popular thing that that’s happened to. This removes that obstacle of the cost; ‘Hamilton’ can reach whoever it needs to reach and that means a lot to all of us.

The Knockturnal: What advice would you give to aspiring actors and musicians?

Leslie Odom Jr.: It’s simple. Usually, the advice I give to people is to love it. Love whatever it is that you do, whether it’s journalism, law, medicine, the arts. Love it with your whole heart. And what I mean is as a verb. Think about it, talk about it, find other people that love it. Dream about it. If you love something hard enough, eventually it will love you back. Not always in the way you expect it to, but it will love you back in the way you need it to. I believe that.

Experience the original Broadway Production of Hamilton, streaming exclusively on Disney+ on July 3.

Exclusive: VICSON Kicks Up Its Heels With U.S. Launch