The film follows a mother (Mena) protecting herself and her daughter during a heist that has gone wrong at a storage facility. The Knockturnal spoke with Carlos Gutierrez about the film “Locked In.”

The Knockturnal: I thought it was interesting to see the relationship between Mena and her teenage daughter. Teenagers are typically “know it alls” and known to have an attitude. When Mena and her daughter faced difficulty with the criminals they both had to fight for each other. Why is it important for people to lay aside their differences to help others?

Carlos Gutierrez: Thank you so much! I really worked hard to flesh out not only Tarin, Mena’s teenage daughter, but all the characters. I wanted each of them to have a past that felt real, something they had left behind that maybe they didn’t want to talk about. I make it a point to give every main character a secret that they carry around with them. Teenagers are one of the most fun to write but also the hardest to nail down tonally. If they speak to adult-like then it feels unreal. Most teenagers are unsure of their thoughts and what they say. I really wanted Tarin, played by Jasper Polish, to love her mom but also have an existing grudge she could not see past. I think that her character speaks very much to our times, we have so many differences (even people living in the same house!) and we all have to way to look past those in order to make this country a place we our proud to live in.

The Knockturnal: What was the purpose of the setting being in a storage space and not having a place to run?

Carlos Gutierrez: I enjoy claustrophobic movies. I should say I enjoy scenes that are intimate in a confined space — even violence can feel intimate. Grand is great if you have a Christopher Nolan budget but independent films have to be more practical. I liked the idea of setting the film in a space that is usually relegated to one scene in a movie. How do you do that? So it was a challenge since the storage facility became a labyrinth where Mena’s character had to face her deepest fears and go slay the Minotaur (in the mythic sense).

The Knockturnal: The thieves were after the diamonds in the black bag. They were willing to kill, stab, or hurt others. Why is it that people are willing to go through any height or depth to get what they want, even if that means lying, cheating, or stealing?

Carlos Gutierrez: I think characters in movies are a reflection of real life. I tried to make sure that the thieves had as much motivation for what they were doing as Mena did. It was imperative that they feel real and although some of their motivations and backstory did not make it into the film, the actors knew that and used it when playing off each other. 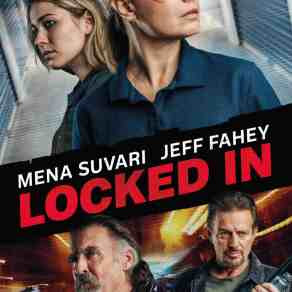 The Knockturnal: Although you directed the film “Locked In” you were also the musical composer. How did you decide on the music for this film?

Carlos Gutierrez: I actually was not but I can see that you might think that — same first name! We are also both Latino and so that helped with seeing that we had a mutual sensibility. Carlos Alvarez is a genius when it comes to interpreting the emotions I want the audience to feel in watching the film. We have a shorthand since he and I have worked on several projects including ones for Showtime and HBO. When we talk as director and composer we speak in colors. I am not a musician but I am very specific on what I want and he always finds a solution.

The Knockturnal: In this film we see betrayal, do you think betrayal is necessary to live’s process? If so, why?

Carlos Gutierrez: I think betrayal is a necessary part of life, it makes you aware of your surroundings and who you can trust. Trust really is the key to any relationship and once that trust is broken you develop a little more of a defense mechanism the next time you embark on a relationship. I think that is definitely relevant in the scene between Mena and her daughter when we find out what is at the heart of their disagreements. It all stems from one event that depending on who is telling the story it can be interpreted as a betrayal or a moral choice.

The Knockturnal: What inspired you to create this film?

Carlos Gutierrez: I was inspired by the location first and foremost. I wanted to create a suspense film in a contained location that had not been seen many times over. It was then a process of finding the right character and why this place represented not only her worst fears but also (in a weird way) the ticket to her salvation. The location is definitely a character in the film — it is what hangs over Mena’s character like a dark storm cloud until she decides to fight back and not be a victim of circumstance.

The Knockturnal: Where can people find this film and when will it be released?

Carlos Gutierrez: The film is being released by Saban Films & Paramount in Theaters & VOD on May 7th.

The Automat Is Coming Back & Quick Serving...

Theatre Review: ‘Blindness’ Some Light in the Darkness

What happens in Vegas doesn’t always stay in Veg

@therobertrichard sits down with knockturnal host

Our weekend kicked off with a great start after in