On March 27, at the opening of the annual New Directors/New Films (ND/NF) festival, director and writer Chinonye Chukwu presented her new film, “Clemency.” The screening was held at The Museum of Modern Art in NYC.

The film is about a warden named Bernadine (Alfre Woodard), whose battle between moral practice and standard protocol lands her in an emotional pit.

While Anthony (Aldis Hodge) is the next inmate on death row, Bernadine is haunted by the last execution, which causes her to take an inner-directed look at herself and at the humanity of all those she is responsible for.

We spoke with Chinonye Chukwu and Aldis Hodge about the ethics of capital punishment, mass incarceration and the US judicial system.

The Knockturnal: How are you feeling about the film now that it’s available for people to see?

Aldis Hodge: “I feel fantastic. I remember when I first saw the film. It is one that grips your heart because it may leave you feeling differently than you assumed that you were going to feel. We all have preconceived notions about what we think about the death penalty and things like that and how it affects us but once you sit in those seats, in the minds of these characters, it’s going to change a few things. And I love to do work that kind of messes with people to a point where it creates a progressive conversation and I think this [film] does that, so I’m really happy about it. I’m really excited.”

Chinonye Chukwu: “I feel great. I am still trying to take it all in and it’s still kind of wild but I feel really good.”

The Knockturnal: Can you talk about the genesis of the project and why you decided to tell this story?

Chinonye Chukwu: “Why not? Now is the time more than ever. Not just about more and more states seeing the failures of capital punishment and how unnecessary it is but with the US incarcerating more people than any other country in the world. Now is the time to tell the story, to stop and think and look at what’s going on in our backyard.”

Aldis Hodge: “I got really lucky, honestly. Chinonye Chukwu wrote me a beautiful letter and sent me the script. In her letter, she was just effusive about how she thought I was right for the role and how she respected my work. This also came from Bronwyn Cornelius, one of the producers. They were thinking about who could play Anthony. Bronwyn said, ‘have you thought about Aldis Hodge?’ So Chinonye looked into it and said. It’s very rare as an actor that you are offered, or contacted or approached to do a project that has really some magnitude to it. And for this, I am eternally grateful and really humbled by the fact that they even thought of me because they just allowed me a grand opportunity to some superlative work which I am really looking for in my career right now. And I’m really grateful for that. And they approached me to see if I would do it and I said, ‘heck yeah, let’s do it.’ You have the Alfre Woodard. Honestly, even if I didn’t read the script, it’s like, Alfre Woodard? Yes, it’s Alfre!” 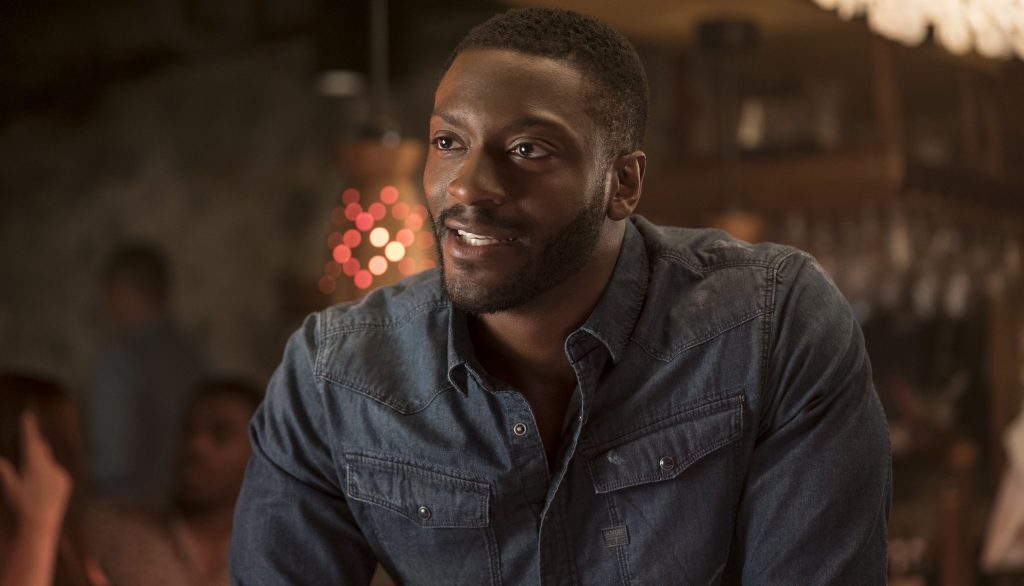 The Knockturnal: What was it like working with Alfre Woodard?

Aldis Hodge: “She’s fantastic. She really is fantastic. I mean, everybody knows that she is a pro, but what I like to see when it comes to actors and actresses of her status…I love to see that they’re still excited and interested. And that, she very much is. She’s been on this project for years, I think 2 or 3 years before. And she really was dedicated fully. And that’s what I love to see, the respect. Regardless of all the accolades and what not, they still respect the process and they’re still there to learn which is what teaches me. We’d run scenes together and she would allow me the space to do what I had to do and try to figure myself out. And it helps so much to have someone who is basically on the same page of, we gotta get this work done, let’s get it. It’s not about her, it’s not about me, it’s just, let’s get to work. That’s where you see teamwork happen on screen.”

The Knockturnal: What type of research did you conduct for the film’s purpose? Did any of that change your way of thinking?

Chinonye Chukwu: “I spent about four and a half years researching for the film. That included secondary research like talking to a lot of wardens and other correction officials and lawyers and people who are incarcerated — a man who was incarcerated on death row for 28 years before he was exonerated. But then I moved to Ohio and volunteered for a clemency case for a woman named Tyra Patterson, who was released a little over a year ago. I also volunteered for about 13 other clemency cases for women serving life sentences for defending themselves against their abusers. I created a film program in a women’s prison where I taught women who were incarcerated how to make their own short films and scripts. All of that informed my understanding of this space and the lives that are contained in it. And a lot of the people who I am in contact with and worked with, read the script and gave me meticulous feedback so everything just kind of played into one another. The research and making this film has really expanded my capacity for compassion for empathy and for seeing people’s humanity and not defining them by their worst acts.”

The Knockturnal: What are you hoping people will take away after viewing the film?

Aldis Hodge: “An empathetic mindset towards the idea of a broken judicial system. We’re shining the light on the death penalty but there’s so many other areas when it comes to the judicial system, primarily targeted towards black and brown brothers, that needs a little bit of a cleanup. Right now it just seems like there are a few things in the government that are just going crazy but hopefully, it charges people to have the right conversations and then put those conversations into action and do something to change what needs to be changed when it comes to judicial policy, prison policy, prison reform. When you do the research, the numbers are staggering in way where it looks like there’s a target on certain people’s backs. We have to work to remove those targets. As an actor, I want to do effective work where some of the work that I do can, not just for entertainment sake, but can actually move people to change. If we could be a part of actually improving prison reform, and getting things done, I would love to be a part of that history.”

Chinonye Chukwu: “I want people to see and feel and believe the humanities that exist between prison walls, and to know that they do exist and that we are a lot more connected to these humanities than we might think.”

An Fun Evening With Capitol Artist Maya B