In the Q and A, both Aldis Hodge and Storm Reid spoke about the physically demanding filming, and they each shared their greatest takeaways from being involved with the movie, which hits theaters this Friday.

On how long it took to shake the thriller paranoia…

Aldis Hodge: “The thing that was cool was thinking about how other people might be creeped out just because of what we know. Our director has a fantastic mind for drawing out suspense, which then, I think, really creates horror. There’s more to it; there’s an art to it, and I think he has a really nice skill for that. It was just cool anticipating what people are going to feel.”

Storm Reid: “I wasn’t scared watching it. I knew what was happening so even though I didn’t get to see the entire film get shot, I knew what was coming up next, so I think I just found enjoyment, found joy in watching other people get scared. There were a few times where I was like ‘oh, ok this is real. I’m a little scared,’ but I still know what’s happening, so I think I had an advantage. But it is a scary film. I understand why people would get scared. Like you said, you can’t see anything, the sound is crazy, she’s in distress, we’re in distress, it’s a lot.”

On filming fighting scenes with an invisible feat…

Storm Reid: “It’s challenging because you’re in either of two scenarios. One where you have nothing to work off of and you’re by yourself and it’s just you and the camera. Or you’re in a scene and there’s a person wearing a green suit, and it can be distracting. Thankfully, I didn’t have that scenario when I did my scene with the Invisible Man. I was working alone, which is really hard because I had to be super physical and also super emotional. I feel like it challenged me as an actress because I had to imagine the unimaginable, and then I just had to play off of my own emotions and how Storm would feel being tortured by someone she can’t see.”

Aldis Hodge: “Yeah, like that last scene that was in the hallway, he knocks the wind out of you and you fall back. That was a tough day physically. When I saw that scene I was [thought] flashbacks. I remember all the bruises. We were both fighting ourselves on that day. That took several days [to film]. They took their time covering that. I was like ‘we ain’t got it yet? I gotta throw myself on the floor one more gain?’ [Laughter] It was physically taxing but to storms point, it heightens your awareness of yourself as an actor because now you have to do so much more work in terms of believability and actually playing out the imagination of the scene. It is quite a bit of fun, but you learn to stretch.” 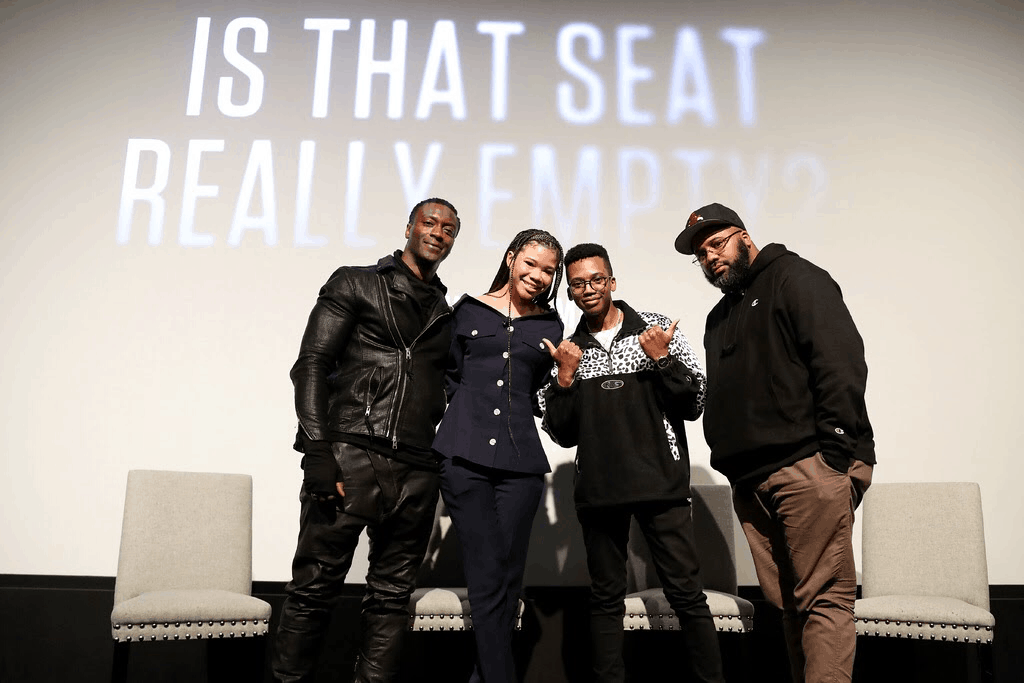 On joining the project…

Storm Reid: “My team sent the script to me and I read it in my kitchen and fell in love with it automatically because I realized that it wasn’t only a genre piece, it was an intersection of a thriller, a horror, and a sci-fi piece. It was also a piece talking about what people are going through in the real world, and I try to be very intentional about the projects that I choose to be part of. I want them to be purposeful and I want them to be impactful so I think that this movie has it all. I was really thankful for that and I knew this was going to be scary because this is what Leigh does, but also people will be impacted by it. That’s important to me.”

Aldis Hodge: “For me, I think it started off with a phone call, a FaceTime with Leigh and we just started talking, vibing, and I had read the script. But I really wanted to understand his vision and where he was going with it, what the intent was, etc., and once he explained all that, it sort of matched up to what I initially assumed. I was like ok, fantastic because also, I was looking for a project to be part of that was going to be fun. I had never done this genre before so that was pretty cool and to hopefully see if I was halfway decent at it. But it also presents a challenge for me because, to me, drama is like the easiest because it’s the most relatable, it’s something that we’re dealing with on a regular basis that we’re more familiar with. Comedy is tone, horror is tone, so the challenge of hopefully getting at that arrival was really enticing.”

On working with Elisabeth Moss…

Aldis Hodge: “Every single scene she was on 24/7, and she’s a fantastic castmate and a consummate professional…”

Aldis Hodge: “Elisabeth was definitely not a diva, which was quite refreshing. She had a lot of input, she was very supportive in our characters having our time in terms of being full. And I felt like we had a fantastic leader in her… she’s really A-plus. “

Film Review: “After We Leave” An Emotional Journey For Salvation At The End of The World