“The Tale” director Jennifer Fox along with her stars Ellen Burstyn and Jason Ritter hit the red carpet at the Tribeca Film Festival to discuss adolescent confusion, sexual abuse, and separating oneself from the work.

Reliving one’s past can be a hardship. It can become an overwhelming experience that does more harm than good. As a result, many people simply bury their past as a means of coping with the trauma that was left behind. It’s a way of distracting oneself from the problems that the incident caused, a method in which one need not confront the poisonous foundation that continues to effect one’s contemporaneous life. It’s hard to confront it, but when one does, one can begin the healing process and thus, move forward to new heights of acceptance and peace.

Jennifer Fox’s The Tale explores the complex and intricate paradigms that surround childhood sexual trauma, showcasing that children do not always understand what has happened to them is wrong. As is the case for The Tale‘s Jennifer Fox (who is telling her own story), some compartmentalize it as a romantic love affair that was their sexual awakening. It’s particularly personally arduous to revisit that moment in one’s life not from the perspective that you’ve always had of it, but instead from a non-biased, reality-based one that is difficult to stomach. The Knockturnal had the opportunity to talk to director Jennifer Fox and stars Ellen Burstyn and Jason Ritter about approaching such a sensitive topic, developing the narrative, and revisiting one’s past. Take a look at what they had to say below.

The Knockturnal: How was being involved in this project in relation to the way that women are treated?

Ellen Burstyn: Well I was very impressed with Jennifer [Fox] when I met her, and she talked about the relationship she had as her first love affair. And I said, “You still think of it as your first love affair?” She said, “I do.” She was 13. And he was in his 40’s, early 40’s. That’s not really a love affair. That’s something else. That’s exploitation. So it was very interesting to see Jennifer’s investigation of it and how it unraveled her memory. And I was just glad to take part in her story.

Ellen Burstyn: Well it’s been a long time coming. When I did Alice Doesn’t Live Here Anymore in 1973, it was the first time that a film was made consciously and specifically from a woman’s point of view. And when I put the film together, although I had Martin Scorsese direct it, I still had a woman editor and a woman production designer and as many women on the set as I could. It was the beginning of the women’s movement, and I thought that was the beginning of the change in the industry, but in fact, quite a few years have gone by for it to really blossom and to be the change I was really hoping for. I thought I was helping to initiate at the time.

The Knockturnal: I’d like to know, what was it like working with such strong empowered women, on set and in the production team and everything?

Ellen Burstyn: It was incredible. I’ve worked with lots of incredibly powerful women, but this was a situation in which the thing that we were making and the people that we were making it with were in line with each other. And it was an incredible experience. Jennifer [Fox] is one of the most remarkable people that I’ve ever met. I mean, her courage and sticking to her truth and not trying to sugar coat it, or say these are the complicated feelings that I felt – that’s incredibly hard to talk about and admit to, but it helps other people who may have also felt that emotion and gone, “Am I the only person? Am I crazy?” So it always helps, I feel like, for people to hear these kinds of stories. It’s just harder to tell them, but luckily we had a hero.

The Knockturnal: If you could just sum it up in one sentence, what message do you hope that people who see this movie will take from it?

Ellen Burstyn: I don’t know that it can be summed up. It’s a complex film. It’s many-layered, and it’s about not only how children can be seduced and how sexual abuse can take many forms. In this case, it’s not a violent form, it’s a loving form, but it’s still abuse. And also, how tricky our memories are, and the exploration of memories and how we may have remembered something in a certain way that if we look at with more maturity years later it might have a whole other meaning for us. 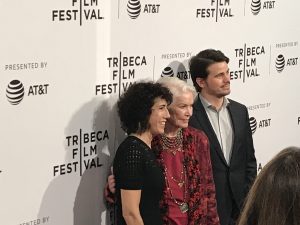 The Knockturnal: This is obviously a really personal journey that you went on. How did you find the courage to share it with so many people and then not only just the cast and crew but then to show it to millions and millions of people?

Jennifer Fox: You know frankly for me, it doesn’t take courage to tell this story. I think I’m privileged in that I’ve been a filmmaker for many, many years and I have the ability to turn things into art for other people to learn from. I am a privileged person. What it really takes is getting to a point where you have a perspective so that you can have some insight into what happened to you, to turn it into narrative. It really took until I was 45 years old to even call this child sexual abuse. Then, it was like, “Oh my God, I want to investigate it. I want to make a film in order to help people learn and grow.”

The Knockturnal: Ellen mentioned earlier that, that’s the whole complexity of the situation. It’s that, to children, it’s still seen as a romantic thing. She mentioned that you still see it as your first love affair in many ways. I was wondering how you reconciled that in order to explore the damaging way it affected you?

Jennifer Fox: I think in the movie, you have two voices. You have the voice of the 13-year-old who thinks this is love and is having a relationship and then, you have the voice of the adult who is coming to terms with, “Wait a second, that wasn’t what it was.” For me, these parallel narratives, exist simultaneously. If we really want to learn to understand what happens with abuse, we have to let them both exist and be able to embrace the complexity of it. That doesn’t mean we’re calling it anything but horror. But reality and life are much more complex than what we’d like to make it and by simplifying it, we actually hurt people.

The Knockturnal: The production of this movie began before all the New York Times and New Yorker revelations. I was curious did those horrific stories affected the post-production or any the lead up to the release of the movie?

Jennifer Fox: No. Frankly all that’s happened, happened in the fall of 2017. The film was finished by then. It’s just a miraculous, the Gods of timing, that allowed it to be released now at a moment when people can actually accept and actually digest this story. I think if it had come out a year before, it would have been too soon. It would have been too hard to watch. Now, people understand, “No, we have to watch it.”

Jennifer Fox: The real effort as a writer and a director was to capture both voices of the 13-year-old and really try to see through her perspective in an authentic way, not to make it through the eyes of my censored adult self. The film is really a dialogue between two characters of the same person. A younger self and an older self. The hope is that I succeeded because if we don’t understand how adolescents feel and think, we can never prevent child sexual abuse. One of the things is that adolescents think they do know what they’re doing and they do have agency. And in fact, they really don’t know what they’re doing. I can only say that as an adult. 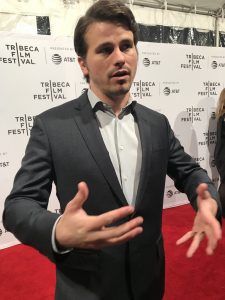 Can you talk a little bit about your character in this movie?

Jason Ritter: His name is Bill. He’s Jenny Fox’s running coach, Laura Dern’s character. Basically, he manipulates her into a very abusive situation but has basically gotten into her mind so much that well into her 40’s, she still has put it away as a special thing and put the more difficult aspects of it and the extremely painful and damaging aspects far away. It’s about this woman who is rediscovering what happened in her youth. I play the guy who did it.

Who did some horrible things.

Jason Ritter: Who did horrible things.

I was wondering, you’re such a lovable guy in social media and in the world. Everyone really adores you. How did you find that transition?

Jason Ritter: I talked a lot to Jennifer [Fox]. It’s her story. She’s very open about this. The character’s name in the movie is Jenny Fox. I had this incredible resource. We talked a lot about it. The big challenge of the movie for me was trying to not judge my character while I was in it. I could go home and be enraged all I wanted about it, but to serve the story, Jennifer actually wanted me to use some more of the qualities that make people trust you or believe you. 93% of the time that child sexual abuse happens, it’s someone who is a family member or a friend or someone that the community knows and trusts. We have this idea that it’s a creep at the park or something like that who looks like a creepy monster, but way more often than not, it’s the ordinary guy. It’s the guy who walked right on by. I think it worked in favor for this movie to approach it with that perspective. But it was hard for me. It was hard to use those things. It made me really angry. I ignored it for the most part. I tried to just focus on the movie. There was one moment where we were going through a scene and it all hit me. The fact that people do this to children who are so trusting and will look to the world of adults for guidance. The fact that someone could take that is sickening.

I am a graduate of New York University and am currently pursuing my master's degree in cinema studies at the same institution. My passion for films knows no bounds! It warms my heart and inspires zeal to talk movies with fellow cinephiles. Have any questions, comments or just want to chat? Email me at riyad.mamedyarov@gmail.com