Nate Parker wrote, directed, and stars in American Skin, a film about a father seeking justice after his 14-year-old son is murdered by police during a traffic stop.

It goes without saying that this film hits close to home for the countless Americans who have been the victims of police brutality, especially after a year that saw the rise of the Black Lives Movement, the unjust murders of Black people, and nationwide protests.

But the Birth of a Nation director discussed with the Knockturnal how he began writing the film years before the lives of George Floyd and Breonna Taylor were taken and their deaths were on the world stage.

“I wrote the film two years ago. It was in response to my relationship with my nephew when I took him into my home to live with us,” Parker said. 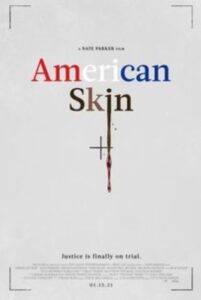 ways broken. He had to ride his bike to school every day and when Michael Brown got killed he came to me and said ‘Uncle Nate, if I get pulled over on my bike, what do I do?’ And I realized in that moment for all of my activism and work I was doing, I didn’t have an answer for my nephew that was acceptable.

“I said ‘call me and I’ll come meet you where you are’ – but then I said ‘well, don’t reach for your phone,  just get off the bike slowly, put your hands in the air, make eye contact so they can see your humanity.’ And I realized very quickly that I was traumatizing him with the conversation around engagement with a public servant that our taxes pay for and it really pushed me to create a peaceful arc that could really force the conversation about policing and the segregation about how Black bodies are destroyed.”

The Knockturnal also sat down with 13-year-old singer Keedron Bryant who sings the song I Know I Been Changed from the movie soundtrack.

Keedron went viral last year in a video where he sang a moving song I Just Wanna Live that his mother wrote in response to the killing of George Floyd. His video caught the attention of Oprah Winfrey, LeBron James and Barack Obama and the teen secured a record deal with Warner Music.

Keedron says he has yet to watch the film but is excited to see it as “it’s a film that’s definitely needed” right now in America.

“I sing I Know I’ve Been Changed featuring Simba and Gary Clark Jr. and I really had an amazing time in the studio recording that song because I really love gospel music and songs that have powerful messages and really speak to the culture to make change in this world,” Keedron said.

Parker said, “In making this film for my nephew I was making it also for [Keedron].”

The film offers a look at the perspective of officers who justify the killing on Parker’s character’s son – as well as the view of Black families who have suffered heartache at the hands of police.

Nate said that if there’s one thing he wants to come from this movie it’s “to save one life.”

“We cannot let Keedron and his work and his life be cut short for any reason. We have to change this whole paradigm so we can know Keedron, 50 years from now, will have had a legacy like a Stevie Wonder because we made it safe for him.

“So the one thing I want for this film is to save a life. To make a cop take a beat. For us to have solidarity around forcing conversations that need to be had in America,” Nate said.

Highlights From The ‘Feeling Through’ Special Screening & Panel