Check out our exclusive interview with Tayarisha Poe, Director of “Selah and the Spades”!

In her directorial debut, “Selah and the Spades”, writer and director Tayarisha Poe tells the story of Selah (Lovie Simone), the leader of The Spades, a faction at her elite boarding school, Haldwell. Along with her best friend Maxxxie (Jharrel Jerome), and protégé Paloma (Celeste O’Connor), Selah and the Spades must compete to keep a hold of the student body and their underground drug operation. The film initially premiered at Sundance Film Festival.

Poe was one of Filmmaker Magazine’s 25 New Faces in 2015, received the Sundance Institute’s Knight Foundation Fellowship in 2016 and was selected for the January Sundance Screenwriter’s Lab and the June Sundance Director’s Lab in 2017. Below she spoke with The Knockturnal about the premiere of her film, Selah and the Spades.

The Knockturnal: Where did the idea for the film come from?

Tayarisha Poe: I went to boarding school for high school so a lot of it is born out of thinking or feeling like that experience was so particular and not really seeing it in fiction films, and just wanting to capture the feeling of being a teenager and living away from home in this really, really, really privileged bubble. Also, just my love of mob films. I love The Godfather and that’s a big part of why I made this movie. I’m really interested in how people group together- like how we form factions throughout life if you want to call them that, and how certain people gravitate towards each other. And why some people have the sort of charisma where they can take over the world; they could lead us off a cliff and we would follow them. Why do some people have that power and some don’t?

Tayarisha Poe: Clueless was a big one for me. Amy Heckerling. I love that movie. Even the dialogue of that movie and the speed at which they speak. I love that movie. Brick by Rian Johnson is another good influence for obvious reasons. It’s like this daytime noir film set in a high school. Those are really big. Romeo + Juliet by Baz Luhrmann is another huge influence for me in everything that I do. In terms of its willingness to style everything as it relates to whoever has the most power at the time…like that movie is just so stylized and it’s all stylized from a point of view of emotions and I really like that. I really like that. That was a big influence as well. And then The Godfather, of course, but also just like all of these anti-hero films and TV shows that are so commonplace and were a huge foothold for the first decade of the 2000s; The Sopranos, Breaking Bad, Sons of Anarchy… all of these shows about older, white men doing what they want in service of the greater good, but the greater good is, you know, their ego. That’s what all those stories are about. I wanted to tell a story like that, but starring someone who looked like me because when I was a teenager I could totally understand that feeling of “I need to consolidate power. I need to figure out what power I have today and how I can get more.” I think that’s just the feeling of being a teenager and being alive.

The Knockturnal: What was your experience like making this film? Because I know you wrote it as well, so from that point of formulating the idea to where it is now, what was that experience like for you?

Tayarisha Poe: It was really interesting because it started out in 2012 as just a short story that I wrote about Selah watching her best friend Maxxie beat up this boy who was spreading a rumor about her. Then it turned into this multi-media series that I made in 2014 that was all about Selah, and her friends, and her faction, The Spades, and their school and just these little vignettes about her life as I was trying to figure out how to even write a feature film script. I started writing not a film, in order to figure out, how to write a film. It’s been a long journey. It’s 2020 and the movie is finally coming out, but it was necessary to go through those creative steps, and the different iterations of this story and characters to figure out what the feature would even be for me.

The Knockturnal: What do you want people to take away from having seen the film?

Tayarisha Poe: I really like the idea of sympathy for the devil. Not because I think Selah is the devil. I don’t even think she’s a villain. I always tell people, in directing Lovie, this was something that both of us swore by. I really think Selah is the hero of her own story. I think she’s still on a journey, but she is the hero of the journey. I want people to take away from it the ability to recognize that life is not split into a bunch of Selah’s and a bunch of Paloma’s and they’re all different from each other, but rather that everybody is both Paloma and Selah. We all have the ability to do damage to others and be damaged by others and I think that understanding that about ourselves… understanding the potential we have to cause harm and I feel like if everyone is at least a little bit more careful with the harm that we can cause to those we love, there will be less harm done- at least less intentional harm. I think a lot of harm is unintentional sadly. But I think that’s what I want people to take away: managing the Selah in themselves and the Paloma. 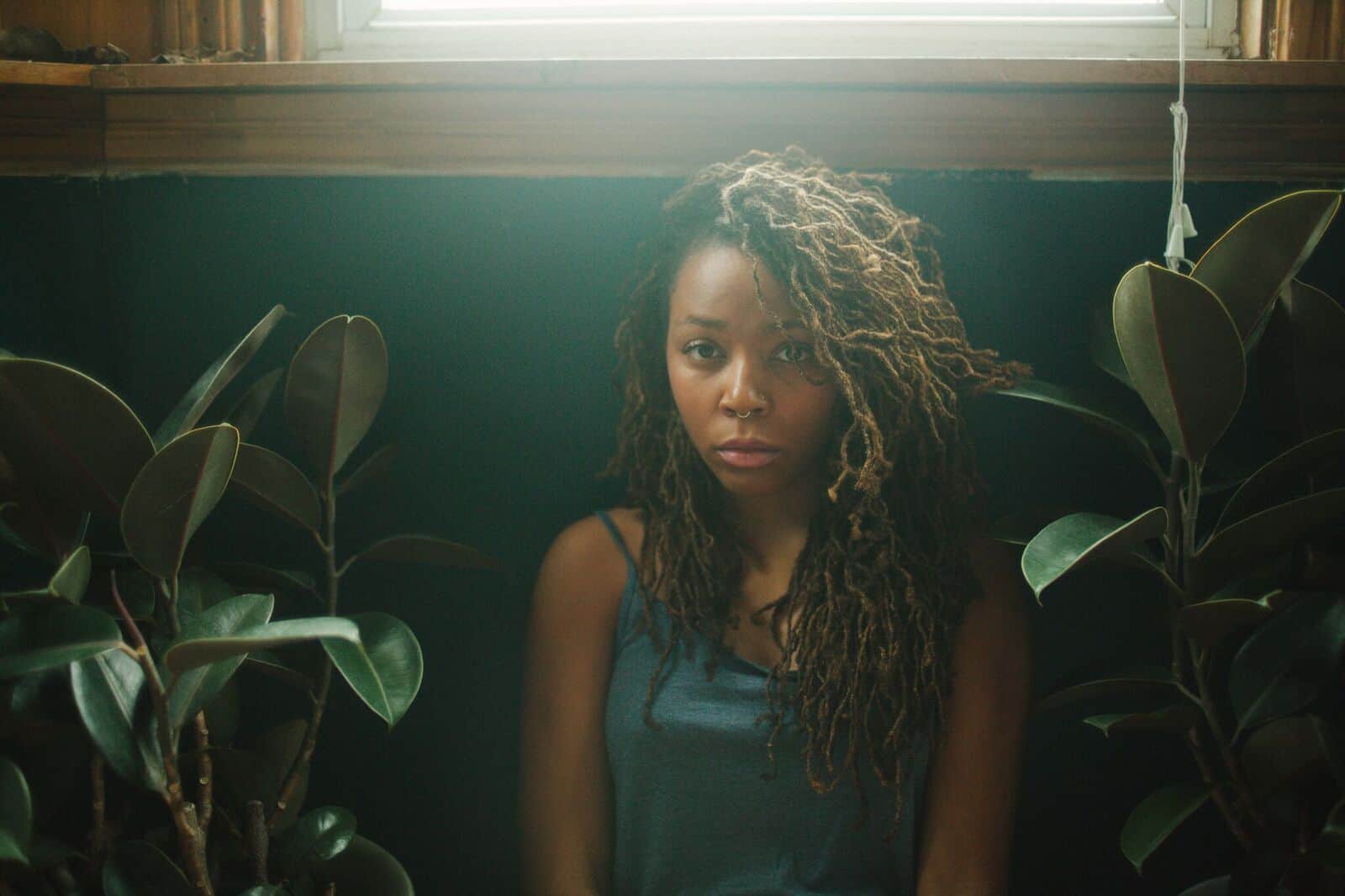 The Knockturnal: How do you feel about the film releasing online during a time like this, where everyone is home and available to see what it is that you’ve done?

Tayarisha Poe: It kind of feels like a little bit more pressure to be honest. Originally I was like “I’m down to release it streaming because people will find it at their own pace and watch it at their own pace” and that’s kind of fun like a puzzle or whatever. Now it feels like so many people are at home and a lot of people are understandably going through it and we’re all looking for a little bit of something to not make us necessarily feel better, but feel less panicked about the state of the world. I hope a lot of people watch it, but- I remind myself that it stands alone. It is a piece of art. The movie is a story all on its own and people get to now form their ideas, feelings, and opinions about it regardless of me and what I say it’s about. I think that’s kind of thrilling. I’m really excited for that part; for audiences to decide what the movie is about without me there. That’s really exciting.

The Knockturnal: What surprised you most about directing a feature film?

Tayarisha Poe: How easy it was? Not easy-because at sometimes it was kind of a handful, but it was very easy once I realized that making a movie is just collaborating with a bunch of different people and that being a director is really about being a good collaborator. Or being willing to create an environment where the actors, the crew members, like everybody feels like they’re cool and feels like their voice matters. I think that was what was really easy for me; just working with a bunch of different people and working with lots of different ideas and knowing how to “ride the wave” and figure out together what were the best aspects of all these ideas for this story that we’re trying to tell about Selah and the Spades. I didn’t realize that I was going to love directing as much as I did and it’s kind of addicting so…that’s cool.

The Knockturnal: What was that collaboration like with your main actors- with Lovie, with Jharrel, and with Celeste?

Tayarisha Poe: It was really open. I was very upfront with them from the very beginning that the words- we were in a good position because I also wrote it- so I was able to say to them openly and honestly, scripts are just words on a page and we can work together if these words aren’t working, that’s fine. I’m not married to the story that is written down that we’re reading from, because now there are these real human beings with their own experiences. And I told them, “I want you guys to add that. I want you to add yourselves to these characters.” It’s great. I really loved it because there were also times when they would come up to me and they would be like a little bit hesitant, and they would just look at me, all three of them, and they would say, “You know what. I’m not going to tell you what I want to do. I’m just going to show you.” It’s so exciting to just be able to watch a scene unfold and something was coming that you didn’t even know, that you didn’t plan, and that you didn’t write, but that this person was able to show you something about your own world that you’ve written. I think that’s really thrilling. Collaborating with them was an absolute delight. They’re so funny. All of them are so hilarious.

The Knockturnal: Who are some directors you look up to?

Tayarisha Poe: I really love Rian Johnson. He directed Brick, Looper, The Brothers Bloom. I love Kasi Lemmons. Eve’s Bayou is one of my absolute favorite movies. I really love Yorgos Lanthimos. He did like The Lobster, The Killing of a Sacred Dear…he’s just so weird. It’s fantastic but so weird. I love Wes Anderson’s commitment to crafting worlds. I’ve learned a lot from that and I love worldbuilding so I’m really drawn to his stuff. That’s really off the top of my head.

The Knockturnal: Would you say you have any dream actors you’d love to work with on future projects of yours?

The Knockturnal: Well I’m manifesting Anne Hathaway for your next project.

Tayarisha Poe: You and me both.

The Knockturnal: This is kind of a fun question: if you had an unlimited budget, what would be the movie you would make?

Tayarisha Poe: I would make- you know that book, Ender’s Game by Orson Scott Card. They made a movie and I saw it, but it wasn’t…whatever, it shouldn’t have been made. But there is this series of books, the Ender’s series of books, and if I had an unlimited budget of money, I would make that series for use. Hands down. Manifest that.

The Knockturnal: Where do you see yourself in the next 5 years?

Tayarisha Poe: I hope to still be doing what I’m doing now, just writing and directing. The thing that I know I want to be doing for the next five years, ten years, twenty years- however long I’m lucky enough to live, is just writing stories. Fiction primarily, but just writing fiction in whatever format that story calls for. I just want to write stories forever.

The Knockturnal: Do you want to let anyone know what are your next steps are or what can we look forward to next from you?

Tayarisha Poe: Nothing is announced yet so I don’t think I can say anything, but we can say I am writing and will be directing some stuff.

The Knockturnal: Lots to look forward to then?

Review: Selah and the Spades