Review: Heavy Wears the Crown For ‘The King of Staten Island’

The Pete Davidson-Judd Apatow dramedy premieres On Demand this Friday.

Pete Davidson is driving with his eyes closed, daring the world to interfere. He mutters an apology– in part to the drivers of the cars he just clipped on the freeway, but mostly to himself. He’s sorry. He’s sorry for his actions, for his inability to change and sorry for the tragic loss he endured when he was seven.

Pete Davidson is Scott, an aspiring tattoo parlor restaurateur (working name “Ruby Tattuesday”) and current owner of poor decisions. His firefighter father died a hero after saving lives in a tragic hotel fire. He understandably hasn’t moved on, yet his mother Margie (Marisa Tomei) and younger sister Claire (Maude Apatow) definitely have, leaving Scott in an isolated state of limbo.

Pete is Scott and Scott is Pete. The obvious parallels to Davidson’s real-life story– growing up on Staten Island, losing his father at a young age– are intentional. The King of Staten Island, directed by the modern king of comedy himself, Judd Apatow, is Davidson’s film wholeheartedly, for better or for worse at times. 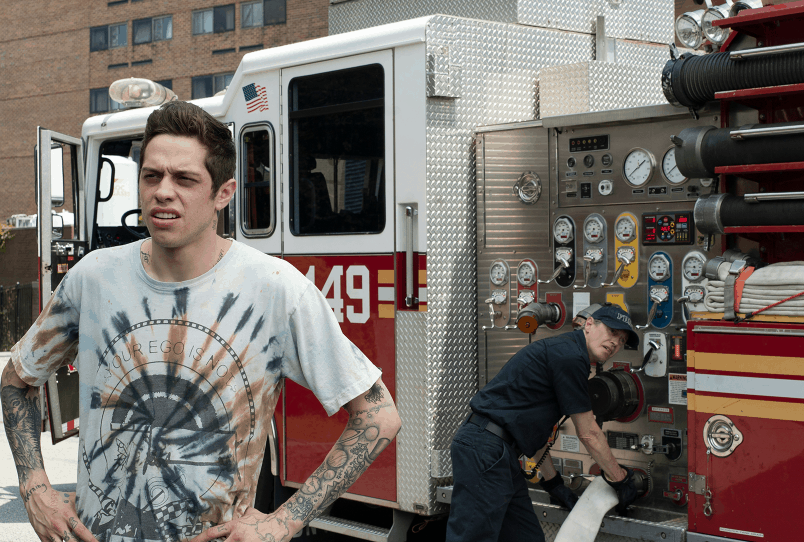 26-year-old Davidson co-wrote the screenplay with Apatow and former SNL writer Dave Sirus, and King is largely an ode to Davidson’s father, also named Scott. It’s natural to drop a tear after seeing a photo of 9/11 hero Scott Davidson holding his young son Pete, smiling before the end credits. It’s expected to gasp a little when Steve Buscemi– himself another firefighter who worked 12-hour shifts during the aftermath of Sept. 11th, searching for survivors in the wreckage–says onscreen that “heroes are necessary and they should be allowed to have families.” His character, the captain of a firehouse, is also named “Papa.”

It is, however, also normal to wonder where this particular movie is going. Like Scott (Davidson), King has a lot of false starts and tangents during its 2 hours, 17-minute runtime. There’s a wedged-in romance with Scott’s childhood friend Kelsey (Bel Powley), who is adamant that Staten Island is the “next Brooklyn” in terms of cultural appeal; Scott’s friend group of drug-dealing misfits; and a slew of celebrity cameos, ranging from Comedy Cellar gem Keith Robinson to comedic force Pamela Adlon to an overly-gratuitous bit with Action Bronson, plus Davidson’s real-life best friend Machine Gun Kelly. Apatow described the premise of the film to the San Francisco Chronicle as though “what might’ve happened to Pete [Davidson] if he hadn’t found comedy and was still flailing.” The extent to which the film mimics said flailing in its tone, pacing, and structure is debatable.

The crux of the storyline is Scott’s relationship with his mother’s new love interest, Ray (Bill Burr). While Ray doesn’t try to be a surrogate dad for Scott, the implication of Scott’s timely coming-of-age is not lost. Ray is also a firefighter, like Scott’s father, and Scott inevitably has to confront his own anxiety about moving forward. Burr breathes life into Ray, and his Captain Hook mustache is necessary to detract from how heartfelt his performance is, without being too sentimental. However, Ray’s presence at times strains the tone of the film. From the trailers, it seems like the relationship would be a vehicle for Scott’s growth, and while it does eventually deliver on that implied promise, Ray is not without his faults. The attempt to make Ray more complex just convolutes the story further, pulling it into yet another tangent. The character becomes a kind of antagonist for Scott, and even when Scott later reveals the tattoos he’s been designing for Ray, it’s unclear whether we’re supposed to find them endearing or disrespectful– or both, because Scott is just lovably rebellious like that.

The usually lovable Tomei, on the other hand, squints for much of her performance as Scott’s mom and Ray’s girlfriend. An early scene with Margie (Tomei) asking Scott to watch Game of Thrones has a subtle nod towards her underlying loneliness and their strained relationship, yet that is never fully explored. It doesn’t help that her styling is modeled off of the cast of Glow, complete with a feathered mullet. 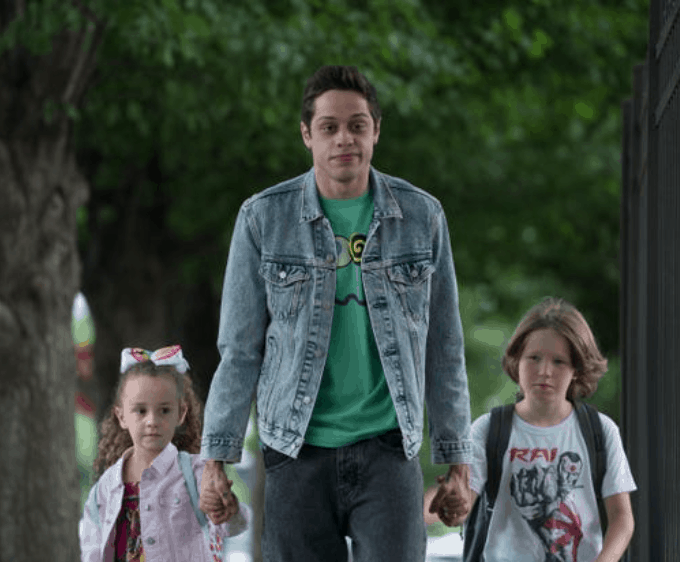 The small pushes like the Games of Thrones aside lend a glimmer of hope for later discussions about dependency, grief, or listlessness, but they never deliver. Instead, comedic tangents and unnecessary plotlines overcrowd the film’s pacing as opposed to letting the characters exist amongst each other.

Throughout the film, one is tempted to compare King to Davidson’s other recent release, Hulu’s original Big Time Adolescence. Davidson filmed Adolescence prior to King— which is also set in Staten Island– and worked closely with writer-director Jason Orley to craft his character, Zeke. While King focuses on the absence of Davidson’s father, Adolescence shows Davidson’s painful coping mechanisms. His performance is powerful as Zeke’s youthful frustration and self-hatred resonate with audiences. Those emotions are referred to in King but never developed, having Scott at worst come across as entitled and selfish, regardless of how many times he states that he’s on antidepressants. Adolescence revels in complicated sadness, where King only uses it as a platform for self-deprecating jokes that land merely half the time. The film weaves real concerns into farces so effortlessly that King is a defense mechanism incarnate, rushing through key moments despite its inflated runtime to remain on the surface.

No scene shows us Scott’s depression as much as that opening sequence: his scrunched face and repeated “I’m sorry”s do more than tell us how we’re supposed to view him. It’s only fitting then that the final shot of Scott gazing up at the Freedom Tower, with Kid Cudi’s “Pursuit of Happiness” pulsing, that we can finally see what he sees: his eyes are open, looking ahead to a bright, sun-filled future. And we’re happy for Pete. He deserves it.

The King of Staten Island is available On Demand beginning June 12.