Reshaping Beauty: A Discussion with Ashley Graham at The New School

With sharp wit, uplifting advice, and calls for body diversity in the fashion industry, Ashley Graham shared her story and graced the stage of The New School’s Tishman Auditorium last Sunday night.

As part of Get With The Times, a live event series for college students created by The New York Times, the interview was broadcast live on the publication’s Facebook page. Students from universities nationwide tuned in to the event online along with New School students in the audience.

Graham was interviewed by Joanna Nikas, the New York Times Fashion & Style Editor. The event was presented in collaboration with Parsons School of Design and The Schools of Public Engagement.

Students cheered, whistled and waved as Ashley Graham entered the auditorium and walked onstage to her seat. After greeting everyone, Graham and Nikas began the conversation with details about the beginning of Graham’s modeling career. Graham was first spotted by a modeling scout at the age of twelve in a mall in her native Nebraska. She moved to New York City at the age of seventeen to pursue a modeling career, and aimed to showcase her “curvy figure” in an industry that deemed doing so to be rare. 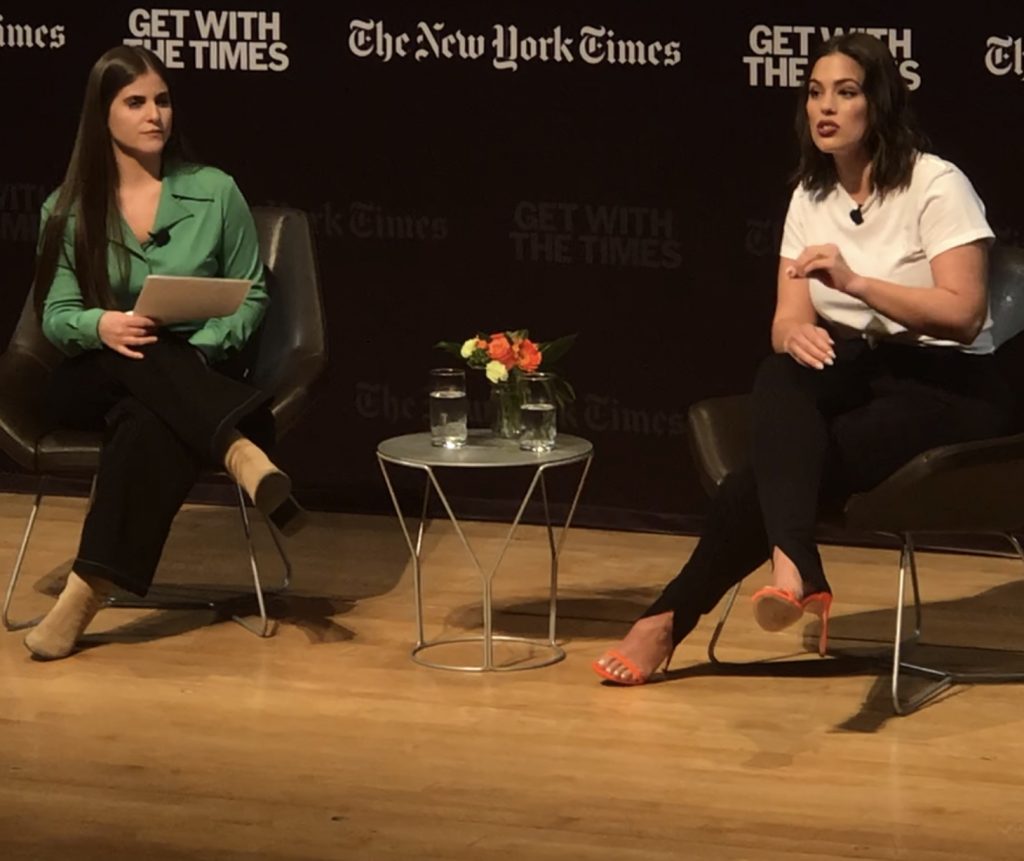 “I was trying to make business decisions not knowing anything,” said Graham, “I was walking into this wild world of fashion where they told me I was too big, to not talk, that I was just a clothes hanger. They always said I should keep my mouth shut. That’s the epitome of what I am not. I came from a family that said to be proud of who you are, be loud and have an opinion, but do it with kindness.” 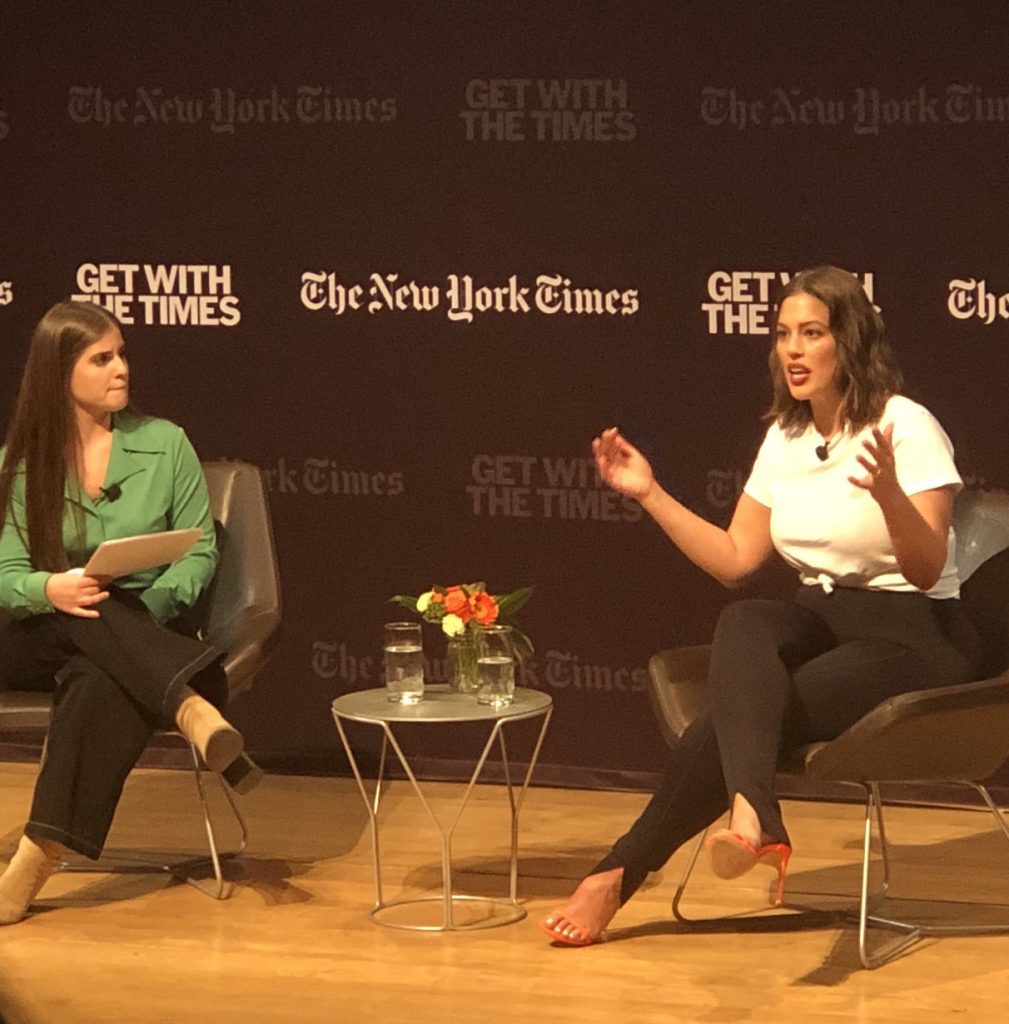 Graham opened up about her struggles with self-care at the time, urging students to prioritize their health and well-being. “I was seventeen, and then eighteen years old living in New York City by myself, making friends in a lot of the wrong places, sleeping around with a lot of the wrong guys and making really terrible financial decisions.”

At the start of her career, Graham said she was told to diet and lose weight, since curvier women with larger frames were not typical model figures at the time. “I had enough people tell me, ‘You didn’t get the job because you’re too big, because you’re a size sixteen and they’re looking for a size twelve.’ I asked if I needed to go on a diet and my agent said yes. His main quote to me that I’ll never forget was, ‘Put the Snickers down, Ashley. It’s time to get serious,'” Graham said. 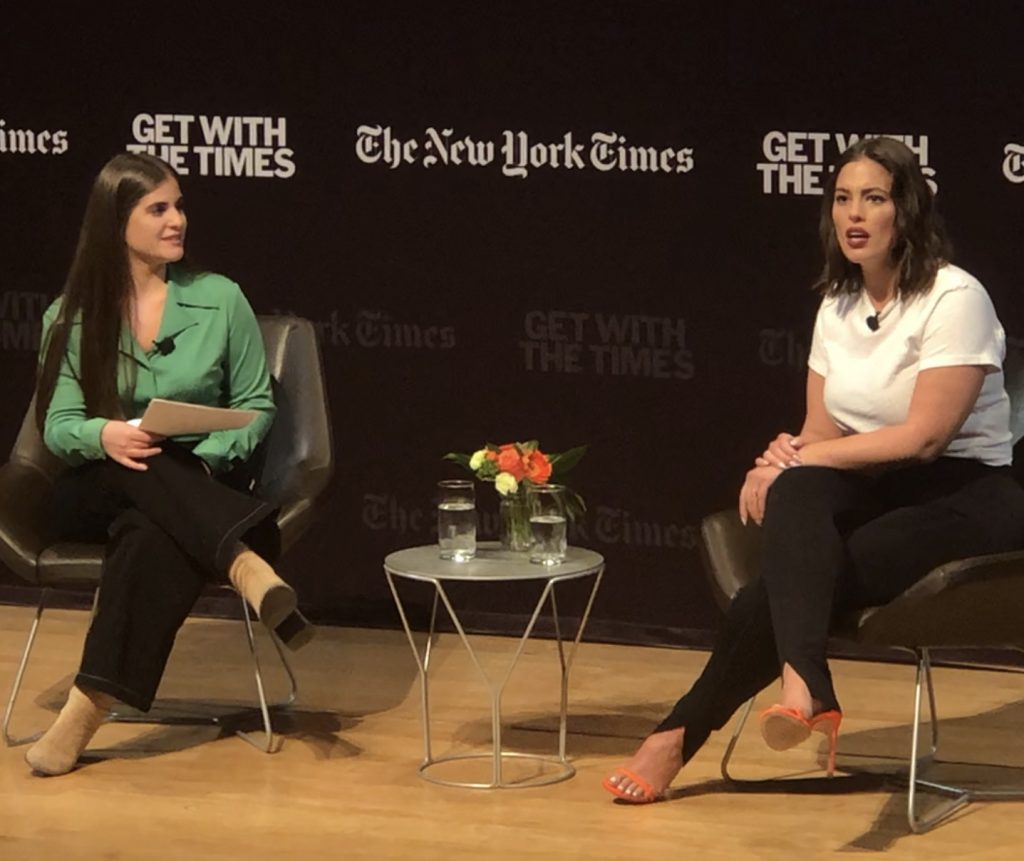 Body positivity is a current social movement that Graham promotes through her many career ventures. She recalled when she first realized the importance in having a positive body image as a young woman.

“This is the most terrifying thing a model could ever go through. You would go into an agency and they’d get the tape measure out. You would try to squeeze your hips in and suck your stomach in because you wanted to be thin. There was this idea that being thin was going to get you the jobs. Every time I kept going in, I was getting bigger and bigger. An ad had gotten cancelled because it was too risqué for a girl my size in lingerie to be on T.V. My career really blew up because I stayed positive and I spoke my truth.” 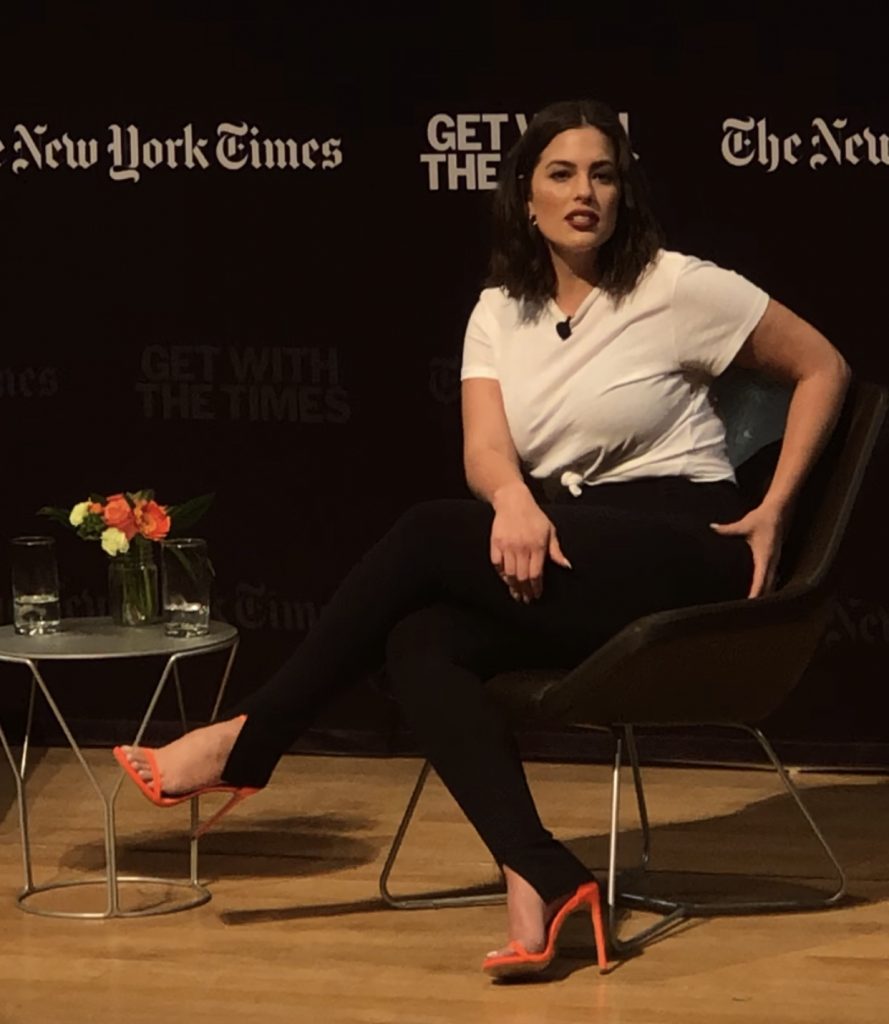 In 2016, Graham became the first size 16 model to appear on the cover of Sports Illustrated. Since then, she has written a memoir, A New Model: What Confidence, Beauty, and and Power Really Look Like. Graham also spoke about her podcast, Pretty Big Deal , and how she prepared for interviewing guests like Serena Williams and Kim Kardashian.

Ashley Graham encouraged college students who attended the event to consider making their own podcasts or starting their own businesses. Other topics discussed were conducting interviews, recovering from making mistakes at live events, and laughing off embarrassing moments. “You laugh it off, you keep moving on. Be real,” Graham said of making mistakes as an interviewer. 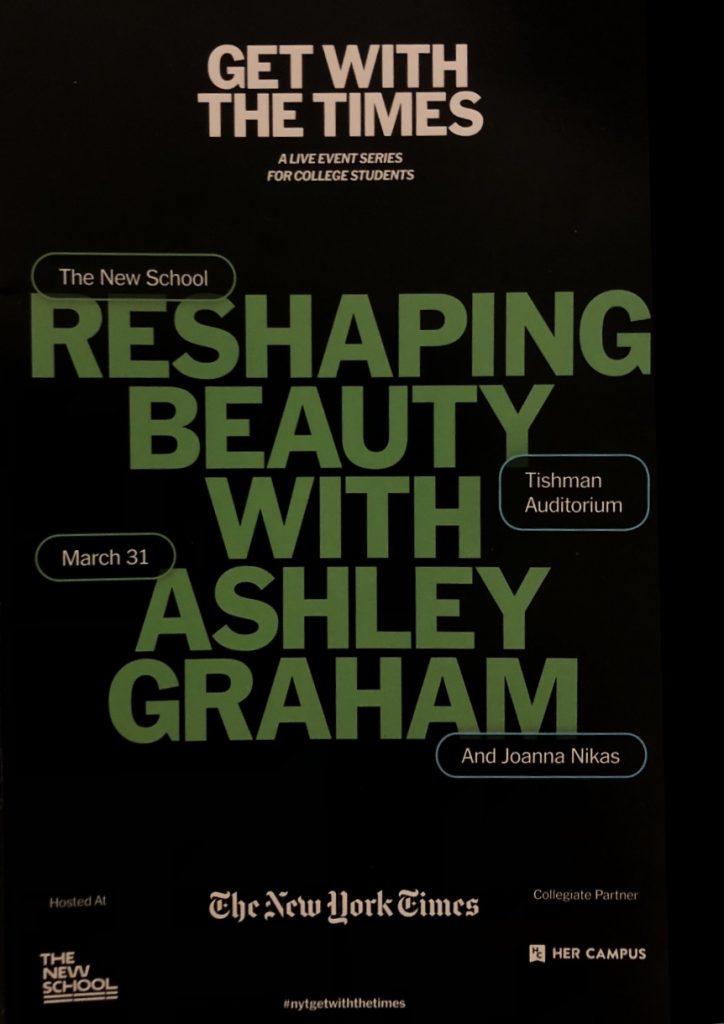 Nikas and Graham further discussed the body positivity movement that Graham is an advocate for, and how it relates to the beauty industry. “Did you guys know that lipstick doesn’t have a size? I always tell people if you look at any curvy girl size eight and above, and look in her closet you will see makeup, accessories, shoes and bags because they always fit,” said Graham, “To have Revlon say to me, ‘we agree that lipstick didn’t have a size and we want you to be the first curvy girl of your generation to have a beauty contract,’ I was like wow, that is a statement. That’s a bold move.” Graham also announced that her new lip kit will be launched on Wednesday, April 10, and that she was wearing a shade from it to the discussion. 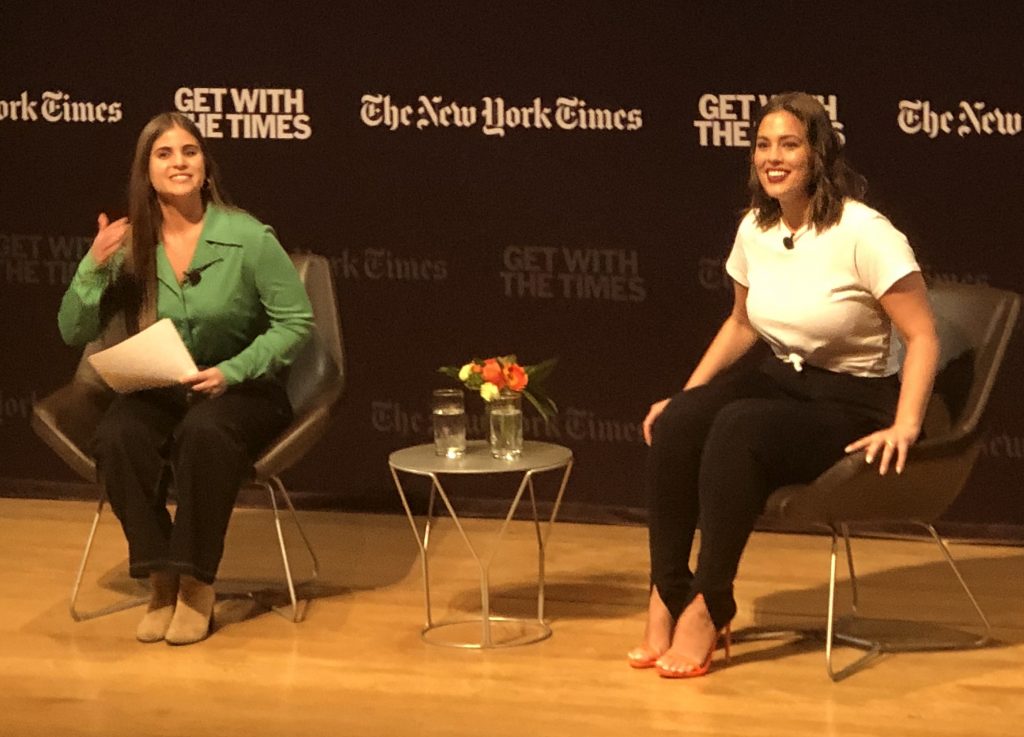 Similar to the Pretty Big Deal rapid-fire questions Graham asks guests on her own podcast, Nikas used the fast questioning technique as the event reached its conclusion.

When asked what her daily affirmation or mantra to herself was, Graham replied, “When I was in my funk at eighteen and everyone was telling me to lose weight, I came up with, ‘I am bold. I am brilliant. I am beautiful. I am worthy of all. I love you.’ This really started shifting my brain because I know words have power. If you’re telling yourself you’re dumb, or that you’re ugly or not worthy enough to have anything that you want, then that’s going to be your future,” she said, “I had to change my words, and it was not easy. It took me years to understand it and perfect it. It works, you guys. It feels weird when you do it at first, but it’s a really great exercise for yourself.” 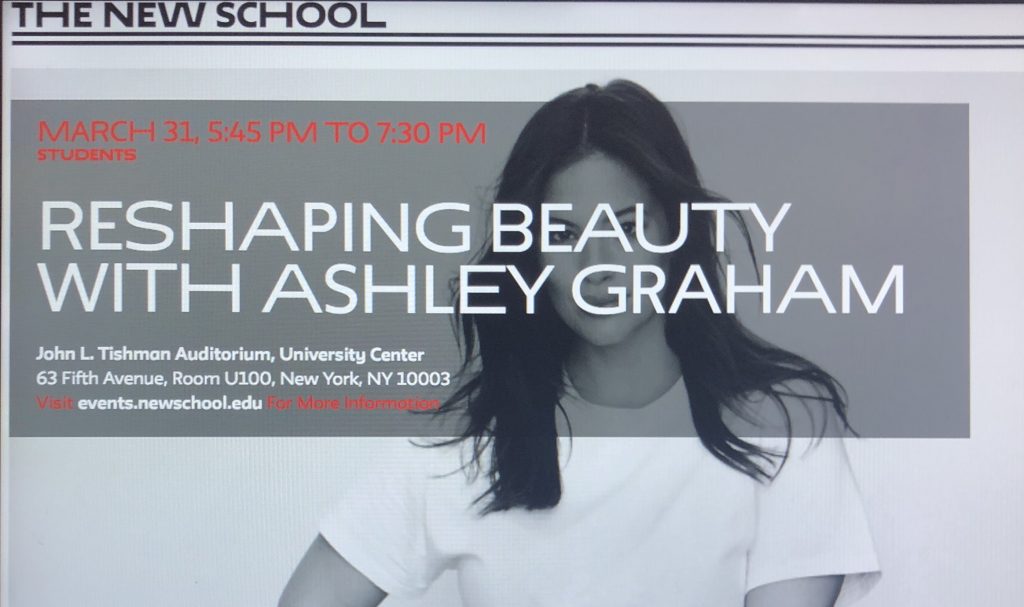 Ten students were invited to ask Graham their own questions. Five were in video format sent from schools across the nation, and five were from New School students in the audience.

When asked for her advice to younger generations, Graham encouraged those on social media to think of it as a tool to promote body positive posts and writing. “I have a message and people want to hear it, and a lot of that started on social media. That’s why I want to encourage all of you guys. You have a platform, use it. If you want to change someone’s idea or if as a consumer you want to tell a company what you don’t like, use your platform. Those people are really listening.” 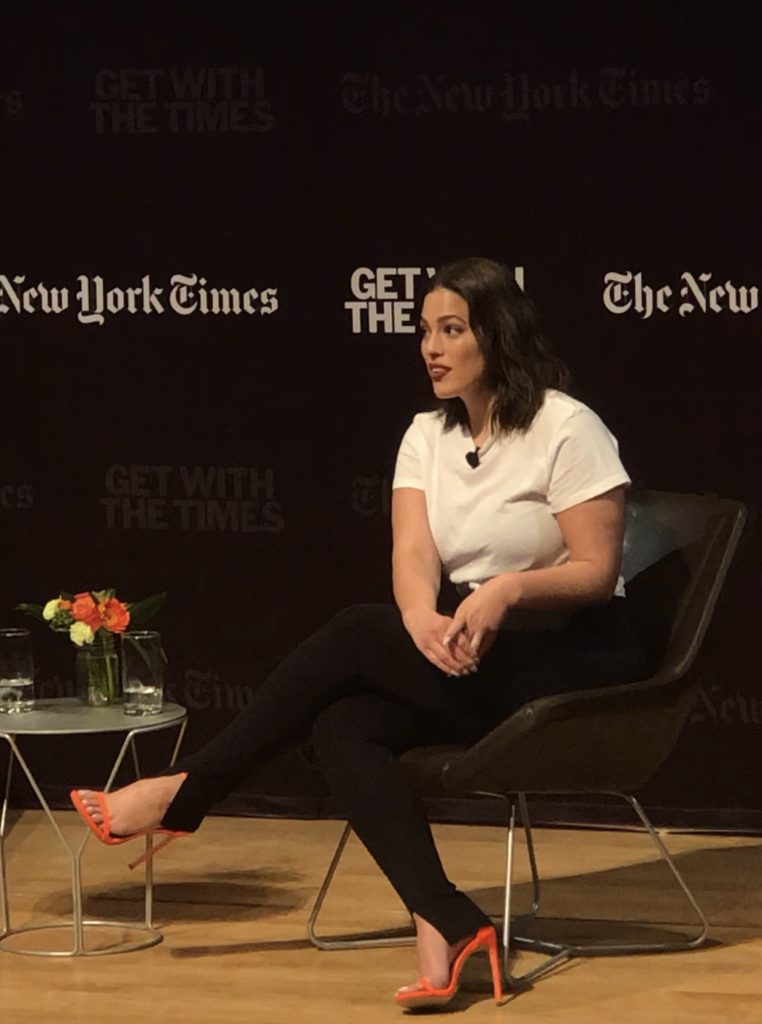 Graham also answered questions about her struggle in telling photo editors not to airbrush or retouch skin imperfections, as they facilitate important discussions of body image on Instagram and Twitter. “I just started telling my story on social media. I started not retouching my cellulite, and people were like ‘wow that’s new and different,’ so social media is a powerful thing. If more people used it in the right way, we could really change the world. I’m not afraid to talk about it, or show cellulite and stretch marks on social media. It’s a constant conversation.”

When asked how she defined beauty, Graham said, “Beauty is personal, it’s diverse, it’s inclusive and truly from within. I think that everyone has their own version of beauty. Fashion is finally slowly catching up to the idea that we all come in different shapes, sizes and colors.” 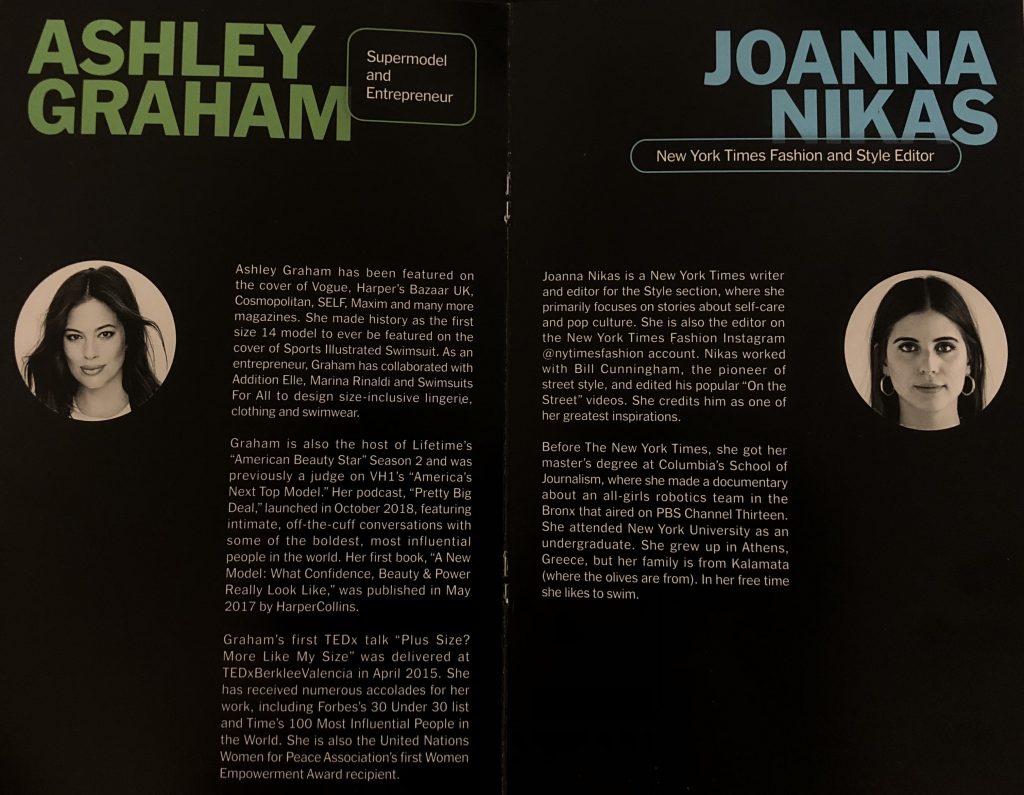 She also stressed the importance of intersectionality in body positive campaigns and movements. “As a curvy woman, I have to have this conversation. Women of color have had this body and curvy bodies for generations. Here I am, I know that I’m a white woman and it’s white privilege. I can’t stand that we haven’t had women of color who are curvy and have this voice.” 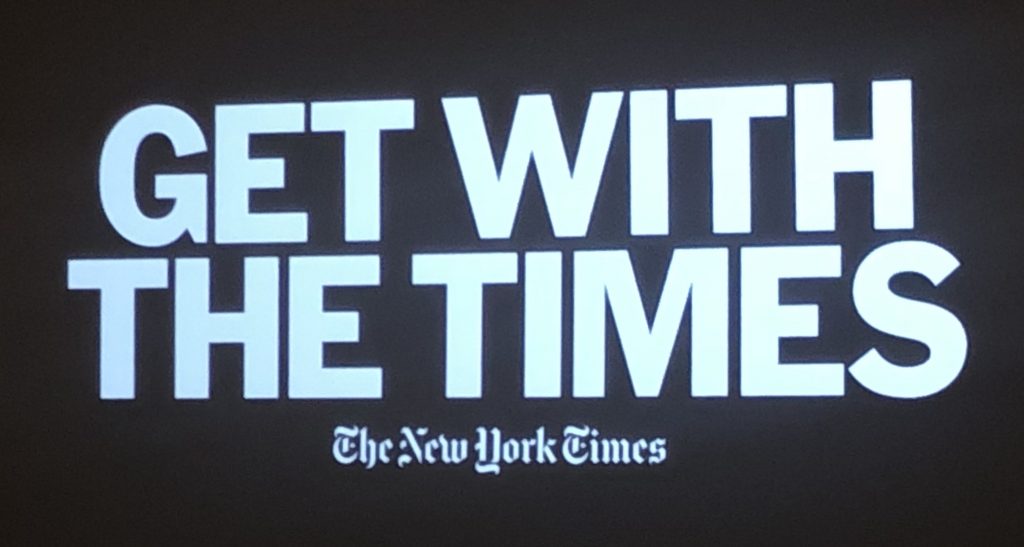 Graham cited fellow body positive activists, and encouraged students to look into their work.“There needs to be more representation because there really, truly isn’t. There are women like Marquita Pring, Precious Lee and Paloma (Elesser) who have incredible platforms, are of color, are curvy, sexy and have a great message that you all should follow,” she said.

Nikas and Graham thanked those in the audience for attending and everyone else for watching. Students received New York Times stickers, merchandise, and a pamphlet describing the event as they exited the auditorium. 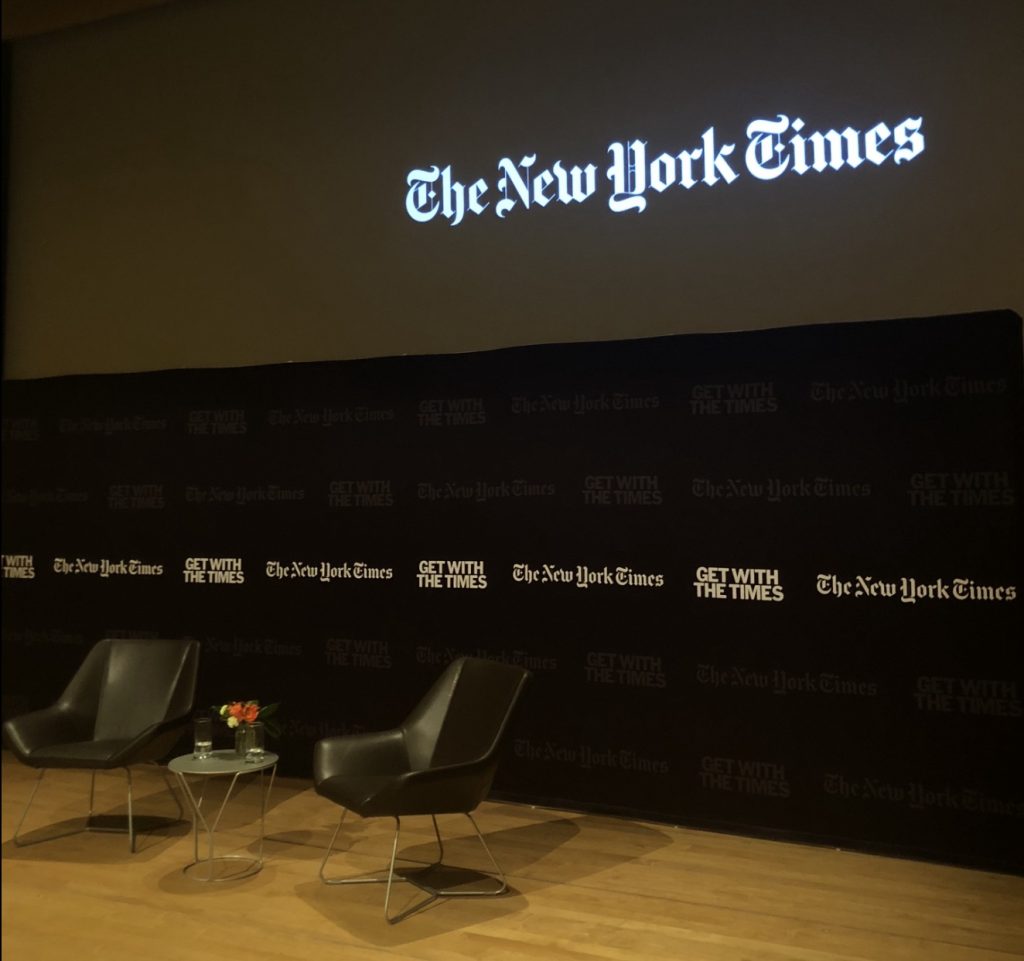 On the Scene: Variety’s Women of Power Luncheon