Film Review: ‘Behind You’

Big black mirror on the screen, what the heck have I just seen?

Well, since movie theaters aren’t open at the moment, it is time to go through streaming services and choose something to watch. This is an opportunity to see which films stand out amongst others of their respective genres. Here is a horror film????

Behind You, written and directed by Andrew Mecham and Matthew Whedon, tells the story of two sisters who, following the death of their mother, are sent to live with their estranged aunt, Beth. The younger sister, Claire, is especially traumatized by her mother’s death, despite the efforts of her older sister, Olivia, to comfort her. As they struggle to make themselves at home with the otherwise eccentric Beth, they notice that each mirror in the house is covered. When Claire uncovers one of the mirrors one night, she accidentally unleashes a demon that possesses her body. It is up to Olivia, Beth, and a friend of Beth’s to rid Claire of the demon before it is fully unleashed into the world.

There is no worse feeling to have during a movie than boredom, and unfortunately, Behind You is boring in almost every department. Absolutely nothing in this movie is worth talking about; not its cinematography, nor its soundtrack, writing, colors, or overall appeal. Some people might feel a need to champion horror films made outside of the Hollywood studio system, because a film may be a passion project. Anyone who sits through Behind You looking for evidence of passion is going to be vastly disappointed because there is not one hint of passion to be found. This is merely a film that is trying to combine every supernatural horror trope done before (and better) into one story without any flavor of its one.

Some of the worst horror films have moments that are clearly set up to be scary, but generate no reaction. Potentially every horror scene in Behind You is a jump scare, and they are the kind that can be seen coming from a mile away. Sure, you can technically call it a horror scene, but if a comedy movie fails to get the laughs it is clearly trying to warrant, would that be considered successful?

At the very least, this film could have had some compelling family drama to help carry the story along, similar to David F. Sandberg’s 2013 film Lights Out. While Behind You does have a story involving family drama, the filmmakers could not care less to make the story or characters compelling. The characters feel vastly underwritten despite the backstories they are provided, and the performances are at the level of last year’s live-action remake of Dumbo, and that is not compliment. It is not fair to blame the child actors, because they are working with what they are given, but would it kill the filmmakers to give their child characters in the film some personality? 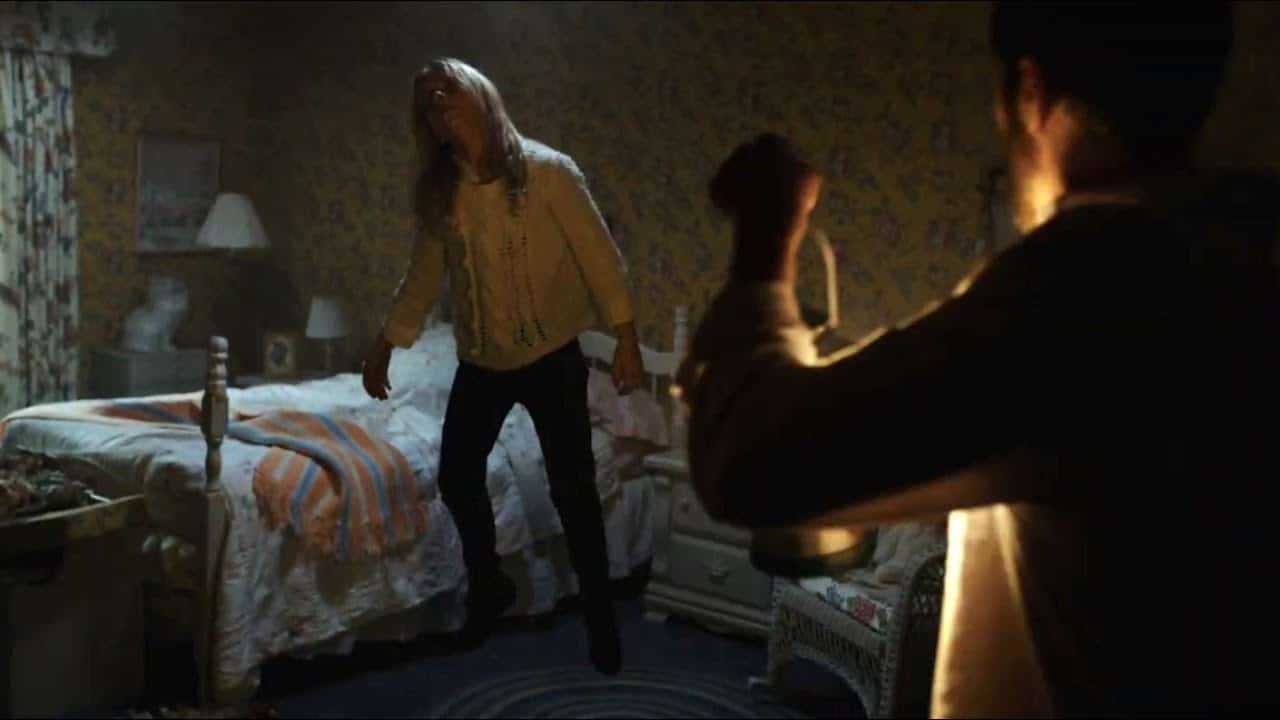 So is there anything even slightly interesting to be found in Behind You? Well, there is an interesting piece of casting, in that, when it is revealed who this character is, one wonders why the filmmakers didn’t cast someone older for the role. Other than that, there is nothing about this film that stands out, or at the very least, can hold viewers’ interest for more than ten seconds, which only makes one wonder if anyone who watches it one night will remember it the next day.

Anyone who finds Behind You scary clearly has not seen many horror films, and should do so now with the at-home time many of us now have. For a film to stand out in the vastly growing sea of entertainment, it has to offer something, and Behind You offers nothing. The only true blessing is that it will distract one from the current madness of the world, if only for a mere 86 minutes.