The Knockturnal: How did you get your start in entertainment?

Serena Rasoul: I have always had a creative bug, but as a child of immigrants, never felt it was something I could pursue. Entertainment had a low success rate and wasn’t for people that looked like us. At the time, Hollywood only showed it wanted caricatures of Arabs and Muslims, not three-dimensional characters going through the same challenges of life as everyone else. So I studied hard and got several degrees while always taking classes and performing on the side. However, it didn’t occur to me that I could actually be on TV until around 2013. That was the first time I was cast as an extra-turned-supporting-role as a TV Reporter on a “new type of show to be shown through a new type of medium.” That show ended up being, House of Cards, and that new medium is what we now call streaming as the first Netflix original series.

The Knockturnal: Who are important mentors in your career?

Serena Rasoul: My parents. They lived through war, family separation, immigration, language barriers, systemic injustice, racism and still have the nerve to smile. And that’s not even counting the normal trials and tribulations of life they had to endure like barely surviving financially, not having health insurance, or what to do when your 16-year-old totals her first car. They may not know a thing about TV/film, but they are my mentors. They taught me what it takes to survive, and, more importantly, how to thrive.

The Knockturnal: Tell us about your new casting agency and what inspired you to launch it?

Serena Rasoul: My casting agency came about after an experience I had several years ago. I was on the set of a very popular show on a large network. I was cast as one of several hijab-wearing women. When I got to set, the wardrobe department did not have hijabs (headscarves). So I ran to my car and brought back what I had. When I arrived, I asked wardrobe where these women were supposed to be from, explaining that some women wear hijab differently depending on where they live or where they’re from. The response was, “We don’t know, just make them look Muslim.” I was not surprised that they didn’t know, but I was shocked they asked me to wardrobe the talent. I did what I could and filmed the scene. But that interaction never sat well with me. It took me a couple of years, but I decided 2020 was the year to make change happen. After several discussions with other Muslim talent and with community leaders, I decided to take a leap of faith (*pun intended!*) and founded Muslim American Casting in Jan of 2021 in order to both cast this talent and consult those productions that need it. (However, a more sustainable solution would be to stop hiring consultants and to start hiring diverse talent!)

The Knockturnal: What projects are you currently casting and how can people connect with you?

Serena Rasoul: We have recently been in touch with a Golden Globe Nominee’s production team–who are actively working to increase diversity and representation on-screen. We have been invited to be a part of some exciting research studies coming out highlighting the disparity as well. We hope to use this data to convince large networks, studios, and streamers to build out accessible and sustainable pipelines into the industry.
Our website is www.MuslimAmericanCasting.com
Producers and Filmmakers can reach us at info@MuslimAmericanTalent.com
Muslim and SWANA talent can submit their information into our talent database here: https://www.muslimamericancasting.com/talent
And people can learning about our latest casting notices or connect with us on Twitter or Instagram at: @MuslimCasting

The Knockturnal: What are your hopes fr the future?

Serena Rasoul: We have strategically chosen the name Muslim American Casting with the acronym MAC, because we want it to be so common to see Muslims and BIPOC in mainstream TV/Film and Commercial industries that we, as a specialized agency, are not needed. Instead, we become Many and All Casting (MAC). Until that day, we will strive to be a bridge between quality Muslim/SWANA talent and “the industry.” 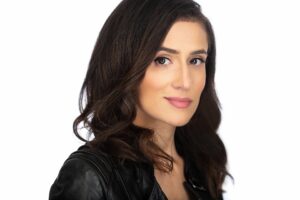 Serena Rasoul: Although I do think it’s important for underrepresented communities to be on-screen, it is just as important that these communities to be represented behind the screen and on the business side of the industry. It is not enough to create a one-off writers workshop for BIPOC and then never give them a pipeline for growth beyond a writer’s assistant in a writers’ room. They need to be writers, showrunners, producers, directors, and executives making the decisions. What good is it to have a set of diverse talent and writers if the only shows bought are bought by the same people?