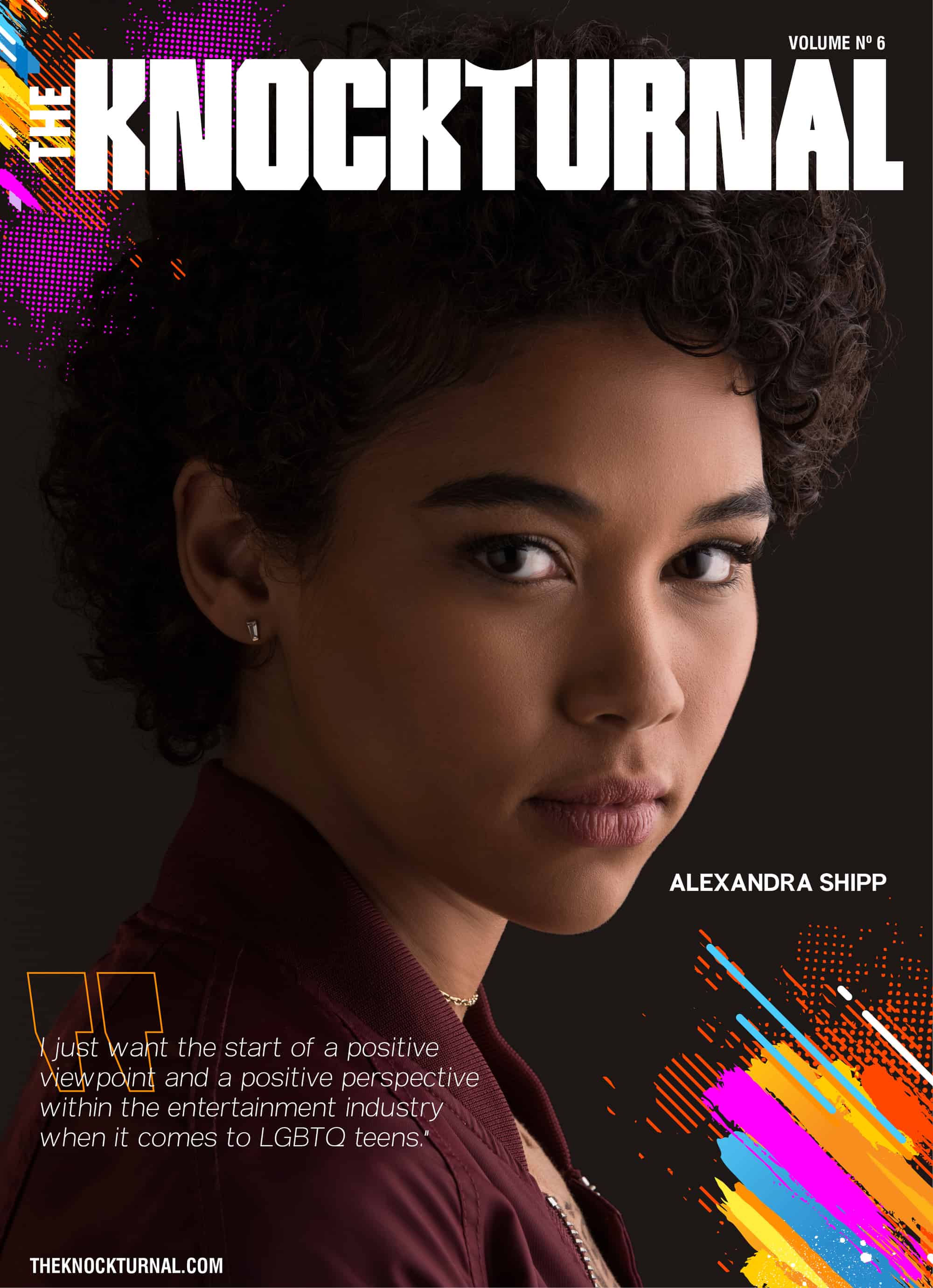 Self-love and acceptance is the name of the game for emerging star, Alexandra Shipp.

At the age of 26, Shipp carries herself with an admirable amount of poise and self-confidence. Many may recognize Shipp as the fiery, young Storm in X-Men: Apocalypse, but her character, Abby Suso, in the upcoming teen, romance drama, Love, Simon, radiates something a bit different than audiences are used to seeing Shipp as.

Love, Simon follows seventeen-year-old Simon Spier (Nick Robinson) as he grapples with his final year of high school, and a much more pressing issue; Spier has yet to tell any of his family or friends that he’s gay, not to mention that he quickly fell in love with an anonymous classmate that came out as gay online.

Spier goes to great lengths to try and keep both his secret and email exchanges with his newfound love under wraps. But as his curiosity to uncover the mysterious identity of his love (who goes by the alias “Blue”) grows, he finds that it becomes increasingly difficult and nearly impossible to maintain his secret, without sacrificing the closeness of his other relationships in the process. Based Becky Albertalli’s acclaimed novel Simon vs. the Homosapien Agenda, the film Love, Simon is both a heartfelt and comedic coming-of-age film appropriate for all audiences and will leave you wanting to laugh and cry at the same time. 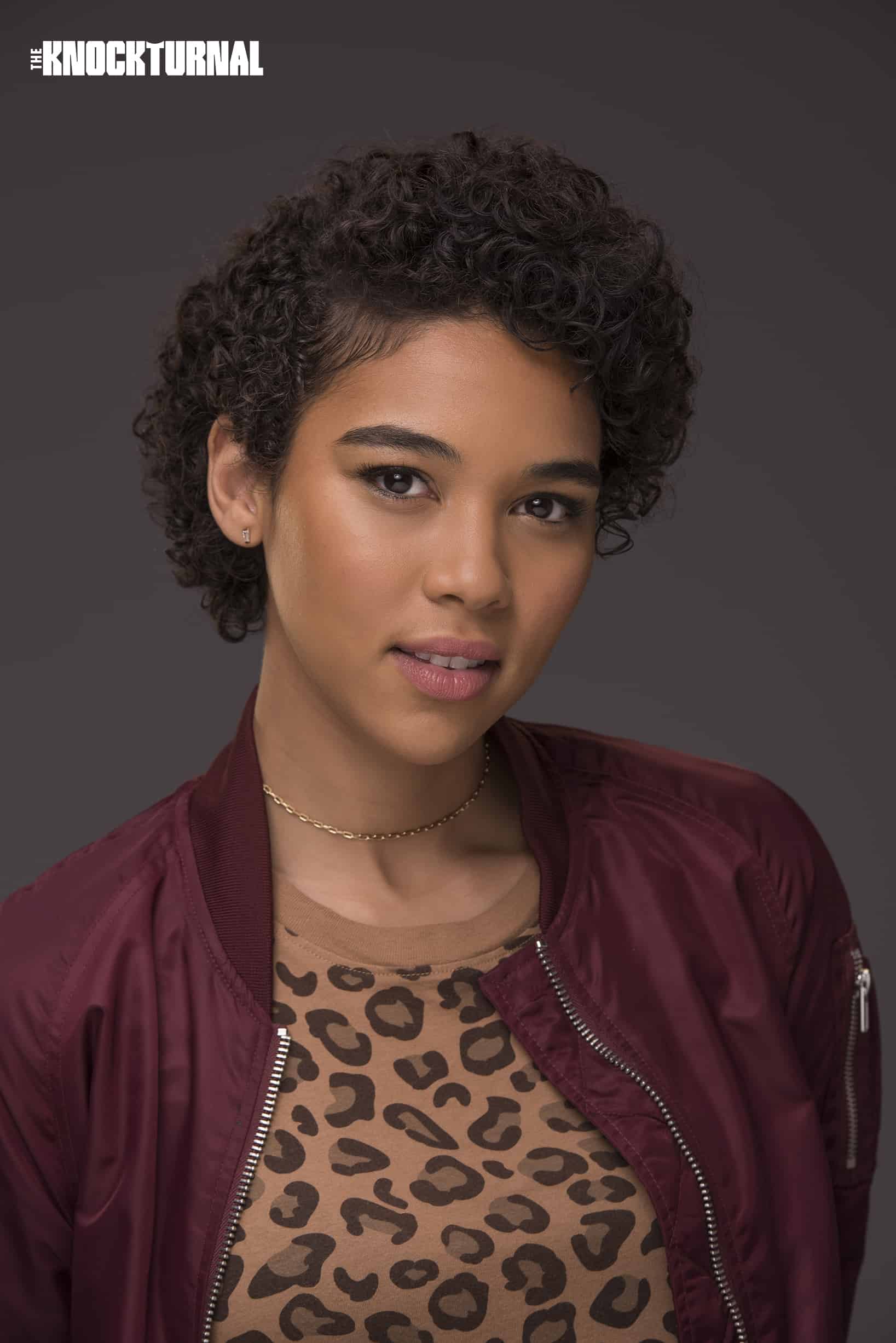 Shipp’s character, Abby, emits an effervescent, fun-loving attitude throughout the entire film, and her stabilizing presence acts like a missing puzzle piece for the friend group’s dynamic that they didn’t even know they needed. Shipp hopes that Love, Simon will act as a source of inspiration for future generations which may grapple with their identity. 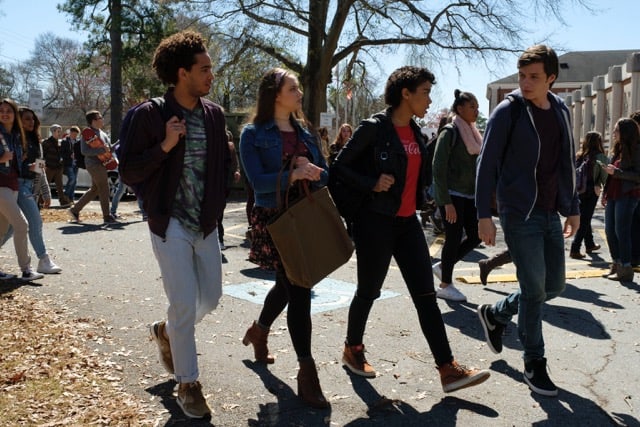 “What I love about this movie is that we’re talking about a character, Simon, who is just trying to be normal. And what he realizes is that normal is what he is, and that he can just be himself and that people will still love him,” said Shipp. “I think that is something that can really change the way our kids and this next generation represent themselves. And instead of hiding their true self, they’re embracing it.”

Shipp’s character is the first person Simon, himself, actually comes out to. Abby is relatively new to town and her free-spirited nature draws members of the group and the school community to her. Simon even notes in the film that although he hasn’t known her for long, it feels like she’s been a part of their lives for years.

I think the reason why Simon comes out to Abby is because it fits. He’s known her the shortest amount and so she has no lifelong preconceived notions of who he is. And also she comes from a different city where I think that she’s experienced more of that culture and he can tell. And so it’s not as scary to tell someone who is very open and free.

Shipp shines throughout the film, and her eclectic, fun-loving disposition is undeniable. While she brings an outwardly playful attitude to Abby, Shipp doesn’t neglect to tie in her own wise-beyond-her-years intellect and maturity to the character. Abby’s warm and accepting attitude felt like an extension of Shipp, herself. 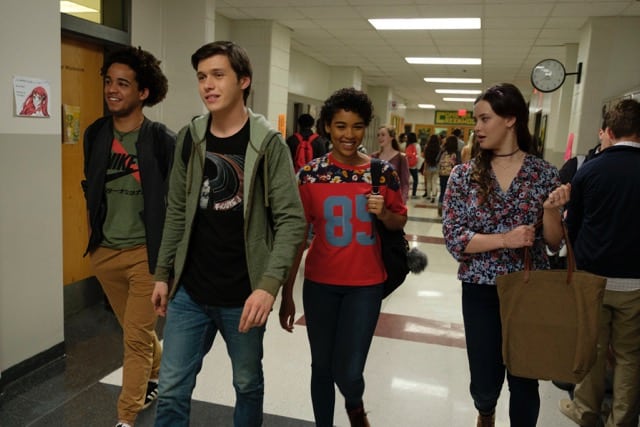 “Abby understands that who someone else is attracted to doesn’t affect her because she knows who that person is on the inside. She knows that person inside and out. I loved the way that they approached it, so sweet and so simple because that’s the reality of the situation. That’s how it always should be. It should be easy, it should be, ‘Okay, cool, awesome. That’s what you like? Awesome. Do you, boo. Doesn’t affect me, I’m happy that you’re living your truest self and you’re being honest with everyone around you.'”

She reflected on the filming of Love, Simon, adding that the rehearsals established more than just a close relationship between her and her character, but that the process had forged an undeniable bond between the members of both the cast and crew as well.

“We did rehearsals with the director and everyone together, and what was really beautiful about that was it really created a great friendship. I love everyone that worked on this film. We had so much fun. We loved each other, we shared so many great stories about high school and life,” said Shipp. “There’s so much love that was put into this Love, Simon movie. It’s so lovey and that’s the type of content that I want to put out into the world. It’s love.”

According to Shipp, working with director Greg Berlanti enabled the film to come together on an exceptionally personal and intimate level.

The connection, especially among the cast members, is extremely evident not just on the big screen, but in the way Shipp’s voice lit up as she recalled filming the scene where Simon first reveals to Abby that he is gay.

“When we filmed that scene it was a night scene, so we were all in this little neighborhood at midnight. It was really cool because it really set the stage. We were driving around in this car … I personally think that Nick is the worst driver,” giggled Shipp. “He is just a little old man trapped in this young man’s body. It’s so funny. He’s driving slow and putting his blinker on for no reason, and I’m like, ‘No one’s on the road, Nick’ and he’s like, ‘People need to know!’ I’m like, ‘No one’s around, it’s ridiculous!'”

The closeness between Shipp and the rest of the cast and crew enabled her to enjoy light-hearted moments like goofing off and driving around at night, juxtaposed with much more pressing content. She remembered just how emotional capturing this pivotal moment between Simon and Abby was. According to Shipp, filming that scene, in particular, was incredibly moving not just for the actors, but for the whole crew involved.

A lot of our crew is a part of the LGBTQ community. And so when we were watching it and we were doing it, we’re going back, we’re talking about it and going back and doing it, we wanted this to be sweet. We wanted it to be loving. We wanted it to be simple because we want to show people that it doesn’t have to be this huge traumatic thing. It doesn’t have to be the most monumental moment, it can just be something sweet and simple and easy.

Evidently, self-love and acceptance is much easier said than done. It is a constant journey and many struggle for a majority of their lives before coming to terms with their own identity. But Shipp encourages those struggling to find a healthy outlet where they can feel free to express themselves without judgment.

“I’ve always found that journaling really helps. And sometimes writing it down and putting it on paper is an easier way to then express yourself fully, and to say, ‘This I who I am. This is what I love. I’ve found someone that I love and this is who they are,’ or ‘I’ve found something that I like and this is where I’m at,’ and being honest with yourself. And then I think that it’s easier to have those conversations with other people when you know exactly where you’re at in life. And not rush yourself.”

Shipp’s social media presence is painted with inspiration and reminders for her exponentially growing fan base to stay true to what makes you, you. Shipp has always been brutally honest and exceptionally vulnerable in regards to her grounded self-confidence and journey for acceptance and has paved the way for conversation through her advocacy. 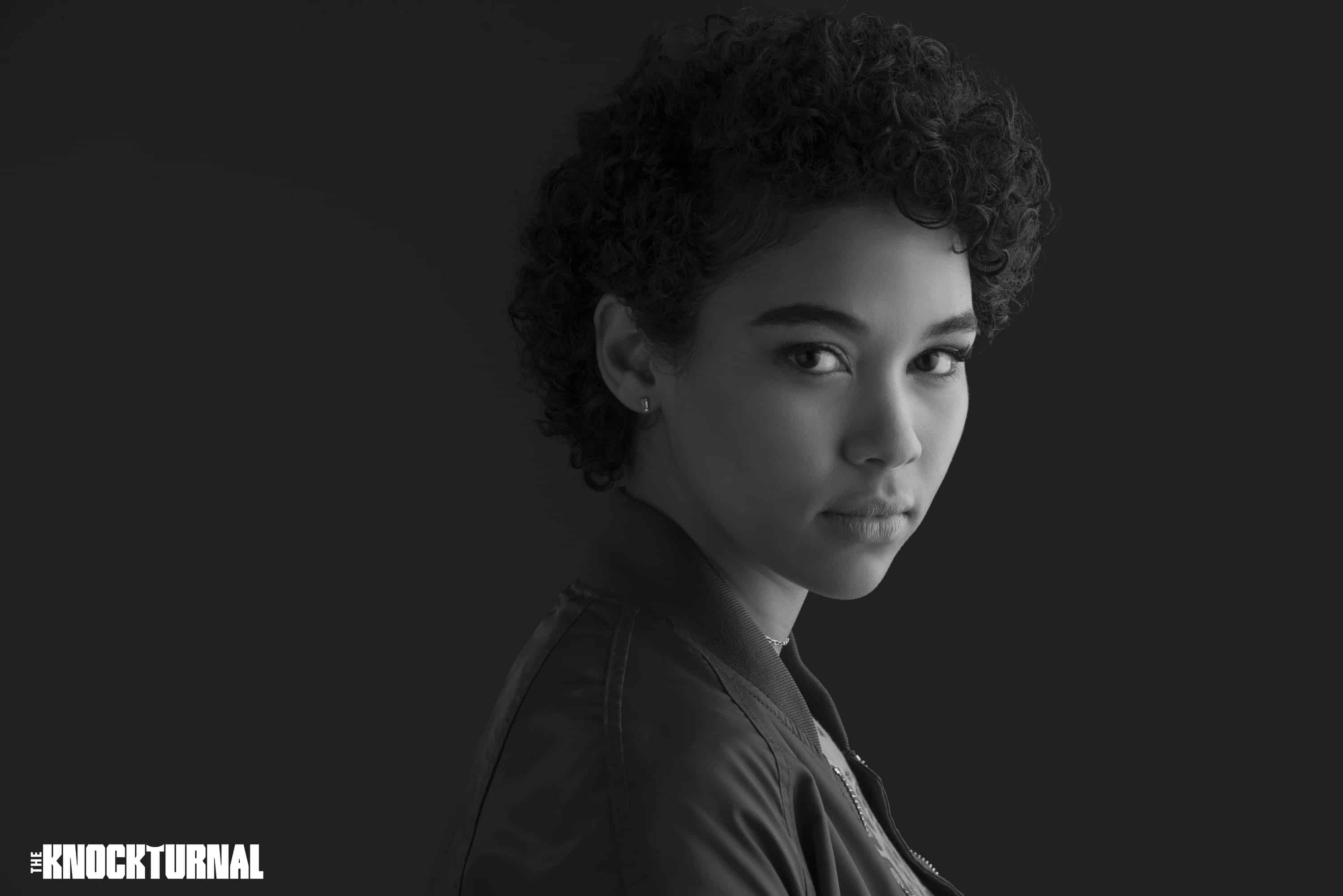 “As human beings, we’re always focusing on our worst qualities. But I think that I’m very confident in who I am and what I like and what I don’t like. And I like to have clear, healthy boundaries,” said Shipp. “A lot of that I’ve learned through my family, a lot of that I’ve learned through therapy and how to deal with situations. And I think that as human beings if we’re open and honest about what we want out of this world, we can have it.”

One thing Love, Simon does extremely well is directly addressing the fact that Simon is in a privileged position and is aware that he has a supportive family, accepting friends and a mostly understanding community when that isn’t always the case for a good fraction of LGBT youth. Nevertheless, Shipp believes that Love, Simon takes a crucial step in revolutionizing the film industry, and the need for an essential shift to produce content that fits a wider demographic of people. So often we see the same story told over and over, but films and filmmakers are slowly starting to broaden representation and are releasing content that is more representative of audiences.

I hope that it’s a monumental shift and it helps create that. For me, personally, I just want the start of [a] positive viewpoint and a positive perspective within [the] entertainment industry when it comes to LGBTQ teens. Because these are human relationships and these are common relationships and we need representation for that because we need people to be able to relate to our stories on all fronts. We want to speak to everyone when we’re telling stories we want to have conversations with everyone.

Additionally, Love, Simon sheds light on a phenomenon that unfortunately is more common than it should ever be. Simon is outted publicly against his own accord in the film. Shipp hopes that the movie inspires LGBTQ teens to not be afraid of rumors and that it reassures them that they are the ones in control of their own journey of self-acceptance and in how they choose to share their identity with their loved ones and the greater community. 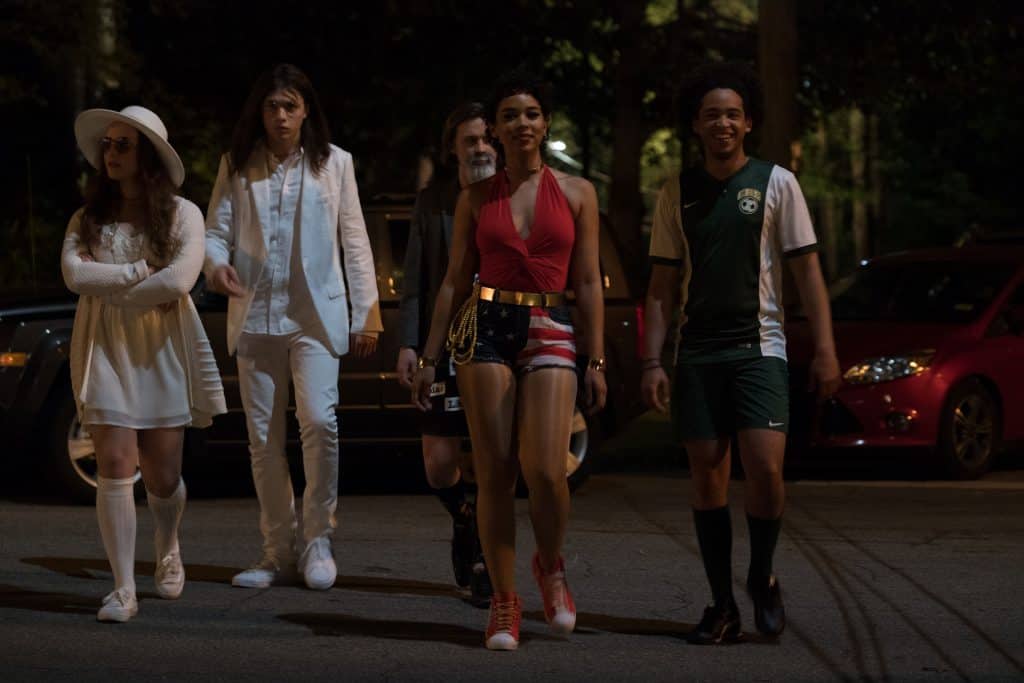 “I love that the movie asks the question, ‘Why don’t heterosexual people have to come out as well?’ Like the minute you start liking someone, you should be like, ‘Okay, this is what I like … you know?’ The film features an imaginary montage highlighting such a scenario. “I just think that what [viewers] can take away from this is that they can always be their truest selves and not have to worry about anyone else having their truth for them.”

Love, Simon highlights not just the beauty of deeper, romantic relationships, but of the strong bonds between friends and family members as well. According to Shipp, love is something that surpasses all boundaries and needs no explanation. “Love is something that I can share with someone and be my truest self around. I can be my weirdest self, I can be laughing and goofy or I can be really serious and I can be super vulnerable and sad in front of. I think love is being able to be in your own skin with the person that truly understands you,” said Shipp. 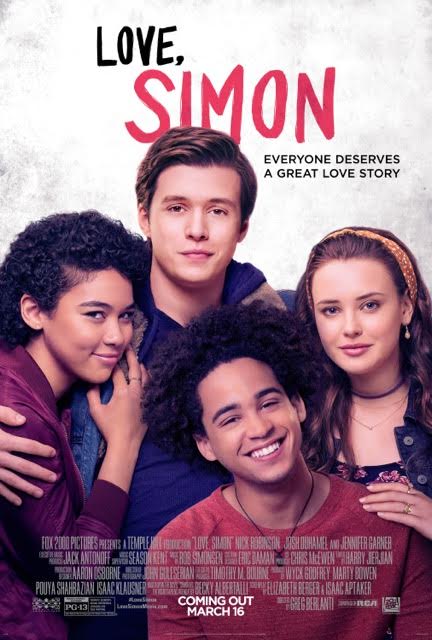 Shipp recently was named the recipient of Max Mara’s Face of the Future award in Milan. She is also reprising her role of Storm in the upcoming film X-Men: Dark Phoenix this November.

See Shipp on the big-screen as Abby Suso in Love, Simon starting March 16th and check out a trailer below:

Scoreboard: Music At The Academy Awards