‘A Sip with Vodka’ Combines Drag, Housewives, and Comedy at the World Premiere

At the world premiere of the pilot for ‘A Sip with Vodka’ in New York City, we met the cast and crew and watched the new internet series.

On a snowy New York City night, the cast and crew of the new pilot A Sip With Vodka hosted a premiere of the new web series. The series, a send-up Bravo shows like The Real Housewives of New York and the like, is a comedy showcase for some up-and-coming talent in the city. 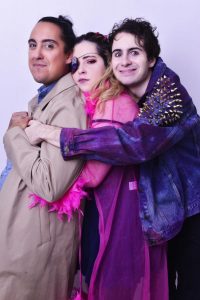 Tai Leclaire, Sarah Lazarus, and Andy Vega in character in a promotional still for A Sip With Vodka

The premiere party included the cast and crew of the show, as well as large amounts of, well, vodka! The series stars UCB comedian Andy Vega and writer/creator Sarah Lazarus as two Russian immigrants who come to New York City hoping for fame and fortune. The series also features cameos from RuPaul’s Drag Race queens like Thorgy Thor and Phi Phi O’Hara.

The pilot, now online, is a comedic tour de force, with special consideration for the current college student Vega and supporting player Tai Leclaire. Leclaire is currently working as a writer on an upcoming NBC series as well as starring in this premiere. Director David Kahawaii spoke about assembling the cast and crew and making a fully inclusive series for everyone involved. The pilot is funny, queer, and engaging. 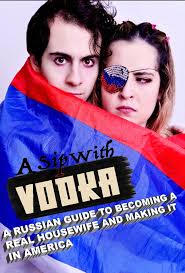 The poster for A Sip With Vodka

Lazarus (who also created the show and wrote the pilot along with Shannon Constantine) spoke with me about the making of the show. “I chose everyone specifically on my team because… I wanted to be surrounded by positive people and positive energy. People who were passionate about the project.” Sarah and her hard work clearly paid off. The cast* is filled with all sorts of talents, including musical and performance stars of the city. It also has budding talent behind the scenes as well, with composer Billy Recce; cinematographer Caitlin Bury; and editor Ryan Shearin all doing great work. Spending time on set, it was amazing to see how well everyone worked together like a well-oiled machine.

Lazarus, Recce, Kahawaii and more had all previously collaborated on the acclaimed webseries Rachel Unraveled. With A Sip with Vodka, that talent only increases.

You can watch the trailer for the series below!

* — Note that writer Liam Haber appears as an extra in the pilot. Liam attended college with some of the cast and crew.

The Foodie Guide: Where to Dine This Valentine’s Day