After watching Christopher Quinn’s new documentary, ‘Eating Animals,’ perhaps all the new, millennial food trends are actually onto something…

Finding vegan or plant-based alternatives is easier now than ever before. Not to mention that it feels like there’s a new farm-to-table restaurant or healthy-fast joint popping up on every other block (especially in a food and fitness-centric city like New York). But what about the rest of America?

Based off of Jonathan Safran Foer’s book of same name, Eating Animals puts factory farming on the disassembly line. The eye-opening documentary provides a first-hand look at the moral, environmental and economic implications of mass-produced meat and poultry.

Now, to my dear omnivores, before you exit out of this computer tab whilst shaking your head at the coercive stigma associated with the vegan and vegetarian movement, I would like to point out that the film neither directly advocates for these “restrictive” diets, nor shames the average American for indulging in meat or poultry-based food items. On the contrary, Eating Animals simply provides an insight into the world of factory farming from the perspective of the farmers directly affected by it.

Eating Animals plainly asks viewers to face the reality of where their meat truly comes from.

The undeniable, difficult truths of factory farming left many American farmers with no financial choice, but to succumb to the corporate umbrella of the meat and poultry industry. “No one fired a pistol for the race to the bottom,” noted producer and narrator Natalie Portman in the opening segments of the documentary.

Not to mention that this “race to the bottom” has left our planet home to a multitude of Pepto-Bismol colored, pink lagoons in North Carolina, which continue to collect pig excrement and urinary waste. The UN even accredits raising animals for food as one of the top 2 or 3 contributors for destroying the planet.

According to the film, the contents of these neon pink ponds, in turn, poison the surrounding soil and make their way into nearby water supplies, wiping out and infesting the fish that inhabit them, and even attribute to a rise of human illness in the dependent communities.

This same sprint to the underside of farming paved a way for pharmaceutical companies to dispense a greater quantity of antibiotics to factories for animal fattening than we use for human treatment. The need for fatty livestock and poultry results from deprived, immoral breeding and shelter conditions found on these manufacturing plants.

One farmer unveils how “turkeys have been so genetically modified that they’re not capable of having sex.” In other words, they are all artificially inseminated and fed drugs, just so that they can survive and later be slaughtered. 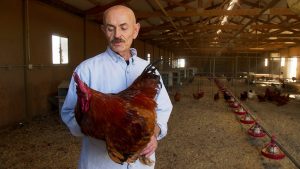 Additionally, the documentary highlights farmers who have crusaded to revert farming back to its original state from its current, efficiency-driven conditions. Although farm-to-table dining, grass-fed meat and organic poultry are available for purchase by the upper-middle class, why should we poison the rest of America with unhealthy products distributed by factory farms?

While the film impressively juxtaposes beautiful, cascading landscapes against grotesque, jarring manufacturing conditions, it fails to pose a solution for the issues the documentary has so deliberately presented.

Regardless, I found Eating Animals a necessary and artfully composed stepping-stone for a more extensive conversation America so desperately needs to have.

Check out a trailer for Eating Animals below!