A new extreme talent show has come to TBS and The Knockturnal sat down with its celebrity judges.

In the first episode, both Rosario and Jennifer got in on the action and became part of an act – being swung around on the shoulders of a Mongolian strongman.

“My level of excitement was always just through the roof every single day and I had to remind myself that this is really dangerous,” actress Rosario Dawson said. “It honestly was one of the top experiences of my life. I love swings and I just couldn’t believe that I was swinging off this man’s shoulders.”

Country singer Jennifer Nettles said, “There were several moments during this show that I had to remind myself these people are professionals, they have been chosen because they have spent hours and hours at what it is that they do. And while there are elements of danger, these people are well prepared for these moments.”

When asked by Knockturnal contributor Kayla Brantley if the judges have any hidden, special skills that would qualify them for the Go-Big Show, comedian and show host Bert Kreischer said, “I have incredible, shoot from the hip accuracy. I prove it in here. If you give me a bow and arrow, gun, baseball, a rock – I have insane, literally instinctual accuracy.”

Wrestler Cody Rhodes said that his skill is tying a cherry stem with his tongue! 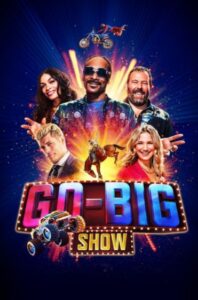