On September 25, Writer and Director Reinaldo Marcus Green joined the cast and crew of Monsters And Men for a special screening at the Brooklyn Academy of Music.

Among the cast members were John David Washington, Anthony Ramos, Chanté Adams, and Cara Buono, who each stopped to talk about their influences and the research conducted in telling the story of an untimely police killing of an unarmed black man.

The Knockturnal: Was there anything in your research about the NYPD and their day-to-day operations that you found to be surprising?

Reinaldo Marcus Green: You know, anytime you’re dealing with law enforcement, it’s a difficult topic, and whether they were going to embrace us or not, it’s a difficult subject matter. We had open arms from the NYPD–at least from the Brooklyn North Group, who we had direct contact with us. We had to share our script, which is pretty fair, but you know, there’s things that happen. There’s a killing of an unarmed black man at the hands of the police in the film and so, to know that they were willing to find some sort of common ground was interesting. It was a revelation! They allowed John David to go on ride-alongs for a month and Cara Buono [too]. So they were really able to put in the time with real NYC police officers —we didn’t have to cut corners. We [also] had some consulting over the phone. So just the ability to access police officers in a way. I think we live in a fear-based culture. It’s like ‘oh, there’s a cop, I’m going [the other] way.’ And it’s just nice to say that not everyone is one or the other. There’s still people who are trying to do good in the community.”

Cara Buono: So John David and I play partners [in the film]. And during the ride-alongs the cops were showing us how fast they drive and do this thing where they cut through traffic. I said ‘I don’t know if this is really going to inform me [as an actor] because I feel like I’m going to die!’ And then we got a call where there was a stray bullet and a little boy got shot, which was very emotional. It was really informative because it was real and we got to be in that environment. And I had called a few female officers to get their take on some of the things that happened…Blue is stronger than any color — blue sticks together. And that was really interesting to me and interesting not to be judgmental, you know, like how I personally feel about the subject of the movie but how I portrayed a character who may not have reacted the way I would. 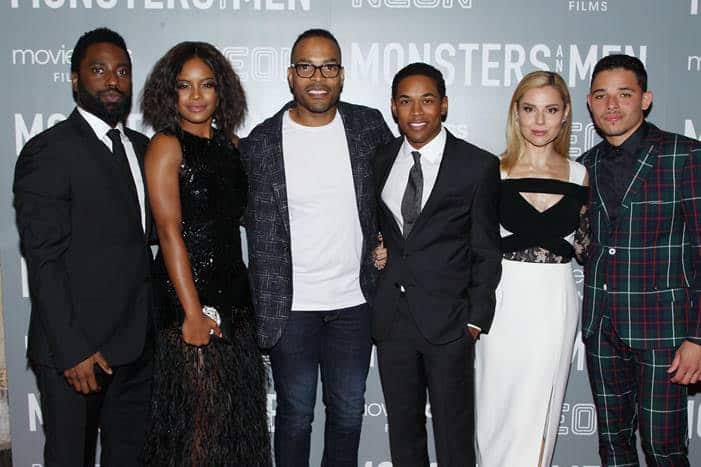 Chanté Adams: Reinaldo had us watch a documentary called Whose Streets? and one of the people that really influenced my character was Brittany Ferrell. Watching her and going to watch [other] activists kind of made me realize how strong they are to be able to wake up everyday and choose to fight. Because they could choose to ignore and they could choose to coast throughout their day but they wake up everyday ready to bear a burden. I have a whole new respect for them and the strength that they possess.

The Knockturnal: John David’s character, Dennis, never quite takes a stance after the police killing, while Manny does. Do you believe actors should take a stance on social and political issues discussed in the films they represent?

Anthony Ramos: I think we all have a social responsibility. I think it’s one thing to post about something and it’s another thing to do something. Anything that we are passionate about, any injustice that feels wrong inside of us, that we feel the need to respond to, we should, I think always in a healthy way and in a productive way. I think we should go ahead and go out on a limb and overcome those fears and do it.

Cara Buono: I think actors, if you’re lucky enough, you get noticed and therefore you might get a platform. So you do have a platform to say things that are important to you. I think it’s personal for every actor. Some people do a lot of things behind the scene and they don’t talk about or they’re [too] shy. And then if you feel really passionate about things and you have that platform, it’s a great responsibility. So I think it’s just personal and it’s a great responsibility.

John David Washington: The films that I have been apart of, the films that I’m blessed to be apart of, speaks on what I’m passionate about. I hope that viewers will gain understanding, perspective, and inspiration to find the language of coexistence.

Cara Buono: I just love working on the show. I think every actor you meet will say how grateful we all feel to be apart of such a creative show that people watch and the fans are amazing. I love the fans. I had a gut instinct that it was going to be good. Like I definitely pursued that project like I pursued this one. If my agent’s here, she’ll tell you. She said ‘you really wanted to be in the show.’ I didn’t think it would be this phenomenon. I mean I thought we’d get some seasons out of it, people would like it and enjoy it, but I don’t think anyone could have predicted the phenomenon, no one can ever predict that.