Daniela Taplin Lundberg is the founder of ’Stay Gold Features’ – a New York based film finance and production company, that is female lead. She is also the producer of critically acclaimed films “Harriet” directed by Kasi Lemmons and “Honey Boy” directed by Alma Har’el.

As I was walking towards her office – the architectural build of the space was an instant reflection of Daniela’s open and inviting persona – with floor to ceiling glass doors, combined with open windows that reflect a breathtaking view of the city. I was a little nervous, but as soon as Daniela said “hello” – her instant warmth calmed me. I’m thinking to myself ‘I need to do this interview justice, this woman’s work is important’. There was a kindness to her eyes but an immediate sense of leadership that Daniela characterized. Powerful. It’s in the way she moved, the way she spoke and the way she carried herself. Despite being in awe of her presence and impressively important catalog of work – it was knowing her story and the inner workings of her mind that was the illuminating gift.

Daniela was born in Los Angeles. Her dad was a producer who worked with renowned director Martin Scorsese, on none other than “Mean Streets”. Seeing how that film happened, Daniela remembered Pauline Kael (a notable film critic at the time) who wrote a 2 page article about how the film was going to change the face of cinema. She recounts: “I grew up thinking, what an incredible thing to be able to create art that changes people’s hearts and minds.” Daniela was dazzled by the reception and impact of films. She also loved the excitement, the family that was created on set and all the different dynamics – “I remember thinking I want to do this.”

However, despite her father being a producer – it was Daniela’s drive and passion for movies, that got her to where she is today. She graduated college in 1998 and really wanted to move to New York. So she interviewed at a lot of the studios in the city. She was torn between being an intern and a production assistant (PA) on a 500,000 dollar budget film. Eventually, she ended up choosing to PA – “someone once told me, the best way to learn how to produce was to see where all the money gets spent and how everything breaks down, and I thought that makes sense to me.” Even though she grew up around production with her family, it wasn’t until she was really in the heart of things that she started knowing how everything works.

The best way to learn how to produce was to see where all the money gets spent and how everything breaks down.

After that PA job, Daniela started producing little films here and there. Her first film was one called  Intern – she remembers: “We were really young and I didn’t know what I was doing, but I was the producer.” Sometimes you just have to push yourself . You need to believe in your potential and Daniela is an incredible example of someone who did that, and it worked. On working on Intern – she said “You figure it out. It was really trial by fire. The way I got through it was just being really diligent. I was on it. I paid attention. I was the first one there everyday and that was like my grad school. I made that movie and I was super on-top of everything and if I had a question I could call my dad, if I really didn’t know the answer. But really it was just showing up and pushing through things that I didn’t understand and asking questions and pretending like I knew what I was doing.” 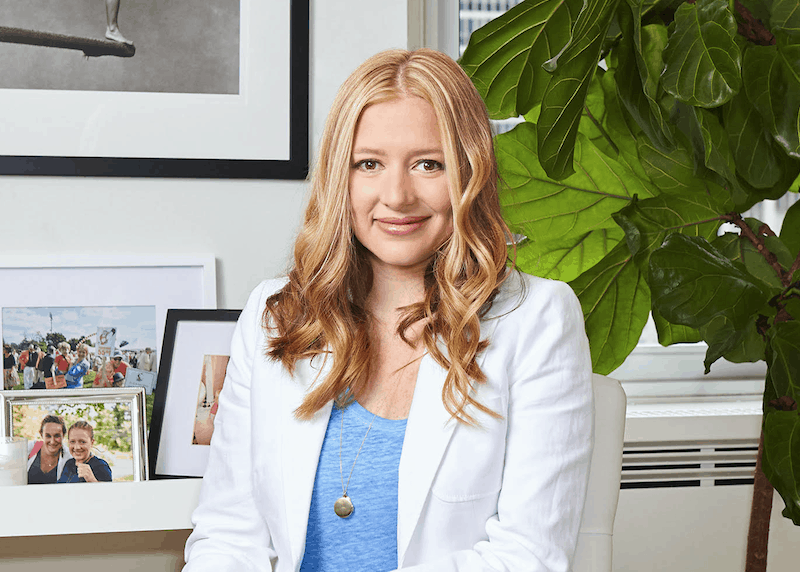 Since then, Daniela has been in the industry for over 15 years and it was a lot of trail and error. It wasn’t until The Kids Are Alright which was a film that she was a part of but didn’t completely take the reins on. That film changed her approach and mindset regarding films. Daniela recounts that people passed on the movie and didn’t think there was a market for it, but it ended up having immense commercial success. “It was suddenly the light bulb for me that I was like – oh If I’m going to be making movies, I have to really put all my efforts into movies that I think will have real commercial appeal and be important in their own right, and really affect people.”

Daniela founded her company “Stay Gold Features”  in 2016 and the first film the company produced was “Patti Cake$”. The film made it to Sundance and since then, it’s been film after film and immense success for the company.

It’s a beautiful story to go from a recent college graduate who was doing anything needed on set from cleaning bathrooms, scrubbing floors, making $300 a week – to growing into being the head of a production company like “Stay Gold Features” – and then – to end up producing two of the most remarkable films of 2019. “I would say Honey Boy and Harriet are really the first films from my company that feel like I have my handprints all over them. They were really things I took big big risks on and I really believed in.” Both of those stories are breathtaking in their own right. Daniela is a believer in striking storytelling – one of the things she says is that “Script is everything. You’ve got to really have a tight script if you want to have a good movie. Sometimes you can have a great movie if the script isn’t great, but it’s unusual.”

Production is a living, breathing thing. Sometimes things go according to plan, a lot of the times they don’t – and you have to be able to adjust.

Honey Boy came to Daniela in January 2018. A mutual friend of hers and director Alma Har’el had sent her the script and said “Read this, it’s extraordinary. Shia is recently out of rehab. He wrote it there but you have to read it.” So Daniela read it and instantly wanted to do it but she was scared about Shia’s commitment to showing up, because he just got out of rehab and there were a lot going on with him. Daniela ended up flying to LA and meeting with director Alma and Shia himself. She said “Shia told the whole story of how he had been on the set of Peanut Butter Falcon, he had been arrested, he had been thrown into rehab again – and that he was encouraged by his therapist to write things down, because they had to figure out why he kept self-destructing” and Honey Boy is what came out of it. Daniela was recounts Shia saying “If you make this movie, it will save my life” – and she started crying over Shia’s honest truth. She believed him. In that room, she made her decision and decided to go forward with the project.

Script is everything. You’ve got to really have a tight script if you want to have a good movie. Sometimes you can have a great movie if the script isn’t great, but it’s unusual.

With Harriet directed by Kasi Lemmons – Daniela says that “Disney had the film in 1996 but they were never going to shoot it, it was just sitting.” She believed in making this story happen alongside director Kasi Lemmons – and so she partnered up and got it out of Disney. Daniela was on set almost everyday, she says “The independent producer in me, the sort of old school producer loves to be on set and be a part that community, and just really help shape the film as we’re shooting it.” However, as her business has grown, so has her personal life, with 3 kids – she’s had to make choices and prioritize her family. Therefore, she’s not on set as often as she used to be, there’s an admirable growth in mastering balance and being conscious of one’s everyday life priorities.

On choosing scripts that she works with and stories that she’s gravitated towards, Daniela says: “I think for me – a log line has to grab me before I read a script. I’m getting a lot better about identifying within the first 5 minutes whether it’s something I want to pursue or not. More and more I start to think like an audience member. It’s almost like I’m pretending that I’m scrolling through trailers, and what’s the one I click on. So, that’s what Harriet was for me. I was like ‘Well I would want to see a badass tale of a young Harriet’ — that feels very sticky and exciting.” She describes Harriet as a movie that generations to come will continue to see, that’s how important it is.

Daniela’s work speaks for itself as she continues to be an important voice and producer in film. She prioritizes impactful storytelling and ‘Stay Gold Features’ is a space that continues to create with and for impact. Daniela says “To me, the story is the star now. Whereas 10 years ago it might’ve been ‘oh you got this person to star in your movie, that’s enough’ – and to me, it’s like no, the movie has to be the star now. And I guess that’s just the evolution of me as a producer.”

Check out our coverage of Harriet and Honey Boy below: