Taiba is a multidisciplinary creative from Kuwait and the Founder/Editor in Chief of “3asal” (Pronounced ASAL). A magazine that aims to celebrate and highlight the diversity, beauty and complexity of women from the Middle East and North Africa (MENA).

Taiba is currently studying interior design and fashion and communications at Parsons School of Design. On attending school and moving to New York City she says: “I wanted to get out of my comfort zone a little bit. I had no idea about anything to do with New York before I moved here. It was kind of on a whim. It’s so different from anything I’ve done before.”

The work that Taiba is doing with 3asal Magazine is important, it’s the first of its kind. Narratives of MENA girls have been widely discussed through a Western lens. However, with young women like Taiba who are tired of such representation,  the narrative is now shifting.

I met with Taiba in Soho, she was wearing her staple color – pink – and had the most inviting energy. Throughout our conversation, I could feel her passion and purpose in everything that she said. For being as young as she is, she’s focused, driven and knows exactly what she wants to do. 3asal feels like her purpose and her baby. She recognizes the responsibility. Although the magazine is completely run by Taiba alone, it’s bound to reach many and serve as an important space of celebration and inspiration to many more. 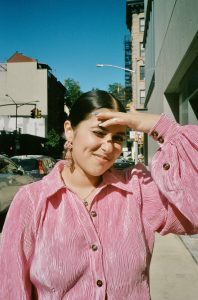 The Knockturnal: Let’s start with you starting the magazine. Where did you begin and why do something like this in the first place?

Taiba: “I feel like my whole life growing up, I really wanted to work in fashion because I loved magazines. I loved flipping through magazines and seeing all these cool girls doing all these amazing things that I wish I could do too. When I was younger at this phase, maybe like 13, 14, 15 – I didn’t believe that anyone where I’m from can be like one of those girls or pursue the things that I was seeing and admiring. As I grew older, I realized that our culture doesn’t have to exist to conceal us and silence us. We just do not have the platforms to embrace our girls, that are shredding these toxic societal standards. My generation, we are done with that. So many of us are sick of the beauty standards, how are bodies are policed and our role in society. When we leave that mold, we don’t have platforms that can embrace us, support us and celebrate us. So, I wanted to create a platform for young girls – so that they know they can be celebrated.”

The Knockturnal: When you were working on that first issue of 3asal, you posted on your instagram story that you were looking for stories that were more diversified throughout the region. You wanted to highlight more Palestinian narratives and if anyone had a story about ‘hair’ – I think you felt like the magazine needed those perspectives and stories. I think it was interesting and important to see that you were very conscious about having a diverse range of MENA women highlighted. I feel like in ‘Western’ media, MENA women are showcased as ‘one thing’ and here you are with a platform that debunks that one-dimensionality.

Talk to me a little about that consciousness that you had when making “3asal” magazine.

Taiba: “I feel like going off what you said about how we’re displayed in Western media and how we’re portrayed so one dimensionally. I think that’s so ironic because we have some of the most complex identities out there in the world. That comes with so much diversity, experiences, stories and opinions and I don’t think even the network of girls that I know are enough to represent that. So I really wanted to reach out to whoever was exposed to what I was doing that wanted to put their voice in, and I really wanted to represent more than what I was exposed to and my experience, because that’s not the only experience.”

I didn’t believe that anyone where I’m from can be like one of those girls or pursue the things that I was seeing and admiring. As I grew older, I realized that our culture doesn’t have to exist to conceal us and silence us.

The Knockturnal: How was it finding all these different women. Was it just through social media? Was it you reaching out to certain people? Specifically the girl that was on the cover, Nadia – and the decision to having her be the face of the first cover.

Taiba: “I’m going to start with the network of girls that I worked with as a whole. I feel like that was the most amazing and inspiring part of the whole process. Growing up in Kuwait, you’re not exposed to that many people, because it’s such a small place. Moving here, I was exposed to so many different parts of our community. I worked with so many people from the Arab-American diaspora, including Nadia who’s on the cover and listening to their stories and their experiences are so different from girls that I grew up with and girls from the region. I worked with a couple of girls here that were born and raised in the States or migrated here. Towards the end of the process, when I was wrapping up my work on it, I opened the platform up to submissions. I got submissions from all over, from girls in London, the UAE, Saudi, Kuwait, so many others it’s slipping me right now – but it’s like a huge diverse group of girls in the magazine which is exactly what I wanted. It was amazing that I got to do that  because it’s not easy.

And the girl on the cover, my girl Nadia. Nadia Azmy is this really boss ass creative that’s based in New York right now. She grew up in the States but she’s originally Egyptian. I’ve just been following her on instagram since forever, she has the best vision, she’s amazing… I wanted to get her on the editorial that I did about the legacy of Egyptian cinema, I thought that would be so fun. I asked her about her relationship with Egyptian cinema and who she admires from that era, and she said Soad Hosny for sure. So, I thought it would be cute to style her as Soad. It was like a really dramatic and fun shoot that we did, and it made the cover.” 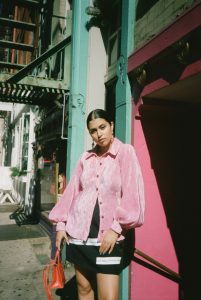 Taiba: “Oh yeah, no one in the magazine was just thrown in there as my model. We were all working together. Everything was a collaboration.”

The Knockturnal: Talk to me about some of your favorite pieces in the magazine or maybe a piece that you saw come to life and it made you proud to see it all come together.

Taiba: “One of my favorites in the magazine is actually a submission. It’s an editorial by my friend Latifa, who is a stylist and creative and she’s based in London but she’s Saudi.”

The Knockturnal: Was she the one that took the photo of the 5 girls?

Taiba: “Yes! It was amazing. I’m so happy that she sent that to me because it turned out to be one of my favorites. It was so colorful and cute and everything that the magazine embodied. The photos were so beautiful.”

The Knockturnal: So you’re a an overall creative and photographer on top of being a magazine curator? Do you call yourself a curator?

Taiba: “I don’t even know. When people ask me what to call myself, I never know what to say. I feel like I’m a multidisciplinary artist because I work with so much and so many mediums. My thing is photography and art direction, I love doing that.”

The Knockturnal: Talk to me about naming the magazine 3ASAL (which translates to HONEY in Arabic) and just the story and meaning behind the logo overall.

Taiba: “I went to so many Arab supermarkets. I had my mom send me pictures of honey jars from Kuwait and they’re always like little boys on it in their dishdasha and little honeybees all around with horrible photoshop. And I was like that’s my logo (laughs) but with me on it.”

The Knockturnal: And what about the name of the magazine?

Taiba: I love the word 3asal – It’s so cute, I’ve always loved it. I feel like the connotation that comes with it in Arab societies is just like something that’s very palatable and young and innocent, and I wanted to redefine that to represent all of us, all of our complexities. 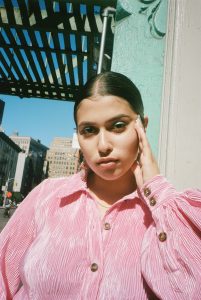 The Knockturnal: Talk to me about the growth of 3asal. I feel like it was such a beautiful and gradual growth for the magazine, that I saw firsthand – because I did follow it when it was still in a super small scale before the official launch. People were just so gravitated towards the idea and the potential that the platform had.

I want the little girls to get their hands on it. I want it to be bigger than just an underground little mag.

The Knockturnal: How do you see 3asal growing and what’s your overall goal for the magazine?

Taiba: “I want to commit to it and keep going and give it everything that I have. I really want to do more collaborations in the future. I want it to be stocked at a wider scale because I feel like that’s what our purpose is. I feel like right now it’s super underground, it’s super like if you know you know. But that’s not the audience that needs it. I want the little girls to get their hands on it. I want it to be bigger than just an underground little mag. I definitely want to grow it to where it can be accessible to more people.”

The Knockturnal: Outside of 3asal, you have your own following and style. Do you feel like that’s something that helped the magazine in any way?

Taiba: “Totally. In the past year, moving away from the Middle East and Kuwait – I feel like when you’re back home it’s more of a big deal like ok you have this platform, you get all this work all the time, and you’re working with all these brands… When you move here, for me, I kind’ve lost touch with my purpose for a little bit, just because I’m such a small spec in such a huge city and I don’t have that same impact as I did in the Middle East. I wanted to make something of the platform that I had and I wanted to use the privilege that I have of having this platform to make 3asal, and escalate it into something good.”