As far as fairytales go, “Honeydew” is more of a cautionary tale than a happy ending. The highly-anticipated film was originally slated to premiere at this year’s Tribeca Film Festival and debuted this weekend during the virtual Nightstream Festival.

The strikingly visual horror film Honeydew centers on couple Sam (Sawyer Spielberg) and Riley (Malin Barr) as they road trip through the woods. After their car breaks down, the duo seek help from elderly farmer Karen (Barbara Kingsley) and her odd son. Let’s just say their evening does not go as planned.

Described as a modern, darker retelling of the fable “Hansel and Gretel,” Honeydew is a masterful feature debut from writer-director Devereux Milburn. Below, The Knockturnal speaks with Milburn about his cinematic inspirations, working with Steven Spielberg’s son Sawyer, and bringing his childhood fascination of genre films to life onscreen.

The Knockturnal: Honeydew is such a fascinating story. What was the path to your directorial debut?

Devereux Milburn: I had been writing a feature script out of [NYU] Tisch on the George Saunders short story called “The 400-Pound CEO” for about two years when my friend Dan [Kennedy] texted me, “do you want to make a horror feature next month?” I said yes, and the idea was sort of to pull together $5,000 and use our friends, and it grew from there. It was a sort of basic cabin in the woods concept, a 70-minute film and grew partly out of my being immersed in another script about a guy struggling with his weight, and also from my fascination with people who have addictions to anything, whether it be food, drugs, alcohol. That’s something that’s always really intrigued me, and I don’t think I’ve met anyone who doesn’t have some little vice or addiction, however strange or however basic. I sort of just organically injected that without realizing it into this story. There are some characters who are either parts of me or parts of people that I know or are in my family, and definitely a lot of influence from some of my favorite horror films and genre films. The story started as a very small concept and became something a bit bigger over the course of the nine months until we shot in September 2018. 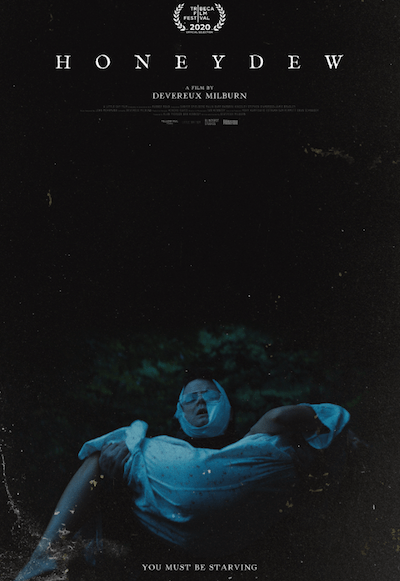 The Knockturnal: What was the production process like? Where did you film?

Devereux Milburn: We were on location outside the Berkshires, mostly in Pittsfield, MA. It was an eleven-day shoot and it was crammed. It was an average of eight pages a day, which I don’t necessarily recommend, but the budget sort of called for it and it wound up making the scenes all the more intense. The scene towards the end, the climax, took three days. The weather also changed drastically. On day three or four, it went from almost 100 degrees to 30 degrees. It was just a product of it being shot in September. To some degree, it was sort of run-and-gun. It wasn’t entirely shot that way, but there were a number of injuries– not horrible injuries, there was one minor hospitalization, and I fell off a car at one point when we were shooting a couple of the driving scenes. There were rampant poison ivy infections. The director of photography, Dan [Kennedy], and the production designer Kendra Eaves got really bad poison ivy. For some reason, none of the actors did, I don’t think. So there was some of the typical pitfalls of working on a bit of a small budget on a rural area. But I think it all added to the ultimate effect of shooting a horror movie.

The Knockturnal: In past interviews, you’ve referred to Honeydew as a modern-day Hansel and Gretel story. Would you consider other fantastical directors like Guillermo del Toro among your inspirations? Who are some of your favorite filmmakers or films that you drew upon?

Devereux Milburn: Definitely Guillermo del Toro. Pan’s Labyrinth was definitely a favorite of mine when it came out. I would say Ken Russell’s The Devils is in my top five. Rosemary’s Baby is one that I just sort of refer to again and again, especially in terms of how [director Roman Polanski] uses the camera. It’s a lot more contained than your average B-horror film and that really appealed to me, and it’s a bit closer to my style. John Carpenter’s The Thing is obviously a big influence; Don’t Look Now, pretty much anything by Nick Roeg; Audition, Takashi Miike is a huge influence and has been since high school. I’ve been obsessed with his films, mainly Ichi the Killer. The Omen is also a big one, just about anything by Dario Argento, Suspiria, Poltergeist. Also, I’ve always been a huge fan of David Cronenberg’s films. It’s funny, most of his films are really graphic and I’ve never really been able to figure out why– even though I’m such a huge fan of his work. I’ve never leaned towards revealing a lot of blood and guts, at least at the outset, and when I do it’s really sparsely, but it’s also something that really appeals to me as a viewer.

The Shining and The Exorcist sort of started my fascination with horror. When you’re a kid, sometimes your parents have VHS tapes lying around that you’re not necessarily allowed to watch yet, and I just became fascinated with studying the images on the back of the VHS covers. There’s sort of a holiness about it that just stays with you long after you see these films a hundred times. Definitely Brian de Palma, The Fury was a big influence when I was younger. In terms of genre films, mostly films from the 1970s and 1980s. Again, I think it’s partly a function of how fascinated I was by blood and guts before I was really immersed in it, and the contrast of something so completely mature when you’re like anything but mature and how that affects you at a young age. Also the comedy in a film like Ichi the Killer, Rosemary’s Baby or The Stepford Wives, is sort of inherent in my style and the writing that appeals to me the most. It’s sprinkling a little bit of comedy into the grotesque.

Those are the top ones in terms of genre stuff, and just in general, Mike Nichols, Robert Altman, the Coen Brothers, anything that’s really fresh and relatable but also disturbing with edges of humor and satire and black comedy. The list goes on.

The Knockturnal: You also have a nod to classic films in your own film with the casting of iconic director Steven Spielberg’s son, Sawyer, in the lead role. What was it like working with him?

Devereux Milburn: He was so easy to work with, and so much fun to work with. He has an incredible sense of humor about himself and about the work that he does. He really committed to the role and to the world of Honeydew, even when we started auditioning. He’s very down to earth and very separate from the mystique that comes from his father and his incredible talent as a director and just being a legendary force in the film industry. He was incredible to work with. I hope we can work together again on the next project.

‘Detention’ A Chilling Game, But Is It a Chilling Movie?

Highlights From The ‘Feeling Through’ Special Screening &...